For Decatur’s Intown Hardware, family and creativity will survive Wal-Mart 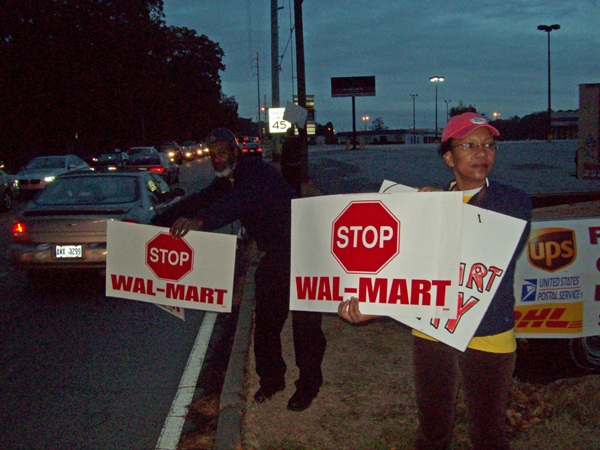 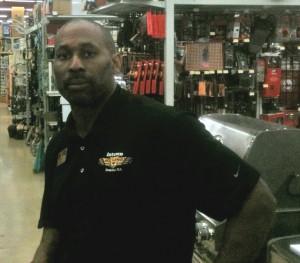 Tony Powers is one of the owners of Intown Ace Hardware in Decatur, across from a planned Wal-Mart development at Suburban Plaza.(Photo by Ben Smith)

Across the road from the planned development, Tony Powers keeps the keen eye and taste that has made his family business – Intown Ace Hardware – survive and succeed. As the world gets more homogeneous, his answer is a more diverse identity.

“I never thought I would have a hardware store with two lines of perfume and seven lines of organic candles,” he said. “Costume jewelry is also hot. I never thought this would be who we are.”

Decaturites have protested Wal-Mart for several reasons, including its potential to big-foot the thriving small economy represented by Intown Hardware and other boutique retailers. 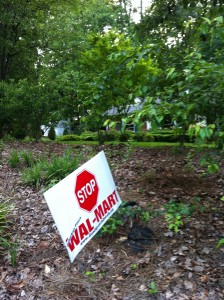 Their evolving eclecticism that mirrors the funky flowering of Decatur itself.

For Powers and his business partner Dave Jones, who benefit from the Ace national buying collective, that transformation meant ordering Adirondack chairs in sherbet colors; devoting prime shelf space to Decatur-logoed license plates and apparel; letting loose with fun events such as a staff Pirate Day, documented on the store’s website.

Walk in at the right time, and you can scoop your own bag of popcorn freshly popped in the old-fashioned cart near the front register. Across the aisle is a counter lined with old wooden baseball bats – collected first by a lawyer who lived next door, who bartered them for rent when Intown Hardware expanded. In lieu of advertising, the store prefers to sponsor youth teams, school auctions and community fundraisers. Ask a cashier about their year-round inventory of Girl Scout cookies.

Americana like that helps Decatur create a small-town feel on the eastern border of Atlanta, and Wal-Mart will test that grassroots support.

“They are going to own the market, especially in storage and cleaning,” Powers said.

He’s moving out the Clorox; in comes the specialty organic cleansers.

“We’re going after unique,” he said. “Topiaries and specimen plants – we just sold a couple of $400 trees. More organic and more local products – Wal-Mart can’t adapt to that quickly or at all.” 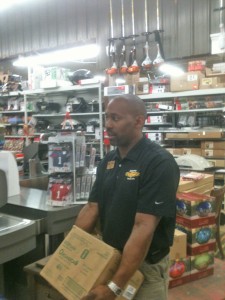 “Their home improvement line, ‘Builders Square,’ rolled out before our present business model had evolved,” Powers said. “We had the first Home Depot up the street too. Fortunately for us, Kmart didn’t know what it was doing.”

Home Depot is still there, and Intown stopped selling lawn mowers and standard barbecue grills long ago. That opened space for building materials for chicken coops and support for school gardens.

Wal-Mart says its nearby Suburban Plaza location will not have a garden center, and Powers is taking the corporate giant at its word. He has made field trips to Bates Ace Hardware (est. 1921) on Atlanta’s west side, to see how it was faring against the Wal-Mart on Howell Mill Road. “We should be fine as long as Wal-Mart does what they say they are going to do,” Powers said.

[Note: After this story was published, Wal-Mart’s Director of Community & Media Relations, William C. “Bill” Wertz, notified me of this correction: “There will be a garden center in our new store. It was overlooked in some preliminary discussions with the community, but we corrected that back in October of 2011. The GC [garden center]  is in our official application and has been discussed at multiple public meetings and approved by the [DeKalb] county board of zoning appeals.”]

Another resource against super low prices is attentive customer service: 30 employees who can find and demo everything in the store, “Wal-Mart can’t match us on that,” Powers promised. “You’re not going to go in there and talk to one of Sam Walton’s heirs, or go to Home Depot and talk to Bernie Marcus.”

More than anything, Intown’s survival depends on support from local families who recognize themselves in the folks behind the counter. Here, Powers works two miles from his childhood home where his mother Barbara still lives; his daughters Diondra and Alexandra have worked alongside him. Jones has two sons, Alex and Andy, who also help out there.

The store was founded in 1984 by a pair of brothers, Doug and Joe Eifrid, a satellite to their successful debut of Intown Hardware in Virginia Highland. The Eifrids built the Decatur store from the ground up, with help from Jones; Powers came on part-time in 1985 at his mom’s insistence (“This is the longest part-time job I’ve ever had!” he joked) and became a partner in 1996. 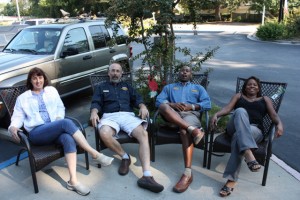 Dave Jones, Tony Powers and their wives chill out in front of Intown Ace Hardware. A family atmosphere may well be a key to economic survival as Wal-Mart moves in across the street. (Store photo)

The long-term question is whether that local DNA and specialization will be enough. Powers figures he’ll take a 10 percent hit in sales off the bat before the Wal-Mart honeymoon ends. He recognizes the myriad of conveniences that a big-box store offers – the wide aisles and deep discounts that a small business can’t touch.

“I love Costco,” Powers said. “I got to Costco religiously. The merchandise mix is phenomenal.”

What got him in the door there, though, was what his store uniquely offers: a friendly face. “One of my [University of Georgia] roommates manages the Costco in Gwinnett,” he said. “If one of those stores had gone into North DeKalb Mall, I would go there every day.”