For deliverance on Appalachian Trail, hikers rely on folks like Ron Brown 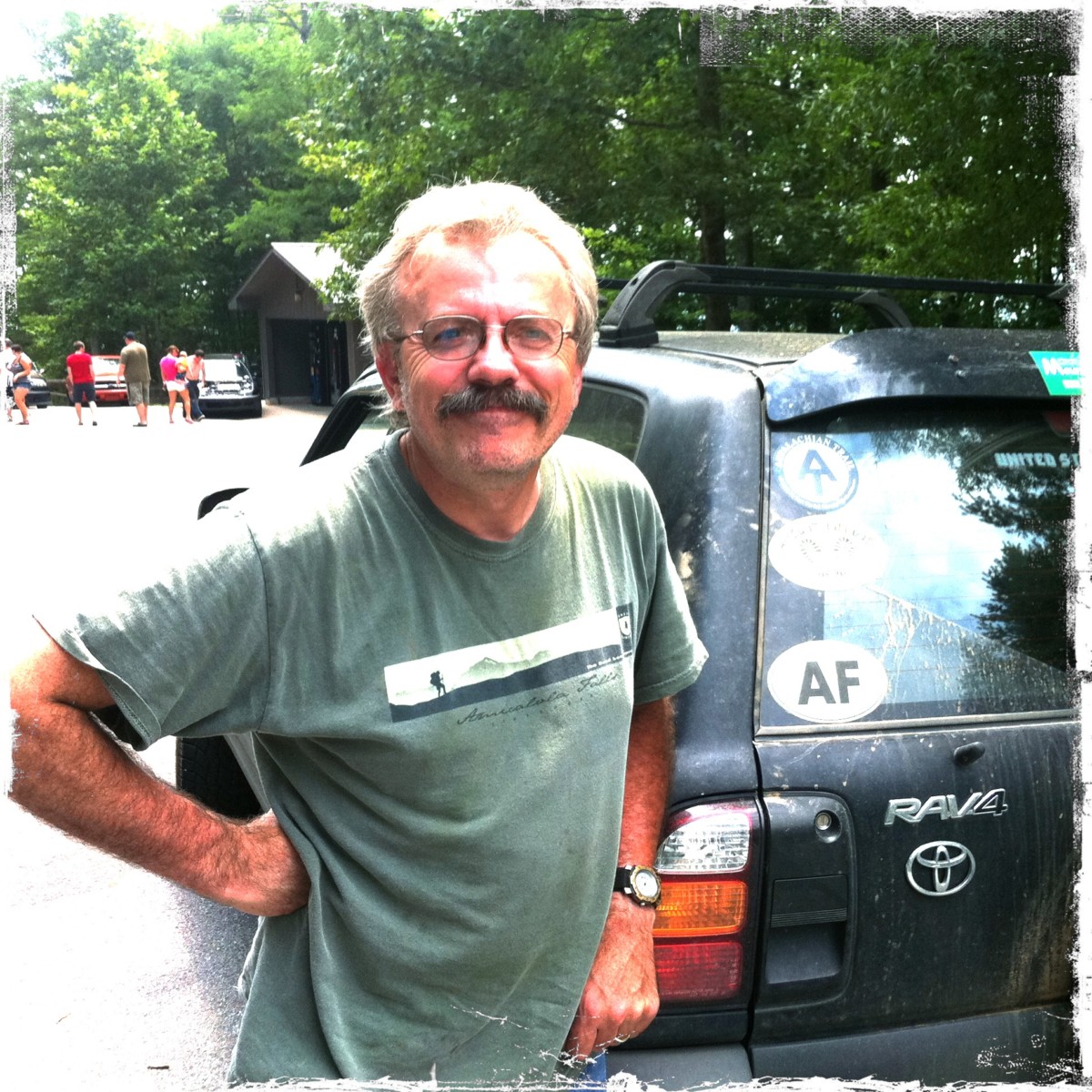 Ron Brown of Ellijay shuttles hikers along the Appalachian Trail, which begins in north Georgia at Springer Mountain. In August, the trail celebrates its 75th anniversary.

On July 20, Atlanta’s Fox Theatre will celebrate the 40th anniversary of “Deliverance,” the startling and brutal film about city dwellers venturing into Georgia’s devilish Appalachian country. 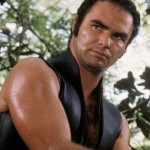 Burt Reynolds was one of the stars of “Deliverance.” The movie’s 40th anniversary this summer coincides with the 75th anniversary of the Appalachian Trail.

A walk in the north Georgia woods today has its hazards, too – but luckily our recent group of hikers got help from a trail angel named Ron Brown.

Unlike the predatory locals in the movie, Brown is part of an super-friendly mountain hospitality corps who serve visitors to Springer Mountain — the southern terminus of the 2,180 mile Appalachian Trail — and beyond.

Thousands of outsiders show up every year to experience the “AT,” the world’s longest hiking-only footpath, which next month celebrates its 75th anniversary.

It was a hellish 100 degrees plus when we cinched up our backpacks for a long-planned overnight trip around Springer. The temperature was still three-digits when we came to our stopping point, a gravel parking lot with a smattering of cars.

The first car we saw had its rear windshield bashed. The inside was a wreck too. Before we could worry that the vandal was still around, we heard the sound of tires on gravel. Out of the small black SUV popped Brown.

“Some people don’t want any help,” Brown shrugged when he looked at the car, which apparently belonged to a hiker who had left on his own during the spring. “They just have to do it by themselves.” 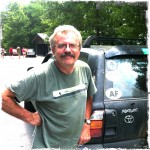 Ron Brown of Ellijay shuttles hikers along the Appalachian Trail, which begins in north Georgia at Springer Mountain. In August, the trail celebrates its 75th anniversary.

For the rest of us, Brown and others serve as mountain concierges. His niche as a shuttle driver exists because even hard-core adventurers (not us) need a lift – by car, carb or pop culture reference.

“If you hear banjos playing, run!” Brown joked to our friends from New York as they continued on the trail. They waved and laughed, and Brown would rendezvous with them five days later near Hiawassee.

Dripping with sweat, we tossed our packs in the back of his vehicle. As wimpy as our two-day, 10-mile trek had been, we luxuriated in the cool reprieve of his black 1998 Toyota Rav4.

Brown’s mountain taxi (odometer: 249210 miles) would take us 22 bumpy, windy miles back to our car at Amicalola Falls State Park. The hour-long trip was like so much of his ferrying all over north Georgia since 2007 (Ron’s Shuttle Service serves the Benton MacKaye Trail also). 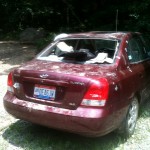 A vandalized car along the Appalachian Trail near Springer Mountain, Ga. was a creepy reminder that a walk in the woods isn’t always safe. (Photo credit: Ben Smith)

Only “thru hikers” spend months making it all the way to Maine; the rest of us need a friend on one end to take us home, unless we leave a car on one end. The vandalized car showed us we had made the right choice.

As he steers, Brown is a storyteller who spins tales off the trail. Like the hikers attracted to the trail, he’s got a lot of heart and a little bit of crazy.

We jounce down a rocky Forest Service road and he points to a curve where on the way to get us he had dodged a large black bear. To converse, we nearly have to shout because the terrain is so rough.

That explains why Brown chose the loudest computerized voice offered for his GPS: “Dr. Nightmare.” It’s so creepy that hikers mention its creepiness on their web reviews of Brown’s shuttles. At one point, the  “bwa-ha-ha” voice shouts, “LET ME CONSULT MY MAGIC BOOK!”

Brown smiles. We hit a big bump. “Was that good for you?” he laughs.

In an earlier life, Brown worked on computer systems for the hotel industry. His transformation into a shuttle driver began after a 2007 incident.

“A hiker didn’t have change for a $100 bill, and the driver didn’t give him change at all,” said Brown, who lives in nearby Ellijay, likes to drive and knows the mountain roads.

“It really bothers me to see people take advantage of others – I hate to see that. After I stewed over that bad taste in my mouth or a few days, the light bulb went off.”

Brown runs his service the opposite manner. Often he’s giving a ride for free – as to the man who got sick while hiking with his son, and Brown took both of them back home. 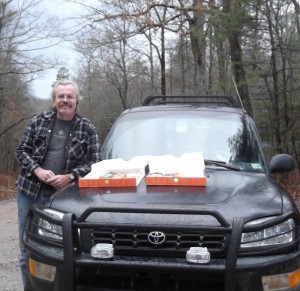 Ron Brown runs a shuttle service and also helps hikers as a “trail angel.” He drops off water jugs along the route, and on a cold rainy morning in the spring, surprised hikers with fresh donuts.

By volunteering to transport distressed hikers, Brown continues the “trail angel” tradition along the A.T. He and others drop off jugs of water and do other random acts of kindness for hikers. One cold rainy morning in the spring, he showed up at a trail gap with fresh donuts – a mirage of carbs for the weary hikers.

“Spontaneous acts of generosity and hospitality provided by ‘trail angels’ are one of the AT’s hallmarks, mentioned in the earliest AT hiker accounts,” said Laurie Potteiger of the Appalachian Trail Conservancy, which preserves and manages the AT.

One step above the angels, she points out, are the volunteers who clear, mark and maintain the trail and dig the privies. Volunteer labor “makes the experience of trail magic possible in the first place.”

Brown gives away mileage partly because charging hikers who are in a jam feels like taking advantage of them. He also sees himself as an ambassador for the trail who can help sway the hiker’s return. “It’s no fun having to get off the trail when you’re sick or something goes wrong,” he said. “Some of them never get back.”

We zip down switchbacks as he describes how much he enjoys meeting people from all over the world – the many Swiss and Canadians this year, after mostly Germans and Australians in the past.  About 2,300 hikers set off from Georgia this year to hike the whole way, and a record number — 918 — have reached the milestone of Harpers Ferry, W. Va. About half of those, Potteiger said, will make it to Maine.

Despite the trail’s spotty cell service – and the hikers’ ostensible desire to get away from it all – their online conversations help Brown stay busy. “The best thing for my shuttle service is the hikers talking about me on www.whiteblaze.net and www. trailjournals.com,” he said.

“GREAT guy for shuttle, LOVE HIM,” wrote a hiker of the trail name Prada, from Jacksonville, Fla. “He’s shuttled me several times and [I] now consider him a friend. He’ll look out for you.”

“He was full of information about the trail with tons of tips and helpful advice,” wrote Robert and Candice Fox, who Brown transported from the Atlanta airport.

The conservancy does not endorse hiker services such as shuttles, but common trail knowledge sets a standard.

“A good hiker shuttler first and foremost is one who is safe and reliable and holds appropriate permits and licenses,” Potteiger said. “A great shuttler is someone who also knows the AT, trailhead access points, and the services available in the [nearest] town.” 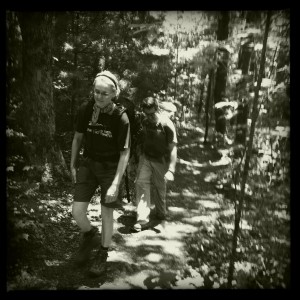 After Sarah Haga and Damon Strub wrapped up a 77-mile hike from Springer Mountain to Hiawassee in triple-digit temperatures, they returned to Atlanta via shuttle driver Ron Brown.

A few days after safely delivering us to our car near the AT’s approach trail, Brown met up with our friends, Damon Strub and Sarah Haga, former Atlantans who now live in Manhattan.

For them, Brown was another memorable personality from a week of crossing paths on the AT with diverse seekers: a Korean mother hiking in memory of her deceased husband; a trio of teenagers (one barefoot, one in flip flops) on a pre-college adventure; a distance hiker whose beard got longer as his waistline got smaller.

They had seen a turtle giving birth, a bear and its baby, and on top of Blood Mountain, the moon so close as to be almost touchable.

The last face of their trail experience was Brown’s. They spent two hours with him as he shuttled them from Dicks Gap to Doraville.

“We talked about his Monte Carlo,” said Strub, who enjoys cars. “Ron’s wife, who is 5-feet tall, can’t open the door. Another time, the axel broke off. It was a great backwoods story and we spent a good 45 minutes of the trip talking about that.”

On the AT, they had crossed a road where six water jugs had been set out by Brown.

“Someone had written a note about how important that water had been to them,” Haga said. “He’s a great cheerleader.”