Nearly 1,000 people were drawn to the historic hangars of Delta Air Lines Tuesday morning for the grand re-opening of an improved and expanded Delta Flight Museum.

Gov. Nathan Deal and Atlanta Mayor Kasim Deal gave their official proclamations and awards in Delta’s honor, which was celebrating its 85th anniversary of offering passenger service. Its first passenger flight was from Dallas to Jackson, Miss. on June 17, 1929.

But Tuesday’s real celebration was more than symbolic. It was another solid sign by Delta to show how deeply rooted the airline is in Atlanta and at Hartsfield-Jackson International Airport. 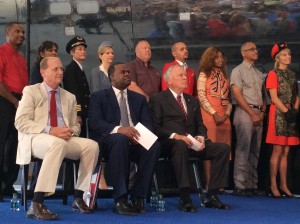 Richard Anderson, Delta’s CEO, thanked the mayor and the governor for providing great leadership, something Delta has enjoyed since it has moved to Atlanta in 1941 from Monroe, La., where it began flying a crop-dusting service to protect cotton from the devastating boll weevil.

C.E. Woolman, Delta’s founder who ended up moving the airline to Atlanta, told company leaders that it would operate the crop dusting service until the day he died. And that’s just what Delta did, discontinuing the service after his death. 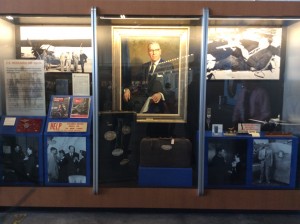 A display in honor of founder C.E. Woolman

“We owe an obligation back to this great state and this great city,” Anderson said of the Atlanta-based airline that operates out of the “world’s busiest and best” airport. “It’s a Delta family. Every family needs a home, and for Delta, this is our home.”

The Delta Flight Museum, which is housed in the airline’s two original hangars, totals 68,000 square feet where it has thousands of artifacts and items on display, including several actual airplanes — both from the propeller period and the jet age.

It includes memorabilia from the 40 airlines that were part of Delta’s family tree – from Western Air Lines to Pan Am to Northwest Airlines.

Delta has one of the largest archives among the world’s airlines, having started collecting its history — from flight attendant uniforms to marketing materials — in the early 1950s. There actually is a matchbook where the individual matches are illustrated as flight attendants. 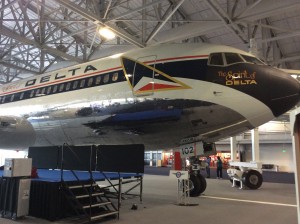 Spirit of Delta plane – donated to the airline by employees

Asked about the future of Delta’s relationship with Atlanta, Anderson said this was “actually the beginning” of a new era.

“We have only success ahead of us in the City of Atlanta,” Anderson said. “The hub is doing incredibly well. We continue to grow new destinations, and this year we will add 1,000 employees in Atlanta. It’s all great.”

The new and improved Delta Flight Museum is part of a growing number of tourist attractions that could be packaged together for people visiting Atlanta.

The Center for Civil and Human Rights will be opening next week. The College Football Hall of Fame will open later this summer. Both of those could be packaged with the World of Coke, the Georgia Aquarium, the CNN Tour and the new Porsche testing track near the airport. 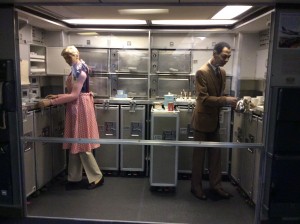 “We do want to develop a shuttle capability” to provide transportation from the airport to the museum, Anderson said.

The chairman and president of the Delta Flight Museum is John Boatright, a retired Delta executive who also had spent several years working for the City of Atlanta’s Hartsfield-Jackson International Airport.

The museum is now open to the general public, and it is open six days a week — every day except for Wednesdays.

The museum houses a permanent collection of five historic aircraft, including a Travel Air 6B Sedan similar to the one that operated Delta’s first passenger flight in 1929, and The Spirit of Delta, a Boeing 767 purchased for the company by employees in 1982. Also on display is a DC-3, Ship 41, that flew for Delta and was restored by Delta employees and volunteers. 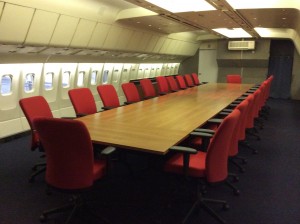 How about holding a corporate board meeting in the body of an airplane?

The museum features a 117-seat theater and a 30-seat conference room located inside the fuselage of an L-1011 TriStar aircraft. Also on display is the cockpit of a Convair 880 jet. Additionally, visitors can have the ultimate aviation experience and pilot a Boeing 737-200 full-motion simulator, the only one open to the public in the U.S., formerly used to train Delta pilots.

A special exhibit honors Delta’s founder and first CEO, C.E. Woolman. The display includes a portrait of Woolman along with quotes and personal items.

The hangar space also serves as a unique public and private rental venue to host meetings, conferences and other events with state-of-the-art audio and video capability and full catering services that can accommodate a seated dinner for as many as 1,200. 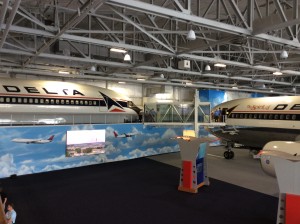 A view of two of the airplanes 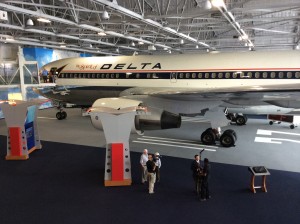 Another view of the Spirit of Delta plane 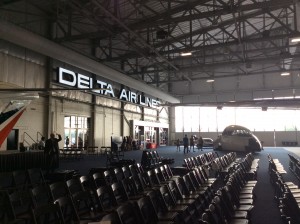 After people have left the event, the lit Delta sign shines on

Previous Article
Eric Cantor’s primary loss no cause for celebration for ‘do nothing’ Congress
Next Article
Judge approves sale of Morris Brown land to City of Atlanta, Friendship