Calling 2020 the “most challenging year in our company’s history, Delta Air Lines CEO Ed Bastian reassured shareholders during Thursday morning’s virtual annual meeting that the airline is experiencing the “start of a meaningful recovery.”

A shareholder proposal calling for a Climate Lobbying Report passed based on the preliminary vote.

The annual meeting lasted a half-hour, three times longer than the usual 10-minute event that normally occurs in a Manhattan office tower.

Bastian told shareholders that Delta went from the highest of the highs in early 2020 to the lowest of the lows.

The highs included the airline awarding a record $1.6 billion in profit-sharing to its employees on Valentine’s Day 2020 to adopting a $1 billion, 10-year plan to mitigate all emissions from its global operations and become the first carbon-neutral airline.

Then the pandemic hit – causing Delta’s business and revenue to plummet along with a drastic voluntary reduction of employees.

“I have never been more proud of the company,” said Bastian, adding that the airline out-performed its competitors and was ranked as the No. 1 U.S. airline by J.D. Powers following the year of uncertainty. 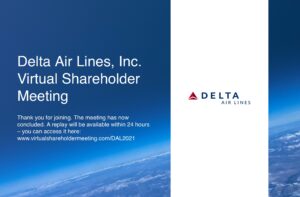 As vaccinations increase and the COVID pandemic has subsided, Bastian said the airline is beginning to see business improve with a pent-up demand for leisure, business, and even international travel. Delta also is returning to pre-tax profitability, Bastian said.

“Throughout the crisis, the people of Delta never lost sight of our values,” Bastian said. That led to the company dedicating greater attention to its diversity, equity and inclusion efforts. “We knew we could do better (to become) a just and an anti-racist company.”

Airline executives received several questions related to its opposition of a voting restriction bill that passed the Georgia legislature.

“Delta’s brand is about uniting people,” said Bastian, who added that the company is working with nonpartisan and bipartisan groups to insure voter access.

A shareholder asked whether Bastian’s position on the voting bill had the support of the Delta board.

Frank Blake, Delta’s board chair and retired CEO of the Home Depot, gave his full support to Bastian.

“We believe Ed is doing an outstanding job as CEO,” Blake said. The board understands that “from time-to-time” Delta executives will weigh in on social or political issues that reflect the company’s values.

But a proposal submitted by BNP Paribas Asset Management called for the company to issue a climate lobbying report and describe how its lobbying efforts track the Paris Climate Agreement. It also called for Delta and airline associations to be more aggressive in adopting practices to minimize climate change.

That shareholder proposal received 46 percent of the vote at last year’s annual meeting, and Delta observers were not surprised that it passed this year. Similar proposals have passed at a number of companies, including United Airlines.