In an unusual move, Delta Air Lines CEO Ed Bastian is issuing an open letter to Atlanta’s business community to ensure Black talent is not being left behind by requiring employees to have a college degree.

Bastian is one of the founding members of OneTen, an organization seeking to have one million more Black employees in skilled jobs within 10 years.

“Our intent with a letter is to introduce OneTen to Atlanta,” Bastian said in an exclusive interview. “It’s not imploring people to come in… It’s letting them know why we at Delta believe so strongly in the founding principles and inviting them to join us on the journey.” 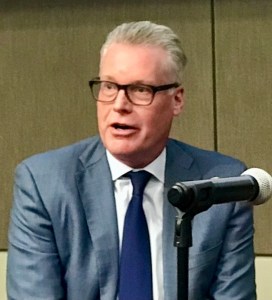 Delta CEO Ed Bastian speaks at the Sept. 21, 2021 meeting of the Kiwanis Club of Atlanta. (Photo by Maria Saporta.)

In the letter, Bastian explains that millions of new jobs being added to the U.S. economy require a four-year college degree. But 76 percent of Black talent over the age of 25 do not a college degree, which perpetuates a wealth gap in the country.

“As business leaders, it’s up to each of us to ensure we’re not leaving talent behind as we move forward,” Bastian’s letter stated. “And it starts right here in Atlanta.”

After the murder of George Floyd in 2020, Bastian spoke to several fellow CEOs who were concerned about inequities within their workplaces. It was Ken Frazier, then CEO of Merck, who outlined an idea on how “to change the outcomes for one million Black American families” in the next 10 years by creating opportunities for them to “have good paying, sustaining incomes” that would change the trajectory for future generations.

In addition to Frazier, Ginni Rometty of IBM and Ken Chenault of American Express were part of the founding coalition of about 20 companies that eventually became OneTen.

Delta is the only Atlanta company to partner with OneTen so far. But there are a number of other companies, based outside Atlanta, that have a notable presence in the Atlanta area that are a part of the important OneTen mission and work. 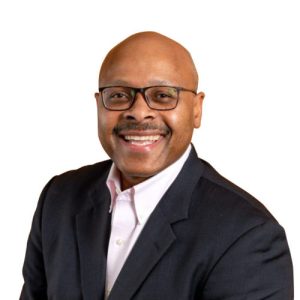 Bastian felt it was important for local executives to learn about the advantages of skill-based hiring rather than requiring education-based hiring,  OneTen provides a forum for companies to share how they have been able to implement changes within their workplaces.

Maurice Jones, CEO of OneTen, was a special guest at Delta’s Town Hall this past February. Bastian said he intends to bring Jones to a meeting of the Metro Atlanta Chamber so he can share the opportunities of OneTen.

“There’s a large section of our society that never had the opportunity to get that four-year degree,” Bastian said. They may have started on the journey and got waylaid for whatever reason. It’s particularly acute in the Black community.”

Since joining OneTen, Delta has “reshaped its hiring requirements” to eliminate possible obstacles to people finding a place within the airline. and has created sponsorship within an organization to help them develop the skills they need to do a great job.

Delta has pledged to diversify its workforce on all levels within the company. OneTen is one of many programs the company has implemented to encourage the hiring, training and promotion of Blacks, other minorities and women. 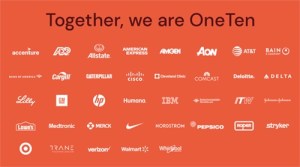 The airline publishes an annual report on its progress through its “Closing the Gap” report. Bastian said Delta has improved the percentages of frontline Black employees, the most challenging category has been increasing the percentage of Black officers among Delta’s top management ranks.

“But we’re growing the pipeline of directors and managing directors and general managers,” Bastian said. “There’s healthy growth in each of those sections over the last five years.”

Later he added that one category that impressed him the most was the increase of Delta’s female officers.

“Five years ago, 19 percent of our of our vice presidents and above [roughly about 100 people] were female,” Bastian said. “Today it’s 34 percent.”

As for OneTen, Bastian’s initial goal is to create more awareness. Then he hopes companies with large numbers of employees will “join us on the journey” to implement more flexible hiring practices.

In his letter, Bastian called on Atlanta companies to embrace the idea.

“As business leaders in Atlanta — the cradle of the modern civil rights movement — we have a responsibility to serve as a model for the nation and to address systemic inequities head on,” Bastian wrote. “That’s why I’m urging my Atlanta business colleagues to learn more about OneTen and join us on the journey to challenge the way we approach hiring and enable multiple pathways to jobs and careers.” 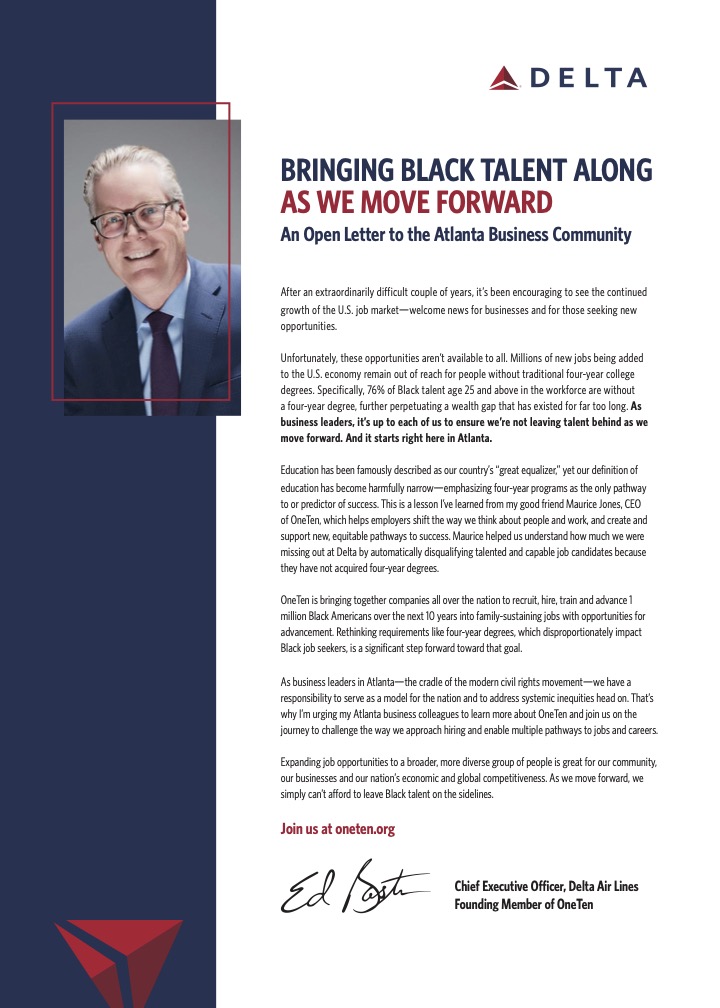