The Americans With Disabilities Act (ADA) was passed 30 years ago in an effort to equalize opportunities for people based on disability. The wide-ranging law covered areas from employment to transportation and public accommodations to access to state and local government programs.

Midtown Alliance recognizes that while some progress has been made on the ground, many of the tenets of the ADA still have not been realized. Part of our mission includes creating streets and sidewalks that work for everybody, and a district that is accessible for all.

This year, we’re enlisting the help of people whose experiences can help us improve the design of our transportation network. We started with Carden Wyckoff, an Atlanta native who has lived in Midtown since 2019 and rides MARTA frequently.

Wyckoff has facioscapulohumeral muscular dystrophy, a disorder that causes progressive muscle weakness, and she uses a motorized wheelchair to get from place to place.

“What brought me to Midtown was the central location,” Wyckoff said. “I found myself taking MARTA on the weekends after work, and I would frequent Piedmont Park and Ponce City Market.”

Wyckoff finds Midtown to be one of the more accessible parts of the city, but certain places still are difficult to get around because of legacy narrow sidewalks, utility boxes, sign posts and other clutter.

“You’ll find some issues closer to Piedmont Park, where there are more trees,” she said. “In between 13th and 14th Street on Piedmont Avenue there is an enormous tree, and it’s a trip hazard.”

Since the Midtown Improvement District was created in 2000, millions of dollars have been invested in public improvement projects and infrastructure projects including streetscapes and bridgescapes, traffic signals and parks and plazas. From November 2014 through August 2020, Midtown Alliance performed nearly $1.2 million in sidewalk “spot” repairs, including replacing concrete, building new curbs and ADA–compliant ramps. But in a rapidly densifying district with constant utility work, even maintaining the current state of the sidewalks can be a challenge.

“Improving accessibility in the public right-of-way has always been a big part of our work,” said Midtown Alliance Director of Transportation and Sustainability Dan Hourigan. “It can be difficult and expensive to meet ADA standards, but it’s imperative that we do so. We’ve made tremendous progress on accessibility, but there’s still more to be done.” 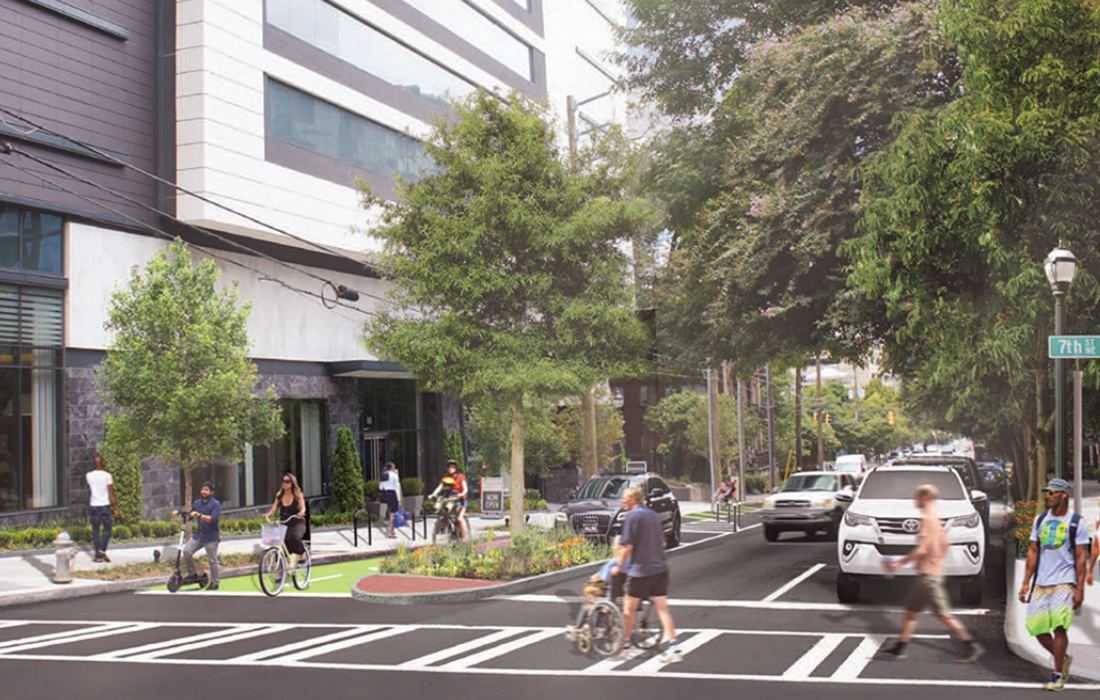 The nature of a growing urban district with lots of pedestrian and vehicle traffic inherently means Midtown’s streets and sidewalks are a work in progress. But Midtown Alliance is working with the City of Atlanta and private developers on a number of actionable projects that will help bring the district closer to realizing the goals set forth by the ADA 30 years ago.

The Piedmont and Juniper Complete Streets projects will both include wider sidewalks and pedestrian-scaled lighting. These projects also include building new ADA-compliant ramps.

And through the West Peachtree and Spring Quick-Build Projects, as part of Mayor Keisha Lance Bottoms Action Plan for Safer Streets are focused on LIT (light individual transport for bikes and e-scooters) lanes, Midtown Alliance has plans to improve accessibility along segments of each corridor after the Atlanta DOT delivers its projects.

Some of these projects, such as Juniper Street, have been a long time coming, but the ADA’s 30th anniversary highlights the need to move forward on them with our partners as soon as possible.

“The anniversary of the ADA legislation is an important reminder for us to strive to do more and to demand more,” Hourigan said. “It’s also a reminder that our circumstances can change at any time and we may be the one who needs these accommodations.”

Wyckoff describes the ADA as an “incredible piece of legislation” that has improved the lives of everyone, regardless of whether they have a disability. When she does see an accessibility issue, she advocates to get it fixed by contacting city leadership, posting about it on her social media accounts (follow her on Twitter @CardenOfMilk) and speaking up about it on her podcast, “Freewheelin’ with Carden.”

“We’re looking to create a more inclusive world, and we still face barriers. It really starts with using your voice,” she said.

If you identify an accessibility issue in Midtown, let us know by emailing us.