Behind the controversy over the possible demolition of the Star Community Bar is the mystery of what the overall plan actually involves.

The development team — Third & Urban and current Star Bar owner Point Center Partners — has presented several concepts to locals but won’t release its current version, saying it is still in flux. That complicates Star Bar preservation advocacy and is clouding some of the debate with apparent misconceptions.

Scott Fleming, an architect with the firm Cooper Carry who lives in Candler Park and patronizes the bar, spoke at a Sept. 18 community meeting there about a version of the plan he saw in a small, neighborhood-level meeting. He emphasized some misunderstood points, including that most of a surface parking lot would not be redeveloped, and that the plan called for apartments rising, not on the bar site in Little Five Points, but an adjacent Montessori school property in Candler Park. 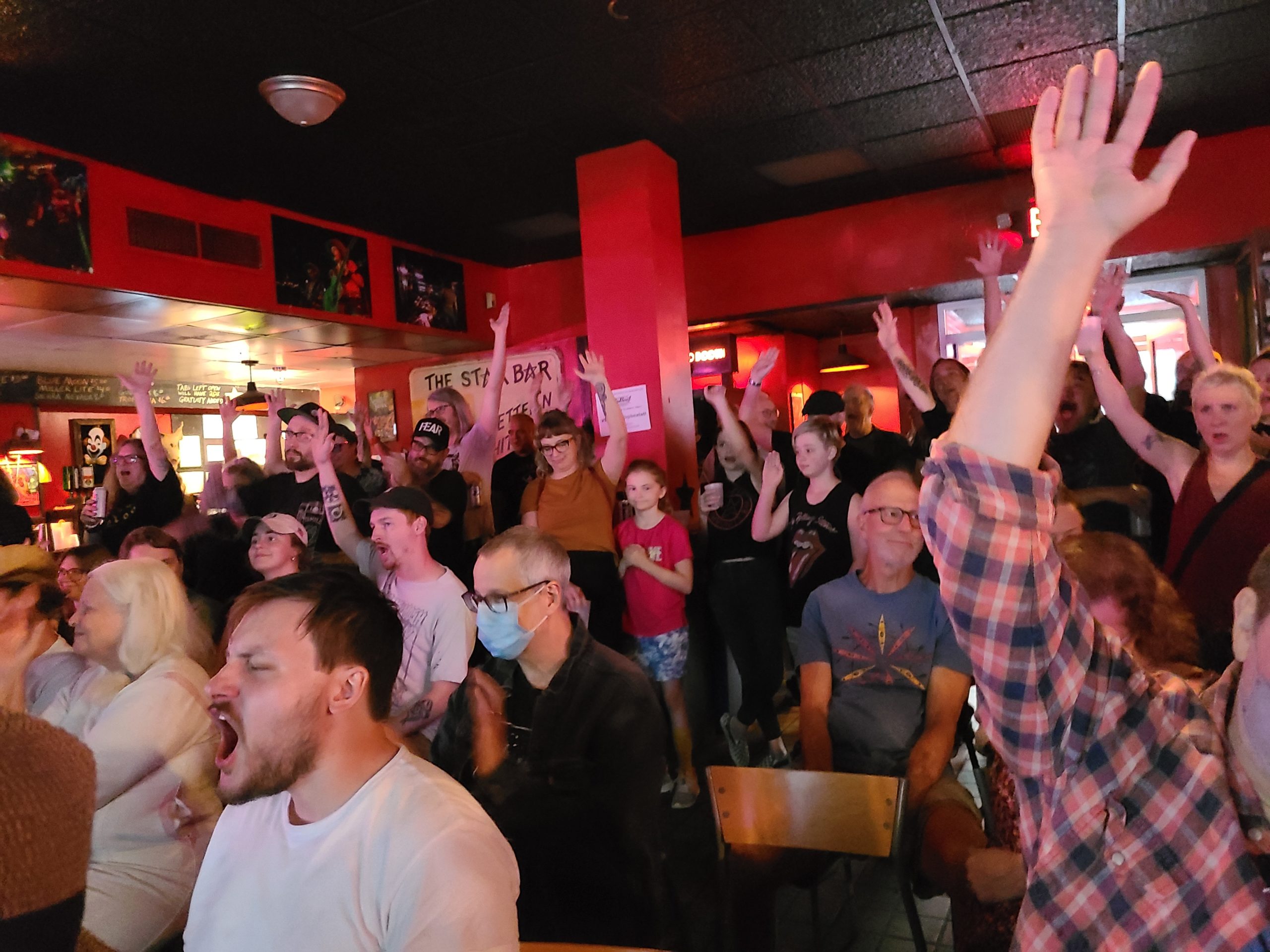 Attendees of a Sept. 18 meeting at the Star Bar call out their support. (Photo by John Ruch.)

“I would say that many of us support real efforts to improve the L5P community through smart, sensitive and strategic redevelopment. This is not it,” Fleming said after the meeting based on that understanding of the plan.

But the developers later said through a spokesperson that the plan presented at that meeting “is not even accurate to the development team’s current design iterations, which have changed based on community feedback, so it is pretty irrelevant to the conversation at this stage.” However, they would not say what that current plan is, calling it a “work in progress.”

They also would not comment on a delay in a rezoning process that started with them backing out of a Candler Park Neighborhood Organization (CPNO) meeting this month. Fleming said he understands the developers intend to return to CPNO no earlier than mid-January.

“We believe there is a way to bring new energy, an improved pedestrian experience and needed daytime activity to this site, while also preserving its history and culture,” the developers said. “We look forward to continuing the planning process and working with our tenants, the community and public officials to find the right path forward.”

Right now it appears the bar at 437 Moreland Ave. remains threatened with demolition, with an offer to build a new space for it still on the table. Bar co-owner Dusty Mumma said at that meeting that the lease runs to August 2023 and that the developers informally agreed to an extension through Oct. 31 of that year. Also not publicly revealed are the details of the bar’s lease, which former co-owner Jim Stacy indicated at the meeting has been below-market for some time.

One certainty, the developers say, is that the adjacent Point Center commercial building at Moreland and Euclid avenues will be preserved and all of its current tenants will remain. The team previously told SaportaReport that the redevelopment plan included that building, while the version Fleming saw did not.

Kelly Jordan restored the Point Center building, which dates to 1925, in the 1970s and placed a historic easement on it when he sold it in the early 1990s. The easement, held by a nonprofit called Easements Atlanta, prevents the demolition of its exterior. Because the easement reduced the value of the property for appraisal purposes, it made Jordan eligible for a tax deduction.

“I restored that building, loved it, still do love it, and when I made a decision to sell it so that I could go on to other things, I voluntarily put that preservation easement on it to protect it,” said Jordan, who today is also a SaportaReport contributor.

Less clear is the status of the International Montessori Academy, which occupies a 1950s-era former church at 1240 Euclid, though the site appears to still be where apartments are concentrated in the plan. The developers have said the school is moving to a new location on Briarcliff Road next year. The school did not respond to a comment request.

Clad in a Johnny Cash T-shirt and clutching a PBR, Fleming presented at the Star Bar meeting the version of the plan he had seen. It included 140 to 166 apartment units on the school site, which he contrasted with L5P’s existing Bass Lofts at 133 units. At that time, he said, the plan called for renovating the former church into lofts, but a later version reportedly demolished that building.

“I would speculate that the developer will continue to evolve their plan, but I don’t think they can feasibly build the apartments at this scale without taking down the church,” Fleming later said.

Fleming also said the school property was rezoned for multifamily use in 2008 for a redevelopment that never happened. At the time of the presentation he saw, the current developers were proposing another rezoning for an even higher density that he likened to conditions in Midtown.

Fleming noted that the plan at that time did not build anything on most of the existing surface parking lot at Point Center and Star Bar, except for a small area behind the bar. 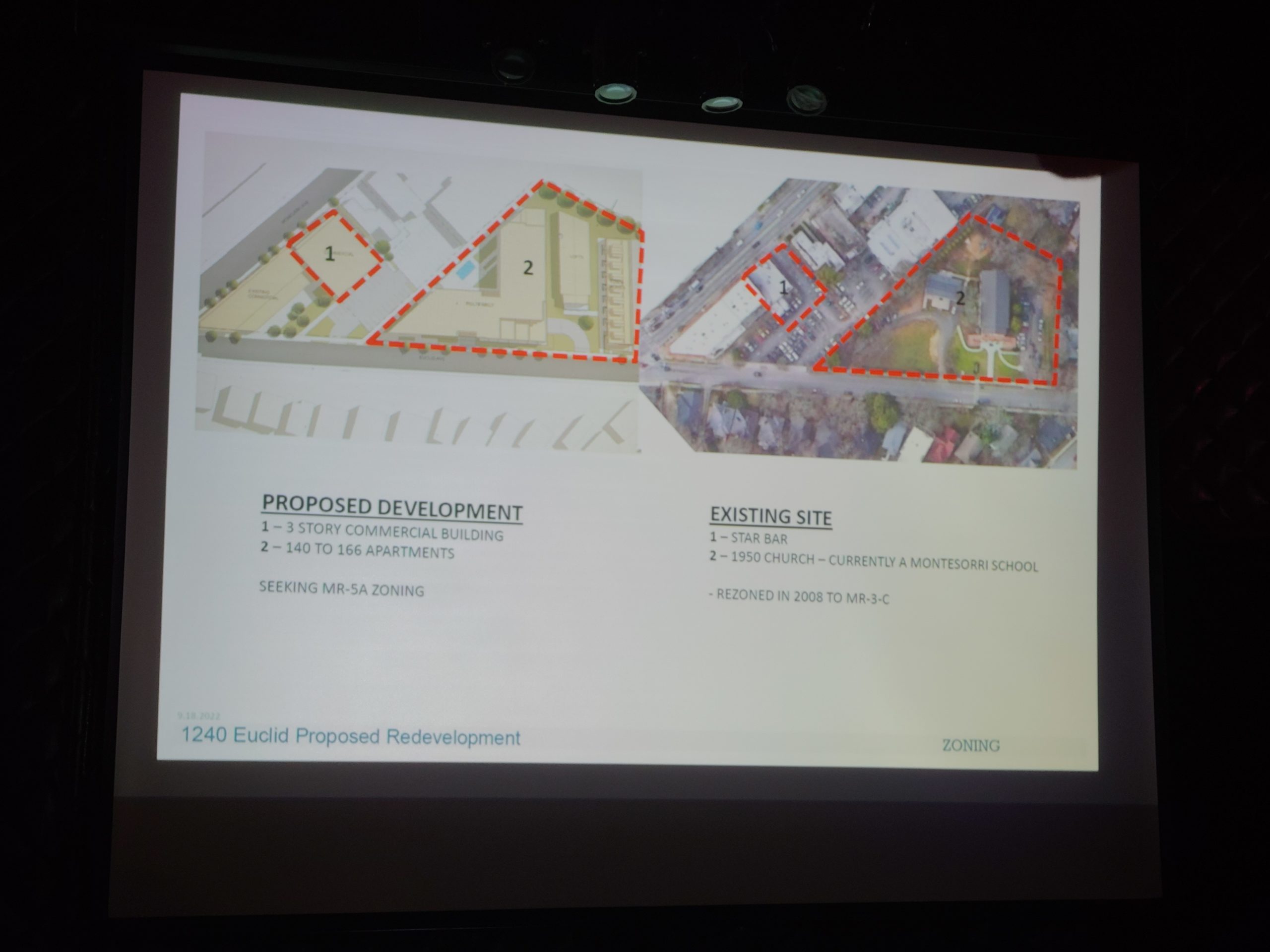 A preliminary redevelopment plan for the Star Bar and Montessori school sites as shown by bar-saving advocate and architect Scott Fleming at a Sept. 18 community meeting. The developers say the plan is outdated and would not reveal the current version. (Photo by John Ruch.)

As for the bar itself, the last plan described by the developers involved demolishing its historic building and replacing it with a three-story commercial and office building with ground-floor restaurants. The bar is being offered a new custom space in a basement facing the parking lot where its Little Vinyl Lounge space is today. “It [would] be, believe it or not, a bigger music venue,” Mumma said at the meeting, describing it as extending all the way from the parking lot to Moreland.

But Fleming and other attendees noted the difficulty of such a business surviving a lengthy construction closure, reviving in a different space, and other challenges.

Laura Dobson, a Buckhead preservationist who led a successful campaign to save part of a historic bookstore and bookbinding building in a condo plan in that neighborhood, attended the Star Bar meeting. She suggested seeking historic easements or landmarking for the bar building, which would prevent demolition and could provide tax deductions, grant eligibility and other benefits.

“Saving the building does not save the Star Bar,” said Mumma, noting such other challenges as rent in a refurbished structure. Dobson said after the meeting that while saving the building would not necessarily save the business, it sounds like it would increase the odds, especially compared to the alternative’s concerns.

The bar’s four-member ownership team is not fighting the plan directly, focusing on negotiations, but has encouraged others to be involved. However, there are some different degrees in their takes. Mumma urged the crowd to keep up the pressure that has given the bar leverage. Chris Jackson, another co-owner, has expressed doubts about overcoming the challenges and said that if it comes to a lingering death, he’d prefer the bar have a great final year and “go out with our heads held high.”

Attendees at the packed meeting expressed outrage about the plan. While the fate of the bar and L5P’s counterculture dominated, it was clear that the apartment aspect also will be controversial for the largely single-family neighborhood of Candler Park surrounding it. 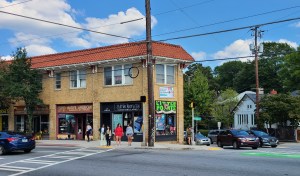 The Point Center building at Moreland and Euclid avenues will remain, as will its tenants, according to the developers. The building is protected from demolition by a historic easement. (Photo by John Ruch.)

Some attendees mocked the developers’ prior claim of building “attainable” — rather than affordable — housing and “micro units.” Others noted the number of nearly vacant, old-school strip centers farther south on Moreland as more suitable for redevelopment.

Fleming, who favors more affordable ownership housing and lower density in the plan, agreed with those takes.

“We have plenty of parking lots and troubled buildings in L5P that would benefit from this development [and] that doesn’t rob L5P and Atlanta of one of its cultural icons,” he later said.

One commenter said “this is gonna be like dominoes” and spell the end of L5P and other bohemian communities remade like Ponce City Market. “They think this [bar] is nothing but counterculture and scum,” said another.

“They’re not just a rock and roll bar. They’re a community anchor,” said another attendee, noting the large number of fundraiser shows hosted there.

Sparked by an attendee’s suggestion, Fleming said advocates on social media should use the hashtag “#SaveTheStarBar.” An anonymous sign taped to the bar’s front wall the night of the meeting more bluntly said: “Save Star Bar from money-grubbing developers.”

While encouraging advocacy, Mumma also said fans should keep themselves in check. The developers, he said, had received some death threats. “That’s not cool,” he said. “That’s not us.”

“It’s only by us freaks looking rational that we’re gonna make this work,” said Stacy, the former co-owner of the bar.

But exactly what they will advocate for is unclear with the plan’s details still mysterious, the bar owners engaged in private negotiations, the process timing unknown, and no specific survival strategy chosen. Fleming had a sign-up sheet to keep the scores of supporters in the loop about any next steps in advocacy.