Few executives in Atlanta can rival the multi-cultural experiences that Dimitris Psillakis has enjoyed.

It’s been a little more than a year since Psillakis became president and CEO of Mercedes-Benz USA, which moved its headquarters to Atlanta in July 2015 from Montvale, N.J.

Mercedes-Benz has become an integral part of Atlanta since moving its headquarters to Georgia. By acquiring the naming rights to the Mercedes-Benz Stadium, the company now has one of the biggest corporate signs in the region. 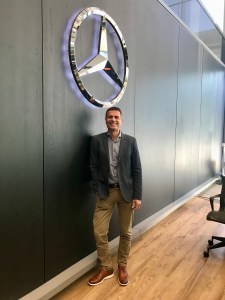 Needless to say, Mercedes-Benz has become part of the Atlanta region’s landscape — something Psillakis looks forward to continuing and strengthening.

“It was a very easy decision to come to Atlanta,” Psillakis said during a recent interview at the company’s Sandy Springs headquarters. “It’s a big job. The United States is our second biggest market.”

Before Korea, Psillakis was with Mercedes-Benz do Brasil Ltda, where he served as managing director for passenger cars in South America and Vans Sales Brazil. In his six years in Brazil, his team tripled the sales volume to reach the highest market share in the country.

Psillakis was born in Athens, Greece, where he spent 12 years in a French school

“I decided to go to England when I was 15 years old to go to a British university,” Psillakis said. “I learned English on the fly.”

Interestingly enough, Psillakis acknowledged that one language he has not fully learned is German. However, that hasn’t seemed to be a hindrance in his career with Daimler AG, the owner of Mercedes-Benz, which is based in Stuttgart, Germany.

Now Psillakis is focused on Atlanta.

“Our footprint in Atlanta has become much stronger and much bigger,” said Psillakis, adding that getting the naming rights to the Mercedes-Benz Stadium five years ago helped “convey the message and helped us to enhance our presence in the market with our products.

Of the more than 1,600 people who work for Mercedes-Benz USA, between 800 and 900 are based out of the Sandy Springs headquarters.

“Five years back, we were competing for the number one position,” Psillakis said of Mercedes-Benz rivalry with luxury automaker BMW. “The goal now is to be number one in customer experience. We don’t want volume to sacrifice brand.”

A shortage of semi-conductors has hindered the production and delivery of cars, which has impacted the company’s sales. Still, Psillakis said Mercedes and BMW alternate in which automaker has the largest market share in the United States.

Up until now, Mercedes-Benz has not been recognized for producing hybrid or electric cars. Now it is pivoting to become a carbon-neutral company by 2039.

Last year, the company unveiled its first fully-electric car in the United States — the Mercedes EQ. It is featured prominently on the ground floor of the Mercedes-Benz headquarters, which looks more like a car dealership than a corporate office. 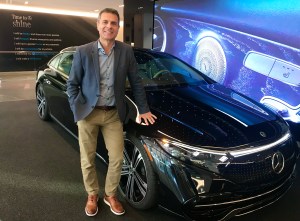 Dimitris Psillakis stands next to Mercedes-Benz EQ-S, the first all-electric car the company is selling in the United States. (Photo by Maria Saporta.)

In the near future, Mercedes-Benz expects to have five different all-electric vehicles — SUVs and two sedans — a move that will reinforce the company’s commitment to the environment.

When looking at the company’s civic initiatives, Psillakis mentioned education, technology and the environment, including pedestrian and passenger safety.

“For me, my priority is to rebuild our culture,” Psillakis said. “We’ve had a lot of changes. I want to bring stability to the team. I want to be sure the company has a north star and a strategy of how to get there.”

Unfortunately, the COVID pandemic has meant that most of Psillakis’ meetings with his colleagues in the past year have been virtual rather than in person.

“That’s a disadvantage,” said Psillakis, who said the challenge is to continue innovating a brand that is 135 years old. The company is focused on bringing in young talent and better aligning existing talent with their skills. He expects that his tenure in Atlanta will be between three to five years.

Meanwhile, he and his wife, Maura, are enjoying being in Atlanta. They live in the LaVista Park neighborhood in Brookhaven.

“For me, it’s impressive to have so much greenery,” Psillakis said. “You don’t have the feeling of living in a city. Atlanta has nice neighborhoods and restaurants. It’s a good life.” 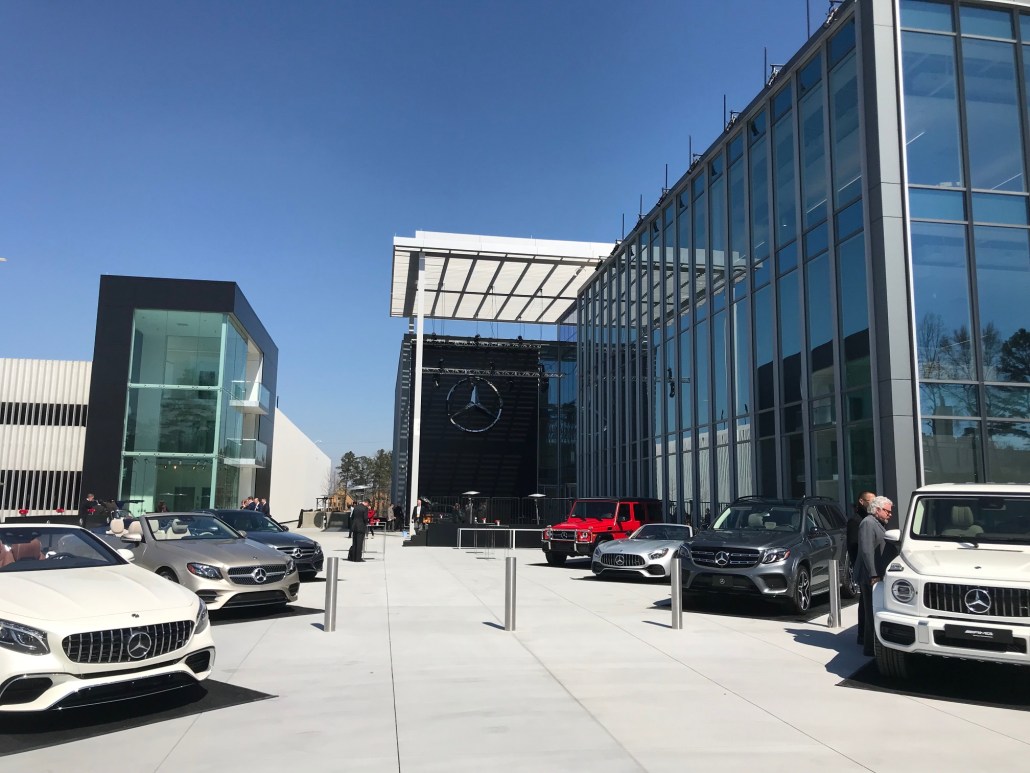