A photo of water allegedly polluted with dirt running off of the Rivian plant site into the Rawlings Branch stream on Oct. 13, 2022. (Photo by Morgan Land, Sky & Water Preservation.)

The state is investigating reports of dirt blowing and flowing off the site of the Rivian electric vehicle plant in Morgan and Walton counties, a situation critics say confirms their fears about environmental issues associated with the controversial and troubled project. 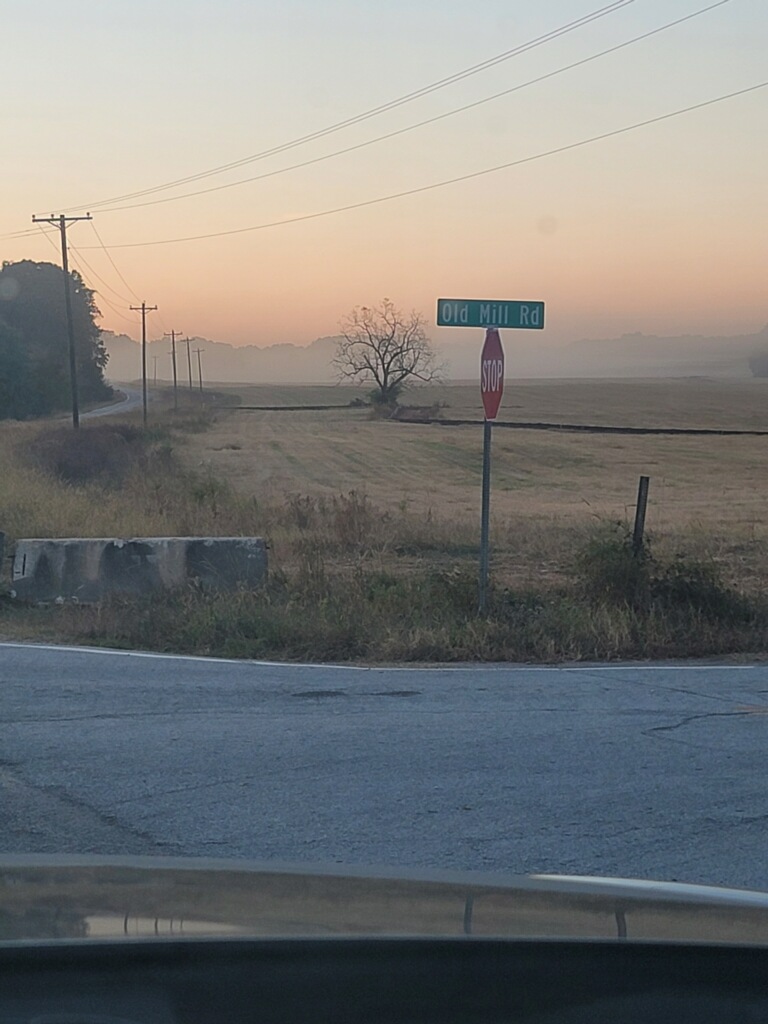 A haze of dust allegedly caused by dirt blowing off the Rivian plant site on Oct. 6, 2022. (Photo by Morgan Land, Sky & Water Preservation.)

Before the complaints were filed in recent weeks, some critics expressed concern that the state and a local development authority had hired a grading contractor, Plateau Excavation, that is among the defendants in a federal lawsuit alleging that dirt from a neighboring Facebook data center project polluted a local stream and ponds. The bigger picture is site preparation speeding ahead on a project whose $15 billion bond deal and hundreds of millions of dollars in tax breaks were just shot down in court and still lacks all of the permits for work near wetlands and waterways.

“I have tremendous concern about land disturbance work being performed at this time,” said JoEllen Artz, a leader of Morgan Land, Sky & Water Preservation’s “No to Rivian” campaign. In the wake of her group’s legal victory on the bonds and tax breaks, she asked, “Will Rivian actually build on this site? …[Or] will we be left with a 500-acre, muddy, Georgia red clay pad that becomes a source of runoff and silt to the many streams, ponds and spring heads on the property?”

The co-developers on Rivian’s behalf are the Georgia Department of Economic Development (GDEcD) and the Joint Development Authority of Jasper, Morgan, Newton and Walton Counties (JDA). In a joint written statement, they did not explain exactly why they are proceeding with site clearing despite the bond and permitting status, only that they are legally and physically able to do so.

The latest environmental incident — an Oct. 13 runoff of dirt or clay from the site into the Rawlings Branch stream — was also self-reported by Plateau, according to the statement.

“The JDA and Plateau will continue following all regulations on this project while deploying best practices and taking precautions to minimize environmental impacts,” the statement said.

The Georgia Environmental Protection Division (EPD) was investigating the dirt complaints that included an on-site visit on Oct. 17, according to spokesperson Sara Lips. “We have staff at the Rivian site today to investigate and determine what corrective actions are necessary,” she said that day.

A main point of contention is the industrialization of a rural area about 40 miles east of Atlanta at I-20 and U.S. 278 near Rutledge and Social Circle. Outrage over the lack of public input intensified when the state took over the project to speed permitting — and to avoid local zoning and other reviews as Morgan County planners sought to subject the project to standards “above and beyond” the usual due to its scale — as the Morgan County Citizen reported. The plant even became an issue in the Republican gubernatorial primary, with unsuccessful Kemp challenger David Perdue siding with the local opposition.

Last month, Artz’s opposition group scored a major victory with a court ruling that the deal for tax-exempt bonds was unwarranted for an unproven startup company and that the proposed property tax breaks were unlawful. GDEcD and the JDA are considering an appeal. Rivian, which specializes in electric trucks, also had an overall rocky year, with production struggles and an announcement of more than 800 layoffs.

Just days before the court decision, GDEcD and the JDA began site clearance, following through on an April announcement that such work would begin on an initial 500 acres by avoiding wetlands and waterways while awaiting permitting under the federal Clean Water Act and state statutes. Plateau, their contractor, was selected by the JDA in August, about eight weeks after that company was among the defendants sued by two residents for alleged Clean Water Act violations and other actions.

Big as it is, the Rivian site is just part of a sprawling industrial park conceptualized by the JDA called Stanton Springs that already includes facilities for the biopharmaceutical company Takeda and the Facebook data centers. (The Rivian site is known internally as Stanton Springs North.) The billion-dollar data centers project, within a Newton County section of the industrial park, began in 2018 and expanded in 2020. Site clearance for that project produced local complaints of “dust storms” of dirt blown off the area and culminated in the lawsuit. 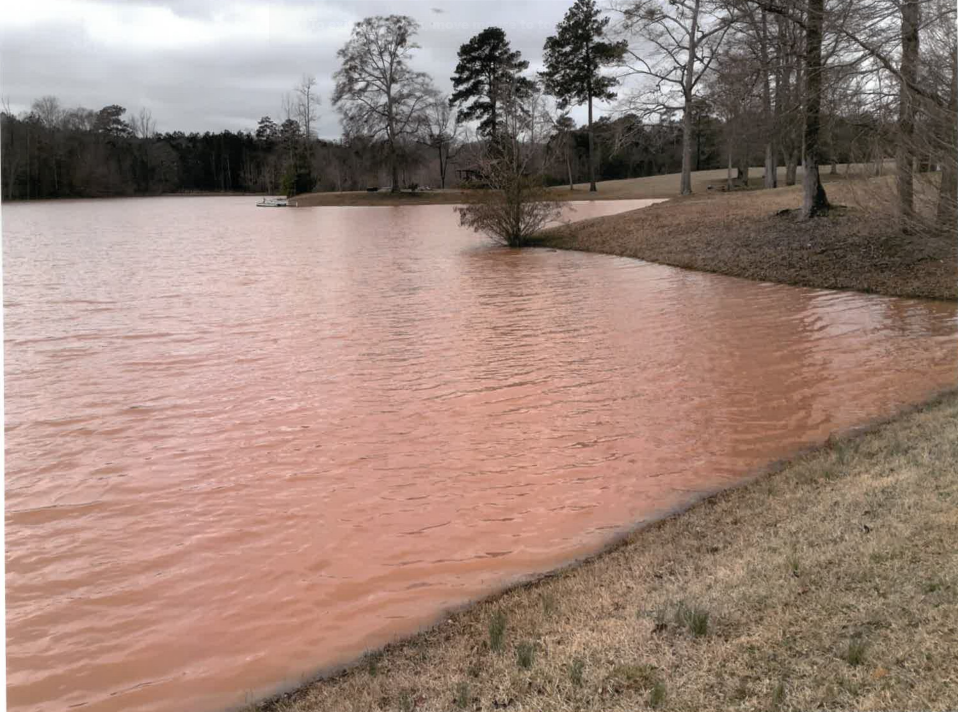 A pond alleged polluted with red clay dumped from the Facebook data centers as shown as an exhibit in a federal lawsuit.

The complaint alleges that starting in May or June of 2020, Alif “dumped hundreds and perhaps in excess of one thousand dump truck loads of red clay waste” taken from the data center’s site onto Bruce’s property, with his permission. The dumping was done without permits or proper erosion controls, and a Morgan County official was told by Alif it would only involve topsoil, the complaint claims. As a result, the complaint claims, red clay flowed off the site into the Rawlings Branch, polluting it and two large ponds owned by Jenkins and Gunn. The defendants did not respond to official notices of the problem sent earlier this year and the pollution continues, the complaint claims.

The lawsuit claims negligence, trespass, creation of a nuisance and violations of the Clean Water Act and other statutes, and seeks damages and remediation.

Meta, Holder, Plateau and Bruce filed answers – formal responses to the lawsuit – that broadly claim there is no pollution and that they are not responsible for it if it does exist. Alif, AM Grading and Mohamed did not file answers by a deadline, according to court records, which could open them to a default judgment in the plaintiffs’ favor. However, the plaintiffs have not yet requested that from a judge, according to Gunn’s attorney, Raymond Brooks Jr. A man who answered a cell phone number for Alif and indicated he is Mohamed referred questions to an attorney who could not immediately be reached for comment.

In early October, Rev. Alan Jenkins, the son of Julie Jenkins, circulated a press release about Plateau’s work on the Rivian site while the lawsuit was pending. “If the JDA and Plateau move forward with grading on the proposed Rivian site, there is a significant risk that similar erosion, sedimentation, and water pollution problems could occur,” he wrote.

The Jenkins family is among the critics of the Rivian project. They also sold about 40 acres of land to the JDA for the plant for nearly $2.8 million, though they say they did so only because the authority threatened that the Georgia Department of Transportation would take it by eminent domain anyway, a claim bolstered by an email discussion with officials, according to the Citizen. Alan Jenkins told SaportaReport that his mother is aware of his press release but is not commenting on it.

His emphasis on Plateau’s involvement drew the attention of other Rivian critics. Artz says she mentioned it in her comments to EPD opposing a variation GDEcD and the JDA are seeking from a stream buffer rule related to erosion and sedimentation control. “… I did not trust that they would perform any better on the Rivian site,” Artz said.

Artz and Alan Jenkins said those concerns have come to life with recent incidents. “We have also reported the grading several times to the EPD because Plateau was not watering the dirt in order to keep dust and dirt under control,” Artz said. “They have responded with water trucks but the trucks seemed to be used sporadically.” She also alleged the site has a dirt dump with no silt fencing and provided an aerial photo she says illustrates it. 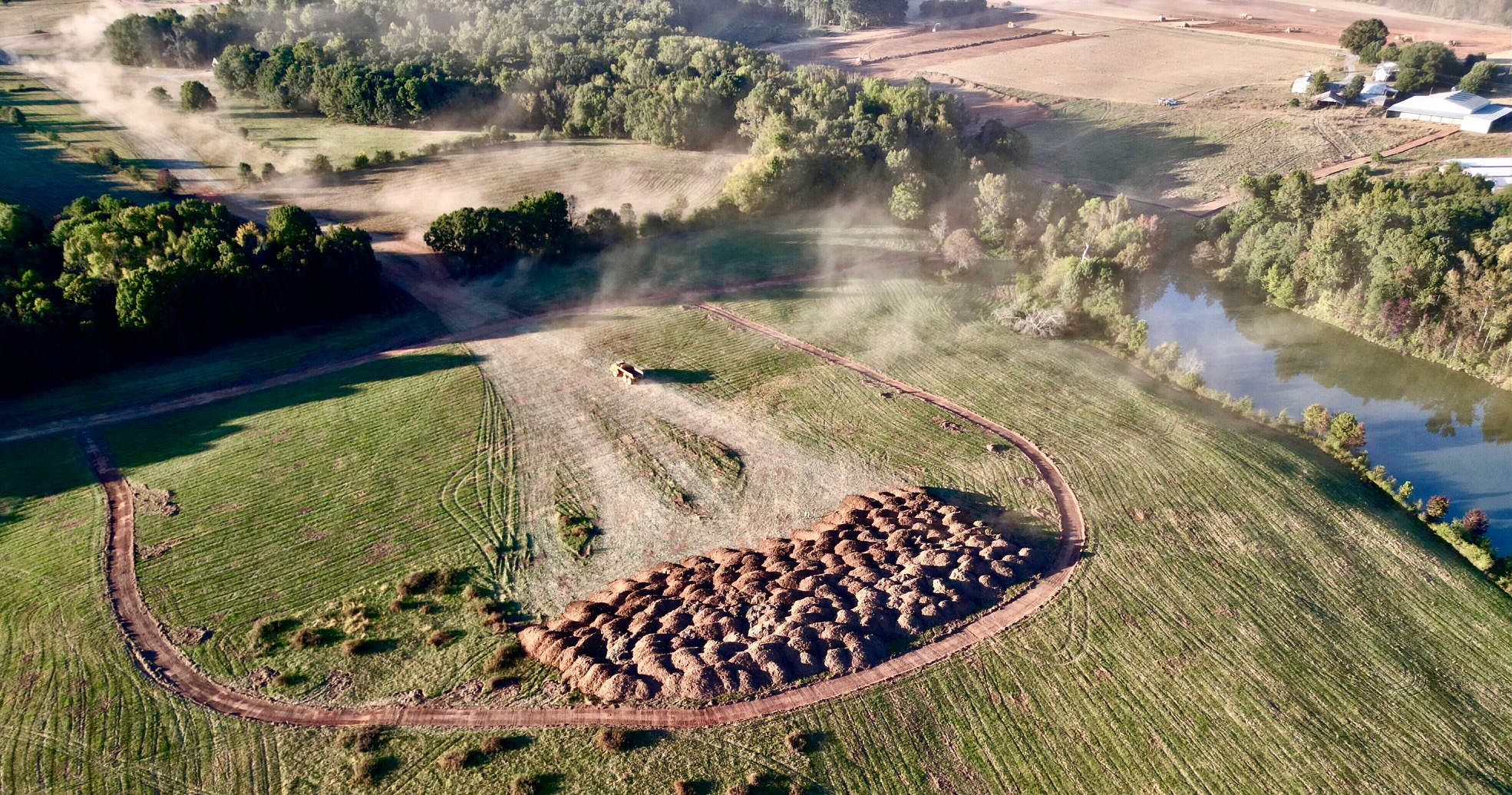 An alleged dirt dump on the Rivian site as photographed by Morgan Land, Sky & Water Preservation.

EPD confirmed receiving those complaints and said they are still under investigation.

Then there was the Oct. 13 runoff into the Rawlings Branch, the same stream involved in the lawsuit. Artz said that Rivian runoff resulted in the stream “teeming with muddy red water.” Alan Jenkins said the dirt did not reach the ponds, which he believes is due to upstream beaver dams that could be overwhelmed by larger rains.

Asked about the selection of Plateau, GDEcD and the JDA did not clarify whether they were aware of the lawsuit, which was publicized months before the contract approval. “Based on the requirements for this project, Plateau provided the strongest proposal at the lowest cost,” they said. “They are a reputable contractor with a strong track record. They have also committed to considering local subcontractors for work on this project, which is an important priority.”

GDEcD and the JDA said that in the case of Rivian, there is no off-site dumping. “All materials are contained on the site,” they said.

GDEcD and the JDA did not address the dust complaints, but said the runoff incident was “immediately self-reported” by Plateau and that, “Remediation efforts were implemented immediately.” They blamed the runoff on “a period of drought-like conditions followed by persistent rainfall.” According to the website Weather Underground, rainfall in the preceding 24 hours as measured at Hartsfield-Jackson Atlanta International Airport was 1.11 inches, but local amounts may have differed.

“While best practices were in place to prevent this from happening, the rainfall was significant enough to overwhelm the double-row silt fence that was installed,” said GDEcD and the JDA.

Officials with Morgan and Walton counties – the latter of which reportedly is in charge of local-level environmental monitoring on the project – did not respond to questions.

Rivian touts itself as a green-focused company, even as it aims to build on the rural site atop a local groundwater source. The GDEcD and JDA have said the project will have minimized but some unavoidable impacts on wetlands and waterways as it seeks, among other approvals, a federal Clean Water Act Section 404 permit. In an April press release announcing the Section 404 application, they noted the plant plan has such features as leaving more than half the site unpaved and collecting rainwater for reuse on-site. Officials have said the finished plant would have less runoff in total than the current site due to stormwater infrastructure.

“As they build their Georgia home, Rivian’s corporate ethos prioritizes the natural environment in every aspect of their planning process,” said GDEcD Commissioner Pat Wilson in that press release. “The State and JDA continue to work closely with this American startup company to thoughtfully develop Rivian’s state-of-the-art, environmentally conscious manufacturing site at Stanton Springs North. The stream and wetland permitting and site grading processes will show that the State is following through on our commitments to follow established codes for site grading and protect local groundwater quality.”

In the wake of the dirt complaints and the court decision putting bonds and tax breaks into uncertainty, Artz has her doubts about all of that.

“I certainly don’t think anybody at the JDA particularly cares about these issues and I do not believe the Walton County person in charge of monitoring the site has enough authority to influence what is done because of downward pressure from Walton County management and the JDA,” she said.

Artz said many opponents believe the site grading “is probably being done in a snit of vindictiveness… [T]he project should have been postponed until all permits and funding were received, if that were to happen.”