Of dogs, loyalty and Chipper Jones

Diezel is 9, which in dog years is 63, but the Boston terrier didn’t look or act his age Sunday night at Turner Field.

Diezel is a 9-year-old Boston terrier who attended the Sept. 16 Bark in the Park event at Turner Field and watched the Atlanta Braves beat the Washington Nationals, 5-1.

He was rocking a red and blue fur mohawk on the jumbo screen during the divine canine evening known as Bark in the Park. The Braves invite fans to bring their dogs to the nosebleed seats and some serious chops to all the chopping.

At this point in this season, this night was about loyalty – pure and bittersweet. This month will mark the farewell of third baseman Chipper Jones, about to retire from a Braves career that began with the 1990 amateur draft.

The 40-year-old Jones was at bat, with runners at first and third base, when Diezel’s owner paused to reflect on what longevity means to her.

“It scares me to think about him not being around,” said Abby Vaillancourt, who wasn’t talking about Jones (but could have been); the subject was Diezel who, as the runt of the litter back in 2003, fit into the palm of her hand. “The time has really flown.” 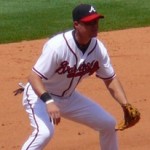 Chipper Jones, 40, will retire after this season. He has spent his entire pro baseball career with the Atlanta Braves, who drafted him in 1990.

As she spoke, Jones drilled a single to center field (the 2719th hit of his career, two shy of tying Lou Gehrig) and put the Braves’ first run on the board (for his 1620thRBI).

Chipper is that blue-moon pro athlete who performs so well for so long in the same place. Our dogs don’t stay with us very long, either.

Through that fleeting window, what more shines through for us?

“Communication,” said Vaillancourt, who with her family watched Jones and the Braves go from worst to first in old Atlanta-Fulton County Stadium. “In the beginning, Diezel would take and shake a toy and growl, and I would scold him. I learned later that this was just him being playful. It’s intriguing to me that animals are like people, they all have different ways to communicate.” 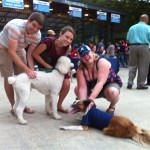 Sara Edwards (right) with her brother Mark (left) and their dogs Ray and Parker.

Growing up in Maryland, they had great dogs for pets. As baseball fans, they had Orioles iron man Cal Ripken, who broke Gehrig’s record for consecutive major league games played and stopped after 17 years with 2,632 games.

That’s what Sara Edwards admires about Chipper, too: “Playing for one team forever,” she said.

But forever doesn’t apply to what is beloved. “I believe they come into our lives for a reason,” she agreed. Parker got his name because he was found in a park, and she rescued him from the Fayette County pound, showing yet again how dogs and baseball both value the “save.”

Mark Husack marked an adult passage when he adopted a blue-eyed husky mix and named her “Mischa.” Animal control was calling her Apple Pie, which fits in with the baseball theme, but 24-year-olds who live near Little Five Points don’t walk around with dogs named after an American dessert. 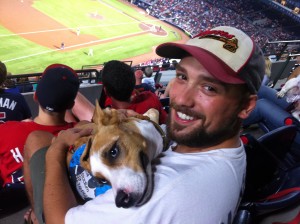 “I got her last November after baseball season,” he said, marking his life by the passages of this sport and his pets and what he has learned about sacrifice and preparation.

“I had a dog growing up, and always said I wanted to have one on my own after my family’s beagle passed away when I was in college five years ago. I was finally at a point where I could support a dog financially, because they aren’t cheap by any means, and they take a lot of time and work.”

Amid a parade of Great Danes, German shepherds, schnauzers, pit bulls, boxers, weimaraners, Dalmatians, at least one St. Bernard and a ton of mutts, the Braves organist tapped out the theme from Scooby-Doo and “How Much is that Doggie in the Window?” On the kiss-cam, owners smooched their drooly dogs and fed them (what else?) hot dogs.

The National Anthem was punctuated with barks and whimpers. The souvenir shops sold dog-sized baseball shirts and collars with the “A” logo, and the Taj Ma Hound bakery offered jersey-shaped dog biscuits iced with Chipper Jones’ #10.

In this crossroads, some owners made surprising connections. No athlete, and no pet, survives without assistance – especially the longer they’re around. 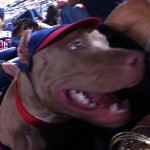 “My great-uncle did a surgery on Chipper right after he started in pro baseball, and I met him right after that – when I was about 5 years old,” said Philip Hill of Alpharetta, manhandling his giant and sweet pit bull Juice, aged 2.

Nearby sat Juice’s daughter Sug (as in sugar), aged 6 months, with a small Braves cap that made her tough face look merry.

“You don’t have complete control over their health,” said Hill, who breeds pit bulls. “But you can make their lives as healthy as possible. I feed them a completely raw diet, and give them a lot of exercise.

“They’ve taught me to just enjoy life,” he added. “No matter how mad you might get about something, they are always there to support you, and that’s the way it should be in life.” 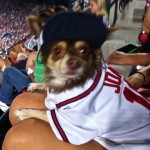 At 9 pounds, Cooper the long-haired chihuahua sported a Chipper Jones jersey designed for an infant.

The purest answer of what a dog can teach about loyalty and life came from Ally Valdez, who at 21 was born the year Jones was drafted. Every one of her memories of the Braves include Chipper.

In her lap calmly sat Cooper, her long-haired chihuahua gussied up for the occasion in a baby-sized No. 10 jersey — nine pounds of a breed that she understands lives longer than most, and she’s maxed out that time so far as Cooper’s only owner.

What has she learned about life from her pup?

She paused then replied with two words: