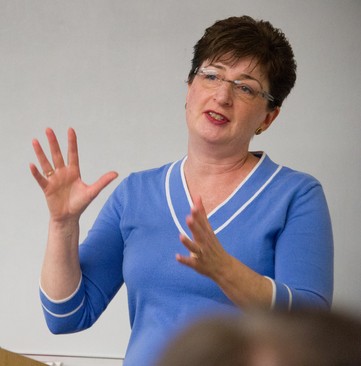 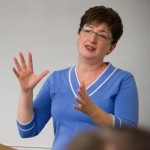 The beheading of James Foley troubled Dorie L. Griggs of Roswell on a level that most of us cannot relate to. For the last 12 years she has followed an unpaid calling as a chaplain to journalists, especially those in combat zones.

It would be hard to find anyone in metro Atlanta who understands and supports the news gatherers who rush to danger without the benefit of trauma training. And sometimes don’t come back.

“We take for granted—and no one really gives a second thought to—a person who intentionally went to a place hit by a tsunami or stricken by war,” Griggs, 54, a 2002 master of divinity graduate from Columbia Theological Seminary with a concentration in pastoral care, said late last week. “I want to bring that to a more conscious level.”

Hundreds of names are on her online list of journalists in Iraq and the Middle East, which she began compiling after 9/11. It’s not exactly a prayer list, and her chaplaincy is broader than Christianity. She is available to listen to media people who contact her via email and phone. Some are in isolated regions of the world; others are local.

Recently she connected the editor of a small newspaper with coping resources for his staff. They had to cover the trial of the man accused of murdering one of their colleagues.

“It’s less about religion than it is a ministry of presence and caring for a profession not known for warm fuzzies,” she said. “It’s about helping them find where they find hope.”

Getting the news under fire 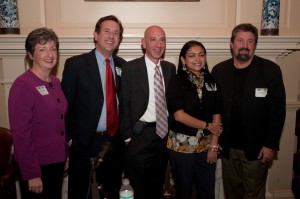 As a chaplain to journalists, Dorie Griggs (left) offers resources to help news gatherers cope with trauma. In 2009 she helped the Atlanta Press Club organize a showing of the award winning documentary “Breaking News, Breaking Down,” about John McCusker, a photojournalist with the New Orleans Times-Picayune, who encounters life-changing trauma. With Griggs from left is Mike Walter, former WUSA-TV news anchor; McCusker; Moni Basu, writer/editor at CNN Wire and Dart Center Fellow; and Mark Biello, senior photojournalist at CNN.

According to the Committee to Protect Journalists, 1072 journalists have been killed since 1992; of those, 32 died this year. Others are imprisoned, exiled or missing. The committee’s website points out that their work is important because “without a free press, few other human rights are attainable.”

Foley’s story illuminates some of the dangers. In 2011, he had been captured in Libya and held for six weeks. A photographer with him was killed. He was involved with Reporters Instructed in Saving Colleagues (RISC), set up by Sebastian Junger after a photographer bled to death in Libya.

A more pervasive threat is trauma, because journalists witness so many brutal scenes—think of how many editors had to watch the Foley video and decide whether to publish, or how many media people covered the violence in Ferguson, Mo. There’s no unseeing it.

One resource is a network of peers, mental health experts, educators and research assembled by the Dart Center for Journalism and Trauma. Griggs is part of this network, and her work is sometimes local. While volunteering in the press box at the Chick-fil-A Bowl on New Year’s Eve, she helped others deal with the sudden death of Associated Press photographer Dave Martin, who collapsed of a heart attack on the field after the game.

She became aware of this need in college at University of Richmond. Working in the press box as a sports information director, she got to know photographers and videographers who covered crime scenes. She discovered that theirs was one of the most dangerous professions, because their equipment often makes them a target. Her husband, Stanley Leary, was part of a support group called Christians in Photojournalism.

As she considered possible career tracks while in seminary, her mind kept going back to this need and her desire to have a ‘quiet ministry’ of helping others. When the war on terrorism sent an unprecedented number of embedded journalists to the Middle East, she started her website list and reaching out.

“I would read a story from there, and send an email to the reporter with ‘Thank you’ in the subject line, because I knew it was hard to see what they had to witness to get the story,” she recalled. “The response back was usually ‘no one has ever thanked me before.’”

Her list grew to include names in other languages, from Al Jazeera and other international news outlets. She would meditate on the names daily, remembering their families and friends, praying for their safety.

Some did not come home, such as former Atlantan Danny Pearl, the Wall Street Journal bureau chief beheaded in 2002 in Pakistan. And last week, Foley.

“You can just feel the collective pain and sadness and extreme sense of loss of someone who is so good at what he did,” she said of Foley. “His death was so horrific that you could tell there is a collective numbness of his friends in journalism.

“Journalists don’t use the language that ministers do, but they have a sense of calling. They have a high level of dedication, that ‘this is what I am good at and what I am supposed to do.’”

Some returned with harrowing memories. Griggs met and became friends with one reporter she had prayed for quite a bit: Jill Carroll of the Christian Science Monitor, who was kidnapped in Iraq in 2006. 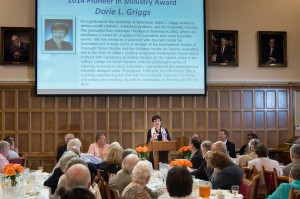 For her work supporting journalists, Griggs received the 2014 Columbia Theological Seminary Pioneering Ministry Award. She is a 2002 graduate of the seminary, located in Decatur.

Reaching out changed her

This spring, Columbia Theological Seminary recognized the unique value of her work with the 2014 Pioneer in Ministry Award. Today, Griggs persists amid declining public opinion of journalists.

A 2013 Pew Research Center study found that only 28 percent of Americans believe journalists contribute “a lot” to society’s well being. That’s a 10 point drop from four years earlier.

I asked Griggs, a mother of three whose day job is as a resident in a hospital chaplaincy program, how her work with journalists has changed her. She responded with a note in reflection, alluding to the broader difficulty we all face of connecting and help others across barriers of profession or belief.

“I believe ultimately it is far more important to remain in dialogue with all people instead of looking for why or how we are different,” she said. “That is why classic chaplaincy is so attractive to me. I truly feel called to a ministry of presence for people of all faiths or no faith at all. It isn’t about religion, but about love.”