For nearly 40 years, Doug Allen played a pivotal role in Georgia Tech’s College of Architecture – a trained landscape architect who joined the faculty in 1977 – later becoming a key member of the administration.

Allen, born in 1947 at Emory University Hospital, died on Oct. 26 from brain cancer.

During his life, the impact and influence Allen had on his students, colleagues, friends, the college and the community was deep and broad.

That point really hit home on Feb. 1, 2012 when Michael Arad, the architect of the National September 11 Memorial in New York City, came to Georgia Tech – his alma mater – to speak as part of the Douglas C. Allen Lecture Series.

Arad, who had been an architect with the New York City Housing Authority, submitted his Memorial design “Reflecting Absence” as part of a global competition. His design was selected from more than 5,200 entries from 63 nations.

So when Arad came to give his lecture at Georgia Tech, he spoke at length of all the lessons he had learned from Doug Allen, his beloved professor. 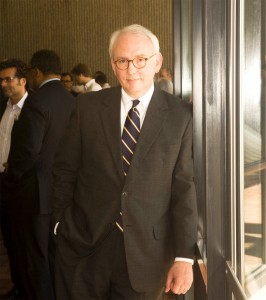 “Doug Allen taught me to see the built environment in a way that opened my eyes: pulling back the field of view from an individual building to see it as part of a landscape over both time and history,” Arad is quoted as saying. “He did that for thousands of students whose focus would have otherwise remained on individual buildings. He led us to think of architecture in a larger way; a way that recognizes the whole, not just the parts.”

Allen grew up in West End, graduated from Brown High School, attended North Carolina State University, and graduated from the University of Georgia in 1970 with a Bachelor of Landscape of Architecture, according to his obituary.

Early in his career, he worked for Designer’s Collaborative in Athens, and then for William H. Laubmann and Associates in Atlanta where he worked on the Chattahoochee Corridor Study for the Atlanta Regional Commission.

Starting in 2002, Allen shifted from teaching to administration. He served five years as Associate Dean for Academic Affairs, a year as Interim Dean, and another three years as Senior Associate Dean.

Since his retirement in 2011, he returned to the classroom where he did what he loved best, teaching. In the fall of 2013, he was honored by election to the Council of Fellows of the American Society of Landscape Architects (FASLA).

Allen made seminal contributions to the field of landscape architecture, particularly to the study of cities and the urban landscape. He published, served on juries, and lectured widely, at universities all over the United States. He served for several years on the editorial board of Places Journal.

He co-founded the Study Abroad Program in Italy. For more than 20 years, he led this highly popular program until his retirement. He made the past come alive through his thoughtful and vivid lectures. Students from disciplines as varied as engineering and the humanities were profoundly impacted by Allen’s teaching. He brought the impact of the ancients in Rome and environs on their world to the front and center of today’s challenges and opportunities in designing, living, and working in urban environments.

Students and colleagues have shown their esteem for Allen in many ways. One of his proudest moments was winning the ANAK Award in 2006 – bestowed annually by a Georgia Tech secret society, to a single professor for contributions to the students of the Institute.

Allen also was honored by his former students and colleagues when they endowed the lecture series in his name. The Douglas C. Allen Lecture invites renowned landscape architects and architects from the United States and all over the world to lecture at the College of Architecture at Georgia Tech.

In 2013, he was honored by his alma mater, the University of Georgia, with the Distinguished Alumni Medal by the College of Environment and Design. He delivered the commencement address to the College in May, 2014, at the invitation of Dean Daniel Nadenicek.

Professionally, he practiced landscape architecture for more than 40 years, designing and planning commercial, residential, and institutional projects for both public and private sector clients all over the world, from Smyrna to Baltimore, and as far away as West Bank, Israel.

Former students working in many spheres have said they are forever influenced by him in their work.

Allen was not only a gifted teacher, lecturer, and administrator. He loved and was fully devoted to his family. He was a full-time husband, father, and grandfather. He spent countless hours over the years taking care of his family, especially while his wife, Kathy, flew for Delta Airlines. He dearly loved watching his daughter, Jordan play soccer as a child. He would play with Jordan and his beloved border collie, Rock, in the neighborhood parks. More recently, he has enjoyed watching his daughter and son-in-law, Alex, become devoted parents.

He traveled with Kathy to England, France, and Switzerland in the past couple of years and made a final trip to Rome with Kathy and friends just a few months ago. Over his entire adult life, Doug Allen enjoyed having wine, dinner, lively conversation, watching Georgia football, and mostly sitting quietly in his backyard enjoying the peace and solitude of his garden.

He is survived by Kathy Hill Allen, his wife of 42 years, his daughter Jordan Allen DeLoach, son-in-law Alex DeLoach, and his two grandchildren, Nora and Mary DeLoach.

Online condolences may be made at hmpattersonspringhill.com.