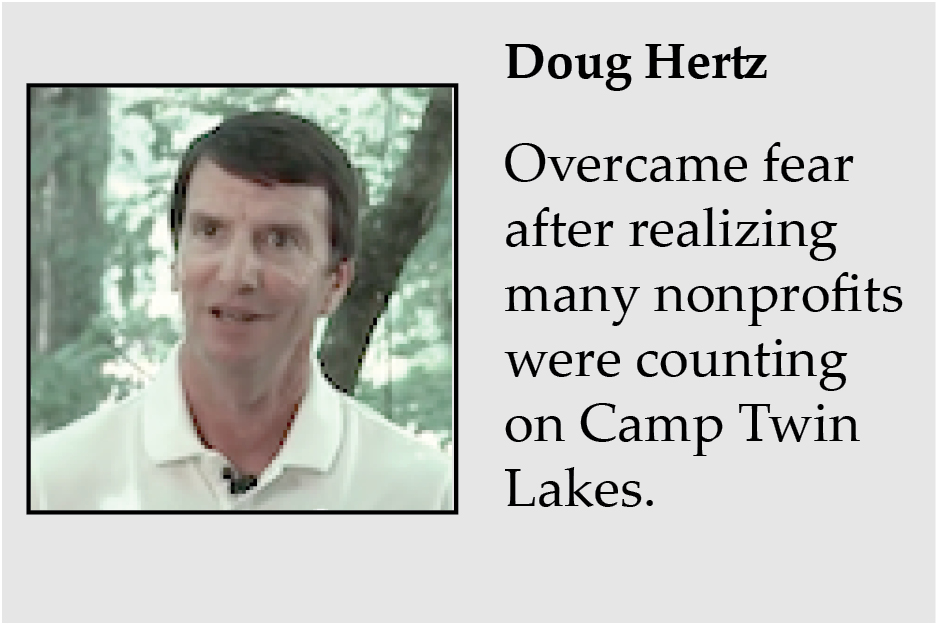 Doug Hertz wears a lot of hats these days, but a couple of weeks ago he was worried he wasn’t wearing the right shirt. Not that there’s anything wrong with wearing a Falcons shirt – after all, he’s an owner now.

But on this day, he was supposed to be talking about Camp Twin Lakes, which he founded 20 years ago after he spotted and then solved a common issue among nonprofit groups serving children with various kinds of illnesses. These camps all needed a home – and the ability to provide custom medical services.

That’s when Doug had his Moment.

“My Moment came in 1990 when I was attempting to progress the idea of Camp Twin Lakes forward amongst the philanthropic community in Atlanta and it was one of the most frightening Moments of my life,” Doug told us in our accompanying video. “And the reason it became so frightening was that it was so much fun to go out and talk in abstracts and talk about an idea, but they quickly said, ‘Gosh, you don’t have a board, you don’t have a facility – do you really know what you are doing?’ ”

Doug knew what he was doing. A few years after earning college and MBA degrees at Tulane, he was working with KPMG New Orleans in accounting and consulting when the family patriarchs running his family’s liquor distribution business were contemplating selling the business unless another family member stepped forward.

In 1978, Doug joined the firm his grandfather helped found in 1940. He became president of United Distributors in 1982. He led the charge to add wine to its portfolio and when the firm acquired another wine distributor, it suddenly found itself the distributor of a few small craft beer labels. Doug decided to expand further into the beer business, adding Coors in 1992 and in 2004, bought Better Brands, which brought in the Miller beer line. Today, United is the largest alcohol distributor in Georgia and Alabama and is one of the 25 largest private firms in Atlanta.

Doug seems to have the magic touch for making deals. When one of the original local craft breweries that United had helped found wanted to move to the Anheuser-Busch network, Doug agreed to release it from its United contract. He then signed another recent startup local craft brewery called Sweetwater. Today, Sweetwater beers are one of the most popular craft beers in the Southeast, dwarfing the sales of the other beer that United had reluctantly released.

After his mother was diagnosed with cancer in the early 1980s, Doug went to a board meeting of Camp Sunshine, a summer camp for kids with cancer. He heard that similar nonprofits serving children with various serious illnesses all needed to rent summer camp locations, but were competing for early or late openings at existing camps – openings that conflicted with school calendars.

On advice from the Woodruff Foundation, which offered support if he could find appropriate land, Doug went to see Georgia-Pacific and outlined his need: a few hundred acres with streams and lakes. A few weeks later, the large corporate landowner called Doug and said they had 115 acres near Rutledge, Georgia, with two lakes on it they were willing to donate to his cause. Camp Twin Lakes has since bought an additional 250 adjacent acres.

And so the idea for Camp Twin Lakes took off. Soon dozens of groups serving children who had heart transplants or brain injuries or sickle cell anemia were dreaming they’d finally have a home and were lining up for a week at the new camp.

“That Moment for me in late 1990 was after 12 or 18 months of discussions and investigations and talking and I had lined up so many people who were going to invest their time and put their faith in me and I realized Camp Twin Lakes was probably going to become a reality,” Doug said.

“That Moment was one that filled me with fear. The fear of failure is one of the great motivations, but not just the fear of failure personally, but the of fear failure for so many people who put their faith and trust in you. That was my Moment. I realized I couldn’t afford to fail.”

He didn’t. Standing on a shaded deck as hundreds of kids with heart transplants walked behind him to various programs during Camp Braveheart on July 11, Doug honored the thousands who have donated their time and treasure to support the idea he helped hatch.

“It’s been terrific. I’m incredibly proud of what happened and how many people helped me get that started. We served 800 kids the first year and now we are open 48 weeks a year and we are serving nearly 9,000 people at three separate facilities,” he said. “So in 20 years, that Moment has proven to be a great investment.”

Camp Twin Lakes’ success prompted two competing hospitals to ask Doug to serve on their boards at the same time. He became a trustee of Egleston and declined the offer from Scottish Rite, yet his relationship with each led Doug to see similar missions and missed opportunities. Soon Doug and other community leaders negotiated a merger of Scottish Rite and Egleston hospitals into Children’s Healthcare of Atlanta.

In July 2009 Doug’s friend Arthur Blank offered him the opportunity to become a limited partner in the ownership of the Atlanta Falcons, fulfilling the lifetime dream of a “sports junkie.”

Last November, Doug and his wife Lila – who have two adult children and two grandchildren – helped cut the green ribbon on Tulane’s new 43,000-sf Hertz Center, a basketball and volleyball practice facility that a New York Times sportswriter tweeted might be the best in the country.

“We hope that it will prove to be a springboard for a complete renaissance for all of Tulane Athletics,” Doug told the assembled opening day crowd at his alma mater in New Orleans. “Tulane has been incredibly important to me and my entire family and we’re privileged to be in a position to be able to give back.”

Next week in Moments: Arthur Blank, owner of the Atlanta Falcons, remembering the Moment he and Bernie Marcus were fired and then started Home Depot.