A 120-year-old Victorian mansion that is a long-endangered historic gem of Downtown Atlanta may have a new owner who is pledging to restore it for future glory. 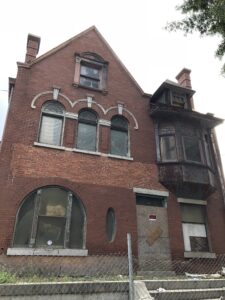 The Rufus M. Rose House at 537 Peachtree St. is under contract to be bought for $1.65 million by UC Asset LP (also known as UCASU), a Chamblee-based real estate development company, the firm announced June 30. The company did not say what it plans for a future use of what it calls the “Rose on Peachtree,” but said the mansion and its many original details will be saved.

“UCASU plans to fully refurbish and restore the Rose on Peachtree to preserve its historic legacy, and to work alongside city leaders and influencers to promote the diverse and socially inclusive future of Atlanta,” the company said in a press release.

The mansion is listed on the National Register of Historic Places and is under City of Atlanta landmark status protection from demolition and exterior alteration. 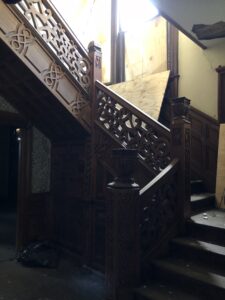 A staircase is among the well-preserved features of the Rose House. Credit: Atlanta Preservation Center

The long-vacant mansion, which sits across the street from Emory University Hospital Midtown, was last in the news in early 2020 when former owner Inman Park Properties was proposing a restaurant use.

The mansion was built no later than 1901 by Rose, a druggist and former Confederate soldier whose R.M. Rose Co. is credited with creating a nationally popular whiskey called Four Roses. It remained in the Rose family until the mid-1920s, according to the National Register listing.

From around 1945 to 1993, the mansion was home to an antique store and an “Atlanta Museum” operated by J.H. Elliott. The “museum” included Civil War artifacts and items that once belonged to “Gone with the Wind” author Margaret Mitchell, among others. The mansion museum had no connection to the Atlanta History Center, the well-known history museum now based in Buckhead.

Correction: This story has been updated to clarify that the property is under contract with the sale not yet finalized. More photos of the Rose House’s interior have been added to this story.

Another fireplace that survives inside the Rose House. Credit: Atlanta Preservation Center