How can we uplift local leaders seeking climate solutions? How can I help make a difference? How can I help create a healthier and more just world? These are a few questions examined in Project Drawdown’s new documentary. 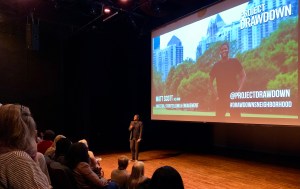 “While often publishing the story can be an endpoint, this is truly only the beginning for the series as we continue to carry these stories and engage folks nationwide and worldwide,” said Matt Scott, director of storytelling and engagement. (Photo by Kelly Jordan.)

Project Drawdown is a nonprofit that aims to help the world reach “drawdown” — when levels of greenhouse gasses begin to fall rather than climb — as quickly and equitably as possible.

In addition to highlighting local changemakers, the documentary investigates the idea that each person can become part of the climate solution. The story is focused on Atlanta and its people, but addresses questions that are posed globally.

“You can find climate heroes everywhere. Being part of climate solutions is something that shouldn’t be extraordinary, it should be ordinary,” said Drawdown’s Director of Storytelling and Engagement Matt Scott, who emceed the event and conducted the interviews featured in the documentary.

In an email to SaportaReport, Scott added: “Our goal is to help the world reach ‘drawdown’ by supporting each person in finding their unique role in climate solutions. To do this, we prioritize ‘passing the mic’ to those who often go unheard, and producing stories of everyday people who help other everyday people see their power.”

“Why shouldn’t Georgia be a leader in this space?” Beasley said in the film. “I hope when others look at what we’re doing, they ask themselves the same question. Why not Alabama? Why not Florida? We all have resources that we can draw on to come together around a common goal.” 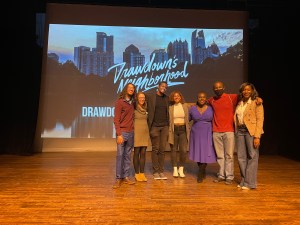 For Beasley, a major source of inspiration in her climate fight comes from her children.

“When you have kids it’s impossible to not think about the future we’re leaving for them,” Beasley said. “When you start hearing projections of what the world will be like in 2050, 2080 and 2100, you realize your children will see every day of those years, God willing.”

Change can be made on a small, interpersonal level, too. At Georgia Tech’s Kendeda Building, Horticulturist Steve Place aims to create a tranquil place for students, using the garden to calm their minds.

“[Georgia Tech] is an incredibly demanding environment and because it is so demanding, not everyone does well,” Place said. “The environment I help create here diminishes that sense of hopelessness or being lost. I try to get them to just slow down.”

Ultimately, the goal of the multi-part documentary series is to uplift Atlantans who are dedicated to finding climate solutions, while bridging the gap between climate conversations and everyday residents.

If you ask Demetrius Milling, assistant farm manager at the Love is Love Farm, the Drawdown team got it right.

“[The documentary] focuses on how important you are, no matter your background, to climate. We can all do something,” Milling said. “Thank you for telling the stories of everybody here. I’m sitting up straighter, like, I got power, I can do something and I can make change.”

Wednesday’s event offered a sneak peak at the series, and the documentary will be released globally on Nov. 15. Click here to learn more before the release date.