In the spring of 1970, Georgia’s then comptroller general and Republican gubernatorial hopeful, Jimmy Bentley, dispatched 65 telegrams to state and national leaders – including President Richard Nixon – all in an attempt to have the date of the country’s first Earth Day celebration changed.

The reason? Bentley noted that April 22 fell on the birthday of Vladimir Ilyich Lenin, the founder of modern communism. He told reporters that the celebration “will make us the laughing stock of the entire communist empire,” and said he believed that organizers chose the date intentionally.

Georgia Gov. Lester Maddox agreed that the chosen date “smacked of a communist plot,” according to The Atlanta Constitution.

Of course, Earth Day was not a communist conspiracy. It was a call to clean up our rivers and stop polluting our air … and it worked.

But in 1970, that fear of “government-control” which found its voice as a “fear of communism” in both Bentley, a Republican, and Maddox, a Democrat, ran deep. Nothing should stand in the way of capitalism, and in the middle part of the 20th century, Georgia welcomed industrial development with open arms. From Dalton to Valdosta, the state was starved for jobs, and if it meant we sacrificed a few fish, that was a reasonable price to pay. 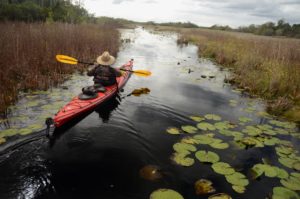 A 1948 headline in The Atlanta Constitution reporting pollution of the Ocmulgee River from a Macon paper mill succinctly summed up the conflict: “Pay Rolls vs. Fish Up For Georgia Debate.”

Of course, pay rolls and jobs carried the day. The General Assembly didn’t adopt the Georgia Water Quality Control Act until 1957, but, in a pattern that continues to the present day, this legislation deferred to industry. The act created a Water Quality Control Council, charged with enforcing anti-pollution measures. Unfortunately, that seven-member council was comprised primarily of representatives from polluting industries and municipalities.

In the first six years of the council’s existence, it never forced anyone to stop polluting. Instead, it asked for voluntary action. Of the 83 polluters they appealed to, only 14 complied. Others made “plans;” still others did nothing.

The 1972 federal Clean Water Act changed that dynamic, and since then the noxious, fish-killing effluent has mostly ceased, though in many cases, it took legal action by citizens – not the power of state or federal government – to force cleanups.

Today, if you talk to Georgia’s professional river advocates, they will tell you that big business still wields undue influence when it comes to protecting our water. 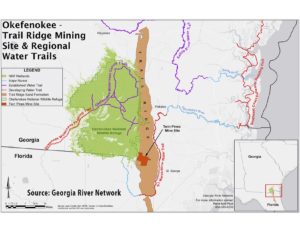 On Earth Day 2021, advocates of the Okefenokee Swamp continue to raise alarms about a proposal to mine sand from land along the eastern border of the swamp. A permit to mine is pending before the state Environmental Protection Division, of the Georgia Department of Natural Resources. Credit: Georgia River Network

This is especially evident in the current fight to save the Okefenokee Swamp from a proposed heavy minerals sand mine on Trail Ridge, the geological dam that helps regulate water levels in the swamp. The mine aims to produce titanium, a common mineral used primarily as a whitener for things like paper, plastic, paint and even toothpaste.

Twin Pines Minerals, LLC, the Alabama-based company behind the mine, has spent a reported $300,000 on lobbying firms to influence state and federally-elected officials. According to reporting by The Washington Post, among those hired was a firm where one Ashton Harper worked. It seems Twin Pines choice of firms was strategic.

Ashton’s brother is Sen. Tyler Harper (R-Ocilla) who chairs the Senate’s Natural Resources and Environment Committee and also represents Charlton County, site of the proposed mine.

In the recently completed General Assembly session, legislators were conspicuously quiet on this threat to the Okefenokee. The same is true for Gov. Brian Kemp. During the past several months, Kemp has received some 8,000 e-mails and letters and more than 2,000 phone calls from citizens urging him to protect the Okefenokee, according to the advocacy group Georgia River Network.

To date, he’s given no response. Meanwhile, his Environmental Protection Division is reviewing permit applications which, if approved, will open the door to mining in this environmentally sensitive area.

The state’s decision on this mine will be a litmus test on the influence of big business. Will state leaders protect an international natural treasure and one of the state’s noted “seven wonders” or will they risk that uncommon wonder for a common mineral that can be obtained safer elsewhere?

If Georgia’s past deferment to industry is any indication, the Okefenokee may be in trouble. But, then again, maybe there’s hope. A former Georgia governor, the late Zell Miller, and his Board of Natural Resources, did take a stand against a similar mining proposal in the 1990s and that one withered on the vine.

To learn more about the threat to the Okefenokee and take action to protect it visit: www.protectokefenokee.org