A rendering of the Jean-Michel Basquiat Fitness Court. (Courtesy of National Fitness Campaign.)

The City of East Point was recently selected as one of ten U.S. cities to partner on a new project with the National Fitness Campaign (NFC) to create a unique outdoor space where exercise meets art.

Through this initiative, NFC is aiming to create local iconic spaces for everyone to use, improving community health through the built environment and public art. With 500 cities already participating, the organization aims to install free, outdoor fitness courts in 1,000 U.S. cities by 2024. Three Georgia cities have already participated in the program — Tucker, Smyrna and Canton.

The idea here is to take the gym outside, making exercise more accessible and beckoning folks outdoors. The NFC fitness courts are equipped with a seven-step workout circuit, in lieu of a traditional gym. Each station focuses on a different body part, like assisted pull-ups, a lunge course and an agility ladder.

Folks can also work up a sweat with in-person classes with certified fitness court ambassadors, along with online classes available for different ages and abilities.

Not only an effort to get folks active, the new Fitness Court will also serve as an ode to a beloved creative. Basquiat is a famous American artist who passed away in 1988 at age 27.  He was known for his unique blend of graffiti and abstract expressionist painting, along with his friendship with Andy Warhol. His artwork is available for use on this project thanks to Artestar, a global licensing agency and creative consultancy. 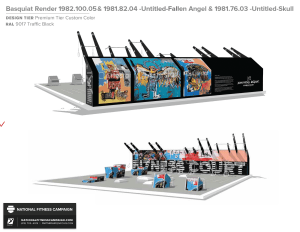 The new Fitness Court will be constructed at the John D. Milner Athletic Complex, only a 15-minute walk from the East Point MARTA station. City leaders are currently working on the project’s fundraising strategy, according to East Point Public Information Officer Shannon Wiggins, and are reaching out to local experts and partners to join the campaign. Organizations interested in joining the effort can reach out to the city’s Public Art Coordinator Christopher Swain.

As a two-term mayor, community fitness and wellness have long been a priority for Ingraham. She spearheaded the 90-day Healthy Point Initiative — which has since turned into a four-year tradition — offering free workout classes with the mayor or city council three times a week, cooking demonstrations with celebrity chefs and healthy movie nights.

The City is expected to release more information about the construction timeline once its fundraising plan is solidified. In the meantime, folks can check out a local Fitness Court or click here to learn more about NFC.