Duncan was the morning keynote speaker at the 2013 National Business Leader Summit on Early Childhood Investment at the Loews Atlanta Hotel — a two-day conference that attracted about 200 business and education leaders from around the country.

“We have to get out of the catch up business,” Duncan said. When children enter elementary schools already falling behind their peers, it is harder and harder for them to ever catch up.

Studies have shown that a $1 investment in early education ends up bringing a $7 return on investment by saving costs in remedial education, welfare and the criminal justice system.

“A 7-1 return on investment — that’s a good deal,” Duncan said. “The fact is that we as a country don’t think about long term investments does our country and our companies a disservice. What scares me frankly is that other countries are thinking much more long term than we are.” 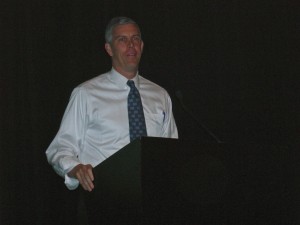 Duncan went on to say that other countries, such as China, are making sure their children will get three years of early learning by 2020.

“China is going to out educate us and out innovate us,” Duncan said. “We have to get our babies off to a great start.”

Duncan said that it’s not just the language and reading skills that children pick up when they are enrolled in a quality early learning program, but it’s also what some people refer to as the “soft skills” — learning team work and social interaction — skills that Duncan said are critically important to success.

The good news is that early education is an issue that has bipartisan support. Many governors of red states, such as Georgia’s Gov. Nathan Deal, who Duncan referred to as a “strong conservative,” understands the importance of early education.

“They get it without any federal partnership. They are stepping up,” Duncan said. “But every where I go, there are these massive waiting lists. We want to double the access from 1.1 million to 2.2 million.”

Duncan said that President Barack Obama does not envision “a big new federal program.” But the administration does understand that investing in early childhood education will save the nation money in the long run.

”We are nowhere hitting the need,” Duncan said. “It is not a mandate. We just want to help reduce the waiting lists.”

Then Duncan addressed the political realities of today’s Washington D.C., saying that he enjoys traveling outside of the U.S. capital to cities like Atlanta to get away from the dysfunction that exists between the political parties.

It’s only going to happen from the outside-in,” he said. “We have got to have thoughtful moderate Republicans to step in. We have to work together. This is a non-traditional issue for the business community.”

Duncan said the next couple of months were going to be a crucial time to get support for a federal investment in early childhood education, which he said would be implemented in partnership with state and local programs.

Duncan then looked over the crowd of business and civic leaders at Monday morning’s event, and he said: “I can’t tell you how hopeful this makes me.”