Electric buses charging with a Heliox system at Amsterdam's Airport Schiphol in the Netherlands. Credit: Heliox

A European company that makes fast-charging systems for electric vehicles will open its North American headquarters in Atlanta next month, state officials announced May 12.

Netherlands-based Heliox expects to open its new campus around June 1 at 165 Ottley Drive in Buckhead’s Armour neighborhood, near SweetWater Brewing Company in a booming business area pegged for a future Atlanta BeltLine trail segment. Featuring both corporate offices and a research and development division, the HQ is expected to create 70 jobs within the next year, according to a Georgia Department of Economic Development press release. 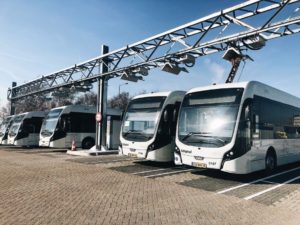 Electric buses charging with a Heliox system at Amsterdam’s Airport Schiphol in the Netherlands. Credit: Heliox

And the headquarters is coming without any special financial incentives from the state or the Development Authority of Fulton County, according to officials at those agencies.

“I am glad that Heliox has selected Georgia as their North American home,” said Gov. Brian Kemp in the press release. “Georgia’s reputation as the number one state for doing business, as well as the state’s unwavering support for private-sector innovation, has continued to create countless jobs for hardworking Georgians and put Georgia on the world stage as a leader in the transition to e-mobility.”

Founded in 2009, Heliox has a big business in charging stations for electric public transit vehicles in Europe, from “zero-emission” ferries in Copenhagen to e-buses in Luxembourg. It also builds, operates and maintains charging systems for trucks, construction vehicles and port equipment. Among its U.S. customers is MARTA, which uses Heliox’s 50-kilowatt chargers to charge electric buses undergoing service or repairs, according to transit agency spokesperson Stephany Fisher.

“Atlanta is the perfect launch pad for our North American operations,” said David Aspinwall, President of Heliox North America, in the press release. “Locating both the headquarters and the research and development training facility in Atlanta, we will be close to our customers to offer the highest level of support and service. In addition, the local talent available in the city and universities will fuel our rapid growth. It is an exciting time for the electric vehicle market, and we are excited to grow our technology in the U.S.”

A publicity image of a Heliox charging system in use on a bus. Credit: Heliox

State Economic Development officials, the Metro Atlanta Chamber and Georgia Power worked on bringing Heliox to town, according to the press release, and the company is working with Georgia Tech on internships and possible research and development partnerships. Katie Kirkpatrick, the Chamber’s president and CEO, said in the release that the company’s arrival is another example of how “metro Atlanta is rapidly becoming a global hub for the EV [electric vehicle] industry with a wealth of innovative engineering talent.”

Update: This story has been updated with comment from MARTA.