The spring head beneath the Tabernacle feeds into Proctor Creek. (Photo by Kelly Jordan.)

For a landlocked city, Atlanta sure has a lot of water — with neighborhood streams trickling through the city, feeding into the region’s waterways and, eventually, reaching the Atlantic Ocean or Gulf of Mexico. Beneath Atlanta’s surface, though, is an intricate, unknown water system that was paved over to accommodate the city’s growth. 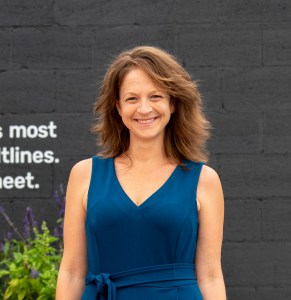 As an ode to the waters that run underneath the city, Atlanta-based interdisciplinary artist Rachel Parish created “Emergence,” a series of temporary monuments that sit atop four springheads in downtown. These unseen aquatic sources lie underneath some of Atlanta’s most noted sites — the Georgia State Capitol, Grady Hospital, the Tabernacle and the Gulch.

The project runs from Sept. 30 to Oct. 2 and is presented by Flux Projects in conjunction with the City of Atlanta’s ELEVATE festival. Flux Projects is a local nonprofit that enlists artists to create public art that tells stories about the city’s sites and people.

Through “Emergence,” Parish peels back Atlanta’s built infrastructure, revealing the story of the city’s hidden waterways that fuel the region’s rivers and creeks. She describes the temporary monuments as if “you reached down into the earth, pulled up a chunk of concrete, turned it over and saw what was underneath.” 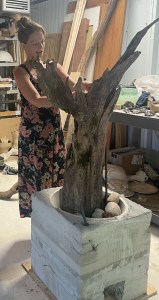 In this project, Parish sees Mother Nature as her collaborator. The monuments are designed like a fountain — a concrete base representing the built environment, filled with water and a piece of weathered wood erected in the middle, both collected from riverbeds adjacent to each site. The water-worn logs are adorned with ceramic covered in a metallic glaze, which was molded from other trees and rocks found at the water’s edge.

“There’s language and poetry in what the water has done to the tree roots, which I could never craft,” Parish said. “My work is really rooted in listening. There’s language in nature and you can challenge yourself to tune in, listen obliquely and listen more deeply.”

She continued: “These sites are origin points for the water and offer [insight] into origin stories for ourselves,” Parish said. “If we don’t have the understanding that we live in relation to this really deep ecological history that’s undergirding everything we built and is still an active part of who we are, then our stories are fundamentally incomplete and our frameworks are incomplete.”

Although Parish has long had a deep appreciation for the earth, her previous work has often been “hyper-focused” on the human experience. Wanting to push herself as an artist, she opted to instead tell a story through nature.

“Having a close relationship to the land [is a value] I grew up with. I don’t see myself as disconnected from nature, I see myself as part of it,” she said. “I’m really heavily weighted towards listening to people, but what happens if I tune my frequency into collaborating with my ancestors and ecological voices?” 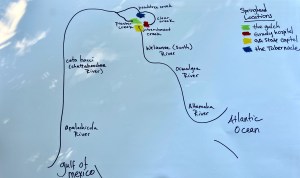 In addition to the temporary monuments, “Emergence” will feature live performers along with sound and video projections of the site’s adjacent rivers. The performers will tell stories about water from around the world while also using mica to create lines showing the directionality of the obscured waterways.

“[I hope] people are inspired and intrigued by their relationship to the land they walk on and think, ‘There’s so much more beneath my feet,’” Parish said. “That spark of interest, intrigue and connection to the land is something we often take for granted, but can be a beautiful outcome.”

“Emergence” will run from Friday, Sept. 30 to Sunday, Oct. 2. Anyone interested is invited to check out the ongoing public performances or Parish’s artist discussion. Click here for more project details.