A photo illustration of the concept for the first phase of the Emory housing project, as seen at the corner of North Decatur Road and Haygood Drive. The image is from a university presentation.

An Emory University proposal for a three-building graduate student housing complex on its Druid Hills campus is raising concerns from traffic to historic preservation — including the impact on one of the oldest houses in DeKalb County, which the university may demolish or move down the street. 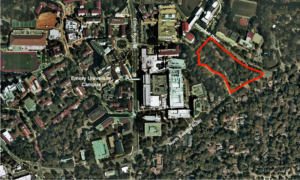 An aerial photo of the Emory University campus area with the site of the proposed graduate and professional student housing outline in red, as shown in a university presentation.

Sketched out as housing 1,000 students and a 275-space parking garage, the plan for a 6-acre site at North Decatur Road and Haygood Drive is in an early stage, with a first-phase groundbreaking intended for fall 2022. But some local residents and officials are concerned about their leverage, since most of the campus was annexed into the City of Atlanta in 2018 while even most people right across the street remain in unincorporated DeKalb. In fact, as part of the proposal, Emory is petitioning for Atlanta to become bigger by a single house — the one remaining residential property it needed for the site, which remained in DeKalb and which it bought last year.

DeKalb County Commissioner Jeff Rader, whose District 2 includes the area, says the project is “problematic” for traffic and aesthetic impacts. “This tension and DeKalb’s lack of jurisdiction to reconcile these concerns are the direct consequence of Atlanta’s colonial annexation of this important area of unincorporated DeKalb,” he said.

Emory says the project is needed to remain competitive in attracting graduate and professional students and will reduce traffic by being a short walk from other campus facilities. “This initiative will improve our student experience, offer competitively priced housing and foster a stronger and more vibrant community for Emory’s graduate and professional students,” said David Payne, Emory’s associate vice president of planning and engagement, in a written statement through a spokesperson.

It’s also the type of use Emory has contemplated for decades as it bought up around 28 residential properties on the block bounded by North Decatur, Haygood and Ridgewood Drive. The university already demolished many of those over the years, with about a dozen remaining.

Unlike virtually the entire adjacent areas, the block appears to be outside Druid Hills’ Historic District, which is on the National Register of Historic Places, and city and county equivalents that could restrict demolitions. Some of the existing houses are around 80 years old, according to county property records, but the plan calls for removing them all.

However, Emory is sensitive about one of those houses: 1848 North Decatur, which local historians suspect dates to before the Civil War, though it has been extensively altered since then. According to a 2008 Druid Hills Civic Association newsletter report about a historic survey, the property is known as the Paden House for the family that once owned the area of Emory and the Druid Hills Golf Club, and is the last surviving house of theirs. 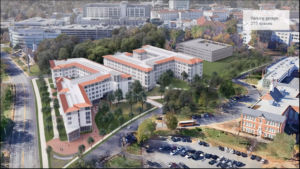 A photo illustration of the concept for the first phase of the Emory housing project, as seen at the corner of North Decatur Road and Haygood Drive. The image is from a university presentation.

In a June 23 virtual meeting briefing the neighborhood about the plan, Payne said that, “if conditions permit,” Emory would move the front section of the house — the oldest surviving part, he said — down the street to the northwest corner of Ridgewood and North Decatur.

For now, the civic association says it is in wait-and-see mode about the plan. And two historic preservation organizations, the Atlanta Preservation Center and Historic Atlanta, say they are waiting in the wings to help the neighborhood if needed.

“The Druid Hills Civic Association is actively working to communicate with residents regarding the project and to gather neighborhood input,” said DHCA Chair Van Biesel. “We hope to work closely with Emory University as the project progresses. We do not have a formal position at this time.”

“It is always complicated when we lose our historic fabric, particularly that space that represents what part of Atlanta you identify with. The Atlanta Preservation Center is always willing to advocate for preservation in any neighborhood we are fortunate to partner with,” said David Yoakley Mitchell, the center’s executive director. “We are following this and watching its evolution.”

The group Historic Atlanta declined comment, said treasurer Clint Tankersley, “because we are deferring to the Druid Hills Civic Association on this neighborhood issue; however, we are available to assist them, if needed.”

The Historic Preservation office in Atlanta’s Department of City Planning is aware of the proposal only as “a general idea proposed by the university,” according to a spokesperson.

The early plan and early reaction

The project site consists of open land and the single-family houses, which Emory owns and leases, though Payne would not specify to whom. The intent is to let the leases expire, requiring occupants to leave, before development. Some are already vacant, Payne said. One of the residential properties, 1971 Ridgewood, is the one Emory is seeking to annex into the City of Atlanta.

Emory’s current proposal — the design is not finished —  has two phases of construction. The first phase consists of two five-story buildings housing about 500 tenants in a range of unit sizes, from “micro-studios” to two-bedrooms; the unit count is not yet specified. The first phase also includes the parking garage, a six-story structure that might have one or two levels below-grade. The second phase would build housing for around 500 more tenants in a seven-story structure wrapped around the parking garage. 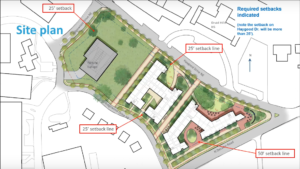 A site plan of the first phase of the Emory housing project includes two buildings and a parking garage. The illustration is from a university presentation.

The rough timeline is for the first phase to start construction in fall 2022 and open in fall 2024. Construction of the second phase then would begin, with an opening in 2027. The complex would be a “public-private partnership” managed by a third party. Emory did not respond to a question about the budget.

Emory has created a webpage for the project here.

Payne said Emory has discussed the plan with DHCA and with the DeKalb County School District, whose Druid Hills High School — itself a historic structure — is directly across Haygood from the site. The district did not respond to a comment request.

While the DHCA has no position yet, the project is the talk of the neighborhood. One nearby resident who asked for her name to be withheld said she has “an interest in preserving the historic district and neighborhood feel.” She said she believes the project is proving concerns that Emory wanted to be annexed by Atlanta to get more lenient building and construction review, and worried about its changes to zoning and lack of a transition with the adjacent neighborhoods and public schools.

“This development overshadows Druid Hills High School, going from 1.5 stories to 5 to 7 stories,” she said in an email. “While I think many support the need for affordable housing, the neighborhood has struggled with traffic, speeding and Emory expansions (current and even those planned for the future).”

Rader, the DeKalb commissioner, said his concerns at this stage include a lack of design attention to what should be a gateway to the campus. He called the looks a “cheap postmodern reference to the marble-clad Italianate style of the main campus nearby” and a conflict with a county zoning overlay district in the area intended to create better design.

Rader said he is also concerned about the “inattention” to commuter traffic on Haygood and the impact to the high school. He said Emory once commissioned a design for a realignment of Haygood that is not part of the plan and could be precluded by it. He said he’s also concerned that it could preclude a possible route for MARTA’s Clifton Corridor, a light-rail line intended to run through the area between the Lindbergh Center and Avondale stations. Rader said he understands Emory will submit the project to the Atlanta Regional Commission for review under its “Development of Regional Impact” program that may address such concerns.

For the community, Rader said he is concerned the formal local review will be through the City of Atlanta’s Neighborhood Planning Unit F, which he described as more centered on the Morningside area. He said that “…because Emory is isolated from those neighborhoods, my experience is that the City’s regulatory posture favors the institution over the community.”

Correction: An earlier version of this story incorrectly identified the corner to which Emory may relocate the historic house.