Ophthalmologists at Emory will use federal funds to investigate vision issues that can afflict a third of Ebola survivors, sometimes leading to blindness. Emory has led in Ebola research and treatment since the first patients with Ebola in the United States were successfully treated at Emory University Hospital in 2014.
Share5
Tweet
Share
Pin
Pocket
WhatsApp
Buffer3
Email
Reddit
8 Shares

Emory’s research funding in 2019 reinforces a record of successful innovation and seeks to unlock the mysteries of the human condition.

On a perfect spring day in 1985, Craig Washington woke up with swollen lymph nodes. A good friend verbalized his deepest fears. “He told me I was experiencing the first sign of ‘it.’ I knew he meant AIDS, and I remember feeling this bolt of terror,” Washington says.

It was the same year that Rock Hudson died, the first high-profile fatality from a disease that was then considered a death sentence. 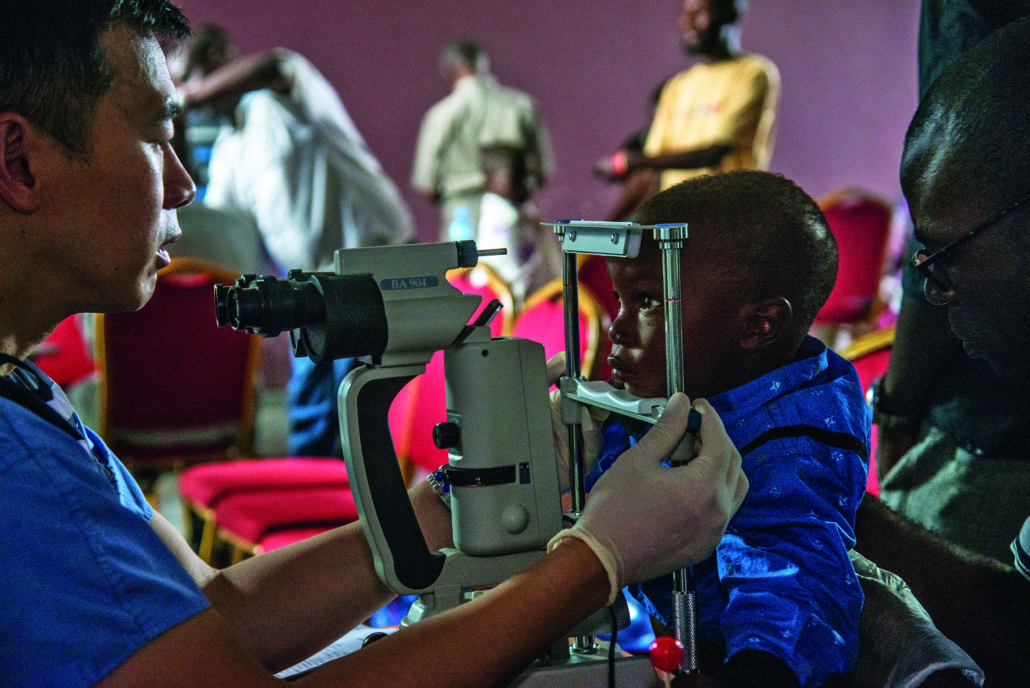 Ophthalmologists at Emory will use federal funds to investigate vision issues that can afflict a third of Ebola survivors, sometimes leading to blindness. Emory has led in Ebola research and treatment since the first patients with Ebola in the United States were successfully treated at Emory University Hospital in 2014.

Today, Washington is not only alive but says he’s living his best life. The Atlanta resident credits much of his active lifestyle to drug treatments that have helped HIV/AIDS patients live longer and better: Treatments such as Emtricitabine, which was approved for use in 2003.

Emtricitabine was developed at Emory by chemistry professor Dennis Liotta, pediatrics professor Raymond Schinazi and then-researcher Woo-Baeg Choi; it is now used by 9 out of 10 HIV patients in the United States to treat their condition.

Additionally, Emtricitabine is increasingly being used for HIV prevention; currently, more than 130,000 people take it in a medicine for pre-exposure prophylaxis, or PrEP. Not one to rest on his laurels, Liotta remains deeply invested in looking for new remedies for HIV including ones that are longer-acting.

Like Liotta and Schinazi, hundreds of research faculty and students at Emory are focused on solving the critical problems of our time and collaborating with peers around the globe to tease out the next potential blockbuster innovation.

Pediatric hematologist Wilbur Lam, a faculty member at Emory and Georgia Tech’s jointly run biomedical engineering department, has worked with a graduate student to develop a novel smartphone app to detect anemia. The non-invasive tool, which uses fingernail pictures to measure hemoglobin levels in the blood, will be released at the app store in the next few months.

Much of Liotta and Lam’s work is made possible by the sizeable investment in research from a variety of sources, most notably federal agencies.

In fiscal year 2019, more than half of Emory’s total $689.1 million in research funding came from the federal government, the university’s largest sponsor. The National Institutes of Health (NIH) remained the single-largest contributor, accounting for close to 85 percent of funds from the sector.

“Emory is extremely proud to partner with the federal government. Federal funding is important not only for its size, but also for its breadth, encompassing such disparate fields as social sciences, the arts, as well as the physical sciences and medicine,” says Deborah Bruner, senior vice president for research.

Emory has also upped its commitment to discovery, increasing funding to $53 million; this includes infrastructure investments that enable researchers to be competitive. Emory seeded two new $5 million initiatives, each aimed at catalyzing and nurturing growth in research across domains.

“Emory’s scientific enterprise has been well funded by government agencies and foundations, but as university leaders, we wanted to emphasize Emory’s commitment to university-wide fundamental research partnerships and to support that commitment through institutional funding,” says Jonathan S. Lewin, executive vice president for health affairs.

Support from private entities and industry continued to be robust, contributing $157 million and demonstrating that academic work has real world impact.

“Innovation and discovery are building blocks of the DNA of Emory,” says David Stephens, vice president for research at Emory’s Woodruff Health Sciences Center. “The strong collaborative research environment and the network of interdisciplinary research programs and cores link Emory schools and centers, and facilitate innovation and discovery across the campus and with key affiliates.”

More than 2,800 research proposals were greenlighted this year – slightly more than last year – and indicate that the pipeline for new research at Emory is strong. Over the last five years, Emory’s funding for research has increased by more than 20 percent.

So, why are these annual research funding totals important? Click here for details on game-changing discoveries at Emory made possible through investments in research.