James, who will be starting in her new role later this month, is coming to Atlanta from the University of Virginia’s Darden School of Business., where she has served as the senior associate dean and led the school’s executive education programs. 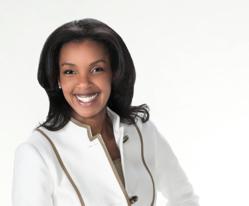 BloombergBusinessweek published an extensive interview with James on May 30th with a headline declaring her as the “First Black Woman to Lead a Top Business School.” The story went on to elaborate that it is the first time that a black woman has led a top-25 business school in the United States.

“I am very excited about the arrival of Erika James as the new dean of the Goizueta Business School, both in terms of what it means to Emory and to Atlanta,” said Ben Johnson, past chairman of Emory University’s board of trustees and the retired managing partner of the Alston & Bird law firm.

Johnson said he was looking forward to spending time with James on Wednesday when she was expected to attend an Emory University Board of Trustees retreat at Callaway Gardens.

“She is one of the rising stars in American business education and will continue the momentum of Goizueta’s rise into the upper ranks of American business schools and its focus on excellence and principled leadership,” Johnson continued.

In the BloombergBusinessweek interview with reporter Patrick Clark, James said that one of her goals in her new job would be to make the business school more accessible to different minority groups.

James also told the publication that she was looking forward to building strong ties with Atlanta-based companies.

“Atlanta is a mecca for corporate headquarters, and I want to make sure that we’re building strong relationships with those companies, in terms of Emory being seen as a go-to source for talent and connecting companies with our research faculty,” James said in the question and answer session. “On some level, all companies are struggling to think about their own needs for talent and leadership, and I want to make sure our faculty is actively connecting with the practicing community.”