Have you experienced something strange at any of these local sites? (Photo by Sabina Music Rich, Unsplash.)

Happy Halloween, Atlanta! If you’re looking for a good fright at a haunted site to celebrate the creepiest day of the year, local paranormal podcasters Becky Kilimnik and Diana Doty can help. 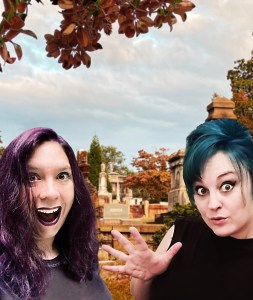 Throughout her life, Kilimnik has frequently found herself living in haunted homes — to the point where she assumed it was a normal occurrence for everyone — and Doty was the “spooky, weird kid who wanted to talk about ghosts all the time and nobody else did.”

In 2019, Kilimnik and Doty decided to take these experiences and their shared love for the paranormal to the public. The pair started Homespun Haints, a podcast to tell stories of hauntings and speak with folks who have encountered ghosts, demons and other paranormal phenomena.

Atlanta has long been regarded as a ghostly city. Kilimnik attributes the paranormal presence to the area’s history of upheaval and trauma — including generations of slavery and Sherman’s March to the Sea. Another theory points to the Chattahoochee River, where the granite and limestone serve as a conduit for ghostly energy.

According to the podcasting duo, some of the most haunted sites in the area are the Fox Theatre, the Kennesaw House and Roswell’s Sloan St. which leads into the Founders’ Cemetery.

The Founders’ Cemetery boundaries are unclear due to poorly marked graves and the passage of time, but a 2008 report found that the cemetery was likely much larger than the originally estimated 2.5 acres — meaning nearby homes are built atop graves. Over the years, there have been several reports of folks digging up human remains during construction.

Recently, the co-hosts went on a tour of the historic Kennesaw House, where the Marietta History Center is located. During the Civil War, the building was used as a hospital and morgue and is said to house 700 ghosts. 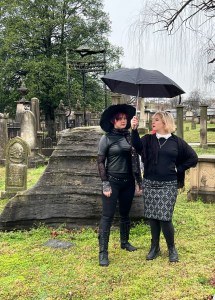 The co-hosts stroll through a cemetery. (Photo courtesy of Homespun Haints.)

During their tour, Kilimnik and Doty had their own unexplainable experiences. In one section of the exhibit, Kilimnik became extremely nauseous and Doty’s skin prickled like an electrical current was running through her.

“We walked out of the exhibit; we feel better. We walk back in; we feel prickly again,” Doty said. “I want to [use] the most analytical [approach] I possibly can, and this is replicable.”

Kilimnik also noticed an Employee’s Only door that was slightly ajar with the smell of gunpowder wafting out. “It was almost like it was inviting me into this little dark room, but I didn’t go in,” she said.

In their experience, the two have found that much like places, objects can be haunted, too. Kilimnik owned several antique porcelain dolls, gifted from her grandmother, and she and Doty had a running joke that they were haunted. One day, though, Kilimnik’s cousin picked one up and had a visceral reaction, warning her that there was “an evil spirit inside of it.”

“I did notice that when the doll was around, I wanted to play with it,” Kilimnik said. “When I put it away, it was like out of sight, out of mind. I’m not a doll person; I think they’re creepy and I didn’t even like to play with them as a kid.”

When staying in the same room as the dolls, Doty saw a small shadow moving underneath the door and, expecting to find the cat, she instead saw an empty room.

Kilimnik added: “When I get rid of the doll, the problem goes away.”

For folks looking to tap into the paranormal, the podcast pair recommends keeping an open mind, meditating and using a journal to track patterns. Also, don’t discount the young people in your life that say they’ve seen something strange.

“Children have abilities that we turn off as we begin to accept that the adults in our lives don’t see what we see,” Doty said. “Even the most sensitive people say that they can turn off [their otherworldly ability], and they generally do in their late teens or early twenties.”

If all else fails, Kilimnik added, “the easiest way to experience a haunting is to work or live in a haunted place because, eventually, you’re going to experience something.”

To celebrate spooky season all year, tune into the Homespun Haints podcast for more firsthand accounts of paranormal activity.