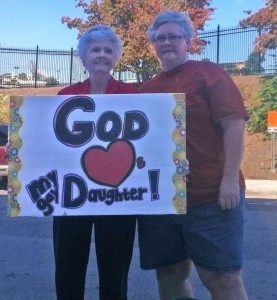 Yvonne Howell of Snellville and her daughter Dana Worsham, at a recent protest at Candler School of Theology, which Worsham attends.

The trip from Snellville to her daughter’s seminary in Atlanta covered 20 miles and half a lifetime for Yvonne Howell.

Now 77, Howell’s mindset transformed from a belief that her youngest child, Dana Worsham, faced possible damnation for being a lesbian. On Friday she lifted a sign proclaiming, “God loves my gay daughter!”

Acceptance and celebration was once impossible for Howell, a lifelong Southerner from Mobile, a former electrician’s wife who was raised in a conservative Christian denomination.

To come to a belief that was 180 degrees opposite, Howell needed half a lifetime of fretting, praying, denying, pleading, cajoling, and finally accepting a truth that isn’t explicitly, comfortably spelled out in Bible verse.

Her journey is one that her daughter and others hope that the Methodist church will follow. They reject the anti-homosexual stance of the denomination and those who lobby to keep it.

That’s why mother and daughter were among 30 protesters last week at Emory University’s Candler School of Theology. The seminary gave a significant award to an internationally-known alumnus, Rev. H. Eddie Fox, because of his support for Candler and global work. Some students and supporters pushed back because in 2008, Fox helped preserve church language that homosexuality is “incompatible with Christian teaching.” 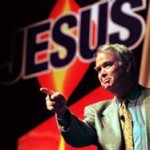 Beyond the seminary, the denominational divide potentially affects thousands of households in Atlanta and this state. The United Methodist church in north Georgia includes 930 churches, more than 1500 clergy and 360,000 congregants. Worldwide, the church counts 11 million members.

Methodists are not people who sit on the sidelines; a central tenet of their faith is putting faith and love into action.

That’s why Howell, who now attends a Presbyterian church, chanted with the protesters and raised her sign.

“I just can’t believe my Jesus would treat one of his people – one of my people – as some people treat them,” she said. “I just know that God doesn’t make mistakes.”

Through their major disagreements, what mother and daughter always have had in common is passion for what they believe is right.

Howell had three children. She always knew her youngest was different.

She recalled that when Dana was a toddler, she liked to play in the closet and try and put on her daddy’s ties. She preferred GI Joes over Barbies.  Later she grew interested in go-karts and softball. 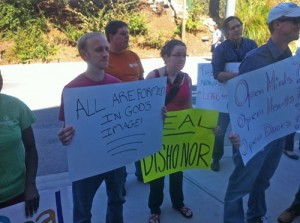 Students at Candler School of Theology and supporters recently protested the seminary giving a significant award to an internationally-known alumnus, Rev. H. Eddie Fox. Fox was honored for his support for Candler and global work, but protesters pushed back because in 2008 he helped preserve church language that homosexuality is “incompatible with Christian teaching.”

This kind of different wasn’t acceptable in the eyes of Howell’s church.

“I was raised a Baptist,” Howell said. “I have heard them talk about people like my daughter like they were lower than dirt. One preacher, he said in one sermon – I know he said it five or six times – ‘They have demons in them.’ ”

As a teenager in 1983, Worsham came of the closet.

Her mother was devastated. “I was like the walking dead back them,” Howell said.

She sought psychiatric help for her daughter, bought her “beautiful dresses” and encouraged her to seek out romantic male companions. (Worsham’s father didn’t react well either, but came to accepting her sooner than her mother. The couple divorced and he died in 2007.)

Howell pleaded with her daughter, asked her why she couldn’t be normal.

“She did all of the textbook things,” Worsham said. “She blamed herself. She blamed my dad. She blamed some of the friends I was hanging around with. She said I was mentally ill.”

“I thought I could change her,” Howell said.

It was a tough fight to keep up. As her daughter established herself as an adult, Howell alternated between judging her life and drifting out of it.

Meanwhile, Worsham sought to escape her ties to her mom. She went to West Georgia College and later the U.S. Marines. She served in Desert Storm in Iraq as a heavy equipment operator in 1991.

Worsham drifted away from the church too. “I didn’t think there was a place for me at God’s table,” she said.

But two events sparked a turnaround in the triangle between mother, daughter and the church.

Second, a family spat in spring 1998 moved Howell to redefine her loyalty to her daughter.

Worsham told family members she was bringing her then-girlfriend and her girlfriend’s mother home with her for Labor Day. Worsham’s sister-in-law sent regrets that her family would not attend.

“We don’t want our kids around you and your girlfriend,” Worsham recalled her saying.

In that conflict, Howell realized which side she was on. She was over fighting. Life was too short to keep judging her daughter, who had shown courage to break family expectations and invite her new family into the holiday.

The rejection of her daughter “hurt me so bad,” Howell recalled.

Her reaction to her daughter-in-law: “I told her off.” She no longer puts up with that kind of talk from anybody. 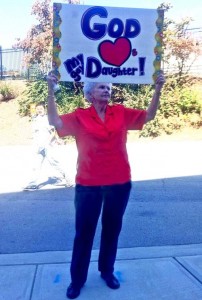 Because of religious beliefs, Yvonne Howell rejected her lesbian daughter, then journeyed to acceptance. She seeks opportunities to defend her daughter, including a recent protest at Candler School of Theology.

Howell also reconciled with her daughter.

“I put her through a lot. I was ignorant,” Howell said. “I have apologized for all that.”

Worsham said her mother has challenged bias against gays and lesbians long before Friday’s protest.

“My mother has gotten into verbal confrontations about my lifestyle and doesn’t mind getting into somebody’s behind. In fact she’ll bring up the subject if she has an idea somebody feels differently,” Worsham said. “She tell ‘em in a heartbeat I was born that way.”

For Howell, love in action means taking a stand and always being ready to move if the ground shifts.

“I am going to a Presbyterian church. The preacher has never said anything ugly about gay people,” she said. “If he does, I’ll just go out and never come back.”