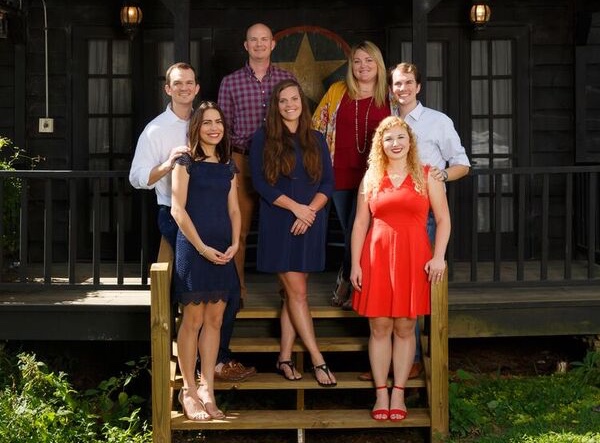 Ray C. Anderson, a corporate environmental evangelist, died more than seven years ago. But his legacy lives on – as strong as ever.

The two major vehicles for Anderson’s continued influence over corporate America include the company he founded – Interface Inc. (Nasdaq: TILE); and his philanthropy – the Ray C. Anderson Foundation, a family endeavor that includes his two daughters and his five grandchildren. 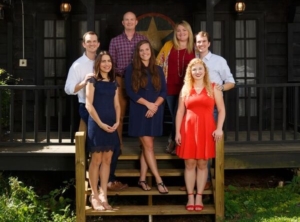 During recent interviews with top executives and with his daughters and grandchildren, it’s obvious everyone feels the responsibility to spread Anderson’s messages of saving our planet before it’s too late.

“We felt that daddy didn’t get to finish what he started,” said Mary Anne Lanier, who chairs the Foundation and works alongside her sister – Harriett Langford, a fellow trustee who also chairs one of the Foundation’s initiatives – The Ray.

Anderson died on Aug. 8, 2011 – 20 months after being diagnosed with cancer – without leaving his family a roadmap on how he wanted them to continue his legacy.

“My mother and my aunt were shocked,” said John Lanier, who is now executive director of Ray C. Anderson Foundation, founded by his grandfather while he was alive. “The Foundation was the beneficiary of his estate, and he left no instructions on what to do. Overnight they became responsible for his foundation, which is now worth about $50 million. It was a total blank slate. It was easy for us to figure out that our job was to advance his legacy.” 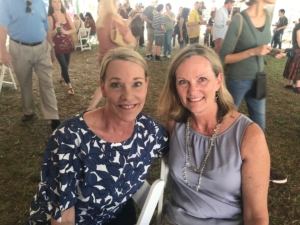 Ray Anderson’s two daughters: Harriett Langford and Mary Anne Lanier. Mary Anne Lanier is chair and president of the Ray Anderson Foundation. Harriett Langford is on the board of trustees, and she also serves as president of “The Ray” – an 18-mile corridor on the northwest section of I-85 that is looking to transform transportation and the communities around the highway (Photo by Maria Saporta)

Over at Interface, Anderson’s presence still looms large over one of the world’s largest manufacturers of modular carpet and flooring materials. Anderson had ambitious environmental goals for Interface, including becoming carbon neutral by 2020. The company reached that goal two years early.

Jay Gould became CEO of Interface in 2017, succeeding Daniel Hendrix, who followed Anderson in that role. Hendrix continues to serve as chairman of Interface’s board.

“Ray had a huge influence on my life, and I never met him,” Gould said. As former chief innovation officer of The Coca-Cola Co. in 2001, Doug Daft asked a small group of executives to study “purpose driven companies” to get ideas for Coca-Cola’s future. “The first company we looked at was Interface.”

When Hendrix was looking for a successor, the question he had to answer was whether he could “turn over the keys of Ray’s company” to that individual. 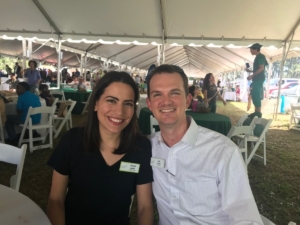 Chantel and John Lanier: Chantel is the current chair of the “Next Gen” committee of the Ray Anderson Foundation – which includes all of Ray’s grandchildren and their significant others – looking to groom them as philanthropists. John Lanier is executive director of the Ray Anderson Foundation and handles all of its the day-to-day responsibilities (Photo by Maria Saporta)

“Ray is throughout the whole company,” Hendrix said . “Ray is the spirit of the company – it’s the culture that he set.”

Under Gould and Hendrix, Interface continues to push the sustainability envelope – most recently by moving its headquarters from Vinings to Midtown across the street from the Arts Center MARTA station to encourage the use of transit by its team members and visitors.

“I start almost every presentation with a photo of Ray,” Gould said.

On one of the company’s interior walls, there’s a quote by Anderson: “Brighten the corner of where you are…. and what if everybody did it?”

It’s a message his children, grandchildren and their significant others have taken that message to heart.

After Ray Anderson died, Mary Anne said that she and her sister “pouted for about six months” before bringing together a “dream team” of environmental experts to help them guide the foundation.

“We didn’t have the opportunity to practice philanthropy with our dad,” Mary Anne said. “We didn’t want our kids to have that experience.”

So they created the “Next Gen” committee of the Foundation to help the children practice philanthropy. The first year – 2014, they were asked to give away $50,000. Now the “Next Gen” committee is giving away $100,000 a year. They will award a $90,000 grant to a nonprofit involved with climate change; and the remaining $10,000 is being split among the five grandchildren (and their significant others), who will each give $2,000 to a nonprofit of their choice. 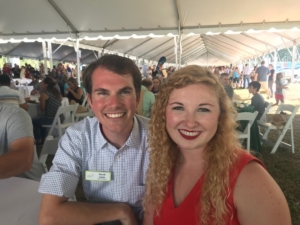 Patrick Lanier with his fiancé Stephanie Gorensen (wedding is planned for Dec. 29, 2018). Patrick and Stephanie met when they were both working for Home Depot’s corporate offices. They have both since left the company. Patrick went back to school to become a high school history teacher – working in Gwinnett. Stephanie is working with Ballard Designs. (Photo by Maria Saporta)

The rules were simple. They needed to be thoughtful about their philanthropy and not just give it to their universities or churches.

“That would be too easy,” said Mary Anne, who told them: “You have to find organizations and opportunities that move the sustainability needle forward. And they had to agree.”

The Next Gen committee includes John and Chantel Lanier, who is this year’s chair of the committee; Jay and Whitney Lanier, who live in Ashville, N.C.; Patrick Lanier, who is engaged to Stephanie Sorensen; Melissa Langford Heflin of LaGrange; and McCall Langford, who currently lives in Denver.

“They are very thoughtful, and they work very well together,” Harriett said. “They will be better prepared than my sister and I were. They all have good hearts. Our father lives on through their generation.”

Each of the committee members bring special talents. For example, John Lanier, 32, was a tax attorney before joining the Foundation full-time. Chantel studied nonprofit management, and she longed to be involved with a philanthropic organization.

“We have so many different ideas and different backgrounds,” Chantel said. “We are an experimental lab. All of the different views makes for really great discussion.” 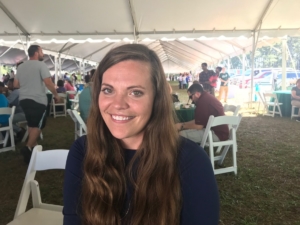 Grand-daughter McCall Langford is following the environmental path of Ray Anderson. She is getting her Master’s degree in biomimicry at Arizona State University (she lives in Denver but is taking classes online. She learned the term biomimicry from Ray Anderson. It’s a science that looks at the natural world for modern solutions. For example, velcro is biomimicry. The inventor of velcro got the idea when he was walking in the woods and got burrs on his clothes. He mimicked the design of the burrs and created velcro. (Photo by Maria Saporta)

McCall Langford, 27, has embraced her grandfather’s commitment to sustainability. She is working to get a master’s degree in biomimicry from Arizona State University. Biomimicry is the study of nature and how its magic can be translated to the human environment.

“Every time I knew I was going to see my granddad, I would pull out my science books,” McCall said. “I remember sitting at the table where he was explaining what biomimicry meant. He sparked that passion every time I went to see him.”

The Ray C. Anderson Foundation gives away about $2.5 million annually, and it provides regular funding to three initiatives: The Ray C. Anderson Center for Sustainable Business at Georgia Tech; the Biomimicry Institute – a design discipline that looks to nature for ideas on how to solve modern societal problems; and “The Ray” – an 18-mile corridor on the northwest section of I-85 that is looking to transform transportation and the communities along the highway.

Every year, the foundation also puts on a RayDay celebration at Serenbe – with booths and displays from dozens of organizations, which John Lanier describes as the Foundation’s “gift to the environmental community.”

The “Next Gen” committee decided it would invest its major annual grant to an organization involved with climate change. There are four nonprofit finalists, and the committee will have to agree on which one will get their grant. 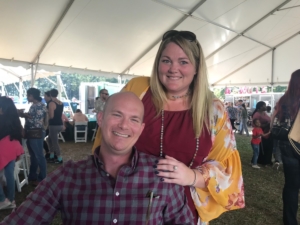 Jay Lanier with his first cousin – Melissa Langford Heflin. Jay Lanier is the oldest of Ray Anderson’s grand-children, and he has been working for Interface for seven years – currently as a salesman in Ashville, N.C. The last time he saw his grandfather, he told him he had accepted an offer with Interface, which brought tears to Ray Anderson’s eyes. His wife – Whitney Lanier – did not attend RayDay because she was at a wedding. Melissa Langford-Heflin is a full-time mother living in LaGrange, the home of the Interface manufacturing plant. (Photo by Maria Saporta)

“It’s an opportunity to get closer with my family members. We all work really well together,” McCall said. “Climate change is what’s most critical right now, and it’s going to make or break the survival of the human race. There are not enough industries that have realized they can profit by doing the right thing.”

Patrick Lanier, 27, and his fiancé, Stephanie Sorensen, met when they were both working at the Home Depot’s corporate office. Patrick then decided to follow his passion, becoming a history teacher at a Gwinnett High School while Stephanie is now working with Ballard Designs.

“Next Gen is helping both of us get an appreciation for philanthropy,” Patrick said. “There is so much responsibility to this.”

The oldest of the grandchildren is Jay Lanier, 35, who is literally walking in Ray Anderson’s shoes. He is living in Ashville, N.C. working as a salesman for Interface.

“I’ve been at Interface for seven years,” Jay Lanier said. “The last time I talked to my grandfather, it was to tell him that I had accepted a position at Interface. There were tears in his eyes.” 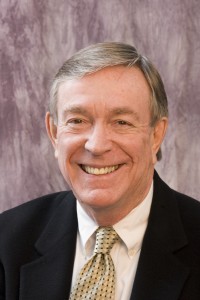 His work with the Foundation’s Next Gen committee is an opportunity for the grandchildren to take leadership roles in the environmental field.

“It would have been foolish to pass up the opportunity to address the challenges we face,” Jay said.

Anderson’s daughters also know they are helping nurture philanthropists – something their father did get to do with them.

“I think he thought he had a lot more time,” Harriett said.

Then Mary Anne chimed in: “He must have really trusted us by not laying out a roadmap.”

Both sisters are giving their children and their significant others will become philanthropists and carry on Ray Anderson’s legacy.

“There’s no conflict because there’s no ego,” John Lanier said. “What the board has told me is that if ‘Next Gen’ blows them away, they can’t wait to give us more money to give away.”

And so Ray Anderson lives on.