By Maria Saporta
Published in the Atlanta Business Chronicle on November 21, 2014

In a major new expansion, Fernbank Museum of Natural History will be opening up its doors to embrace the 75 acres of woods in its backyard for visitors to enjoy a unique outdoor experience.

Fernbank, which opened in October 1992, has launched a $20 million campaign to expand and re-orient the museum so that visitors can fully experience 10 acres of mature woodlands and the 65-acre Fernbank Forest, the largest old-growth urban Piedmont forest in the country.

It will be the largest single investment in the museum since it opened 22 years ago. 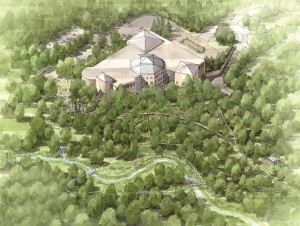 Bird’s eye view of the campus (Renderings provided by Fernbank)

In many ways, it will bring Fernbank full circle to the original vision of Emily Harrison, who saw Fernbank as a “School in the Woods” more than a century ago.

“Fernbank is the only nature museum in the country connected to a major woodlands and an old growth forest,” said Susan Neugent, president and CEO of Fernbank Museum. “This is the most significant development at Fernbank since the museum opened, and we can’t wait for our visitors to experience this fun and invigorating encounter with nature.”

Although Neugent said it was premature to talk about the status of the $20 million campaign, she did say that there has been 100 percent participation from Fernbank’s board of trustees.

Classroom in the woods

Speaking of the Woodruff Foundation trustees, Neugent said: “Their generosity to Fernbank goes far back. They’ve been anxious to see us embrace the outdoors.”

The expansion will enable the museum to fully take advantage of its unique location as an urban natural history museum within a forest by letting visitors experience nature in an outdoor environment rather than inside a museum building.

The outdoor expansion will offer experiences for all ages enabling visitors to explore a variety of landscapes along with a five-story change in elevation—from dramatic vantage points high in the trees to footpaths winding through rugged, ever-changing terrain.

“This is a rare opportunity to connect our visitors with a truly authentic nature experience, right here inside the city,” Neugent said. “We can’t wait for our visitors to experience this fun and invigorating encounter with nature.”

When the Fernbank Museum was built 22 years ago, it was located on land that used to be residences along Ponce de Leon Avenue and Clifton Road. The woodlands — which do include a number of 100-year-old trees — are basically the former backyards of those former homes, and they are adjacent to Fernbank Forest. But the land cannot be considered to have been undisturbed like the old-growth forest.

Neugent said that Fernbank went through great pains to make sure the old-growth forest would not be impacted by the expansion or during construction.

The museum actually is doing the opposite by restoring the forest, stabilizing the trails and helping with pond restoration.

It is currently leading a research-based restoration that includes removal of more than 45 harmful invasive species and restoration of many native species that have largely disappeared.

“We understand at the time Emily Harrison had her home here, there were 21 different species of ferns in the forest. and today there are only nine species,” Neugent said. “So it’s our plan to return the full composite of ferns along the northern bank of Fernbank Creek.”

It was because of all the ferns along the bank of the creek that led Emily Harrison to name the forest and her homestead — Fernbank. She founded the organization — Fernbank Inc. — in 1939 to preserve the forest.

Fernbank is one of the oldest conservation nonprofit institutions in the country following American Forest, the Sierra Club and the Audubon Society.

Asked about whether trees in the woodlands and Fernbank Forest would be saved, Neugent said that they had conducted a thorough tree inventory. A total of 479 trees were counted of which six were declared too sick or in poor condition. Six that had been planted recently along a roundabout will be removed. That will leave only six trees that will need to be cut down for the expansion.

“We have taken great pains to place the walkways between trees,” Neugent said. “We have made a great effort to preserve as many trees as possible.”

Part of the $20 million Fernbank campaign will include expanded access to the forest, and Neugent said that is expected to occur when the outdoor experiences will be unveiled to the public. Fernbank’s outdoor expansion will be included with the admission to the museum at no extra charge, and it will be free for members.