In two of the state’s most populous counties — Fulton and DeKalb — 11.3 percent and 10.5 percent of residents, respectively, are food insecure, meaning they lack consistent access to food. The issue is persistent in urban and rural areas throughout the state, according to 2019 data from Feeding America. However, local food cooperatives are looking to change that.

Rather than waiting on a corporate solution, these entities are able to address the community’s needs in real time. A cooperative business model typically allows room for many owners and members with voting power, and provides access to materials at an affordable rate.

Urban Recipe provides free food to low-income residents, following the widely-recognized seven principles for co-ops. The organization operates as an umbrella for eight co-ops that serve Atlanta and the metro area.

To receive the food, folks must go through orientation and submit a statement of need. Once that is completed, they are automatically a member. Members aren’t owners because the Urban Recipe model is intentionally free-of-charge, but they can vote and serve on a members-only committee. 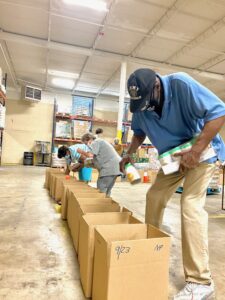 At Urban Recipe, “everybody has a part they play,” one member said in a video. (Photo courtesy of Urban Recipe)

Members are instrumental in packaging and distributing the supplies every two weeks. The biweekly group effort helps foster a connection that goes deeper than just the food.

“What we oftentimes see is people who go to a pantry in need of emergency food aid,” Lewis said. “It is a good response in a person’s state of crisis, but if they’re in a place that they need more long term sustained support, we’re able to really make sure that worry that initially drove them to going to a food pantry, now they not only have enough food, but they’re going to have a group of people to get to know… and they develop real relationships.”

One member became involved with Urban Recipe when she had 11 people in her home to feed. Without the co-op, she would be in the hospital from stress, she said in a video on their website.

“Everything is real personal there; it’s like having an extended family,” the member, who chose to remain anonymous, said. “It’s always a blessing to go to the co-op because you’re always getting something you need extra besides the food. You’re going to get some spiritual food; you’re going to get a little love.”

The Atlanta Community Food Bank donates a majority of the food, and the amount of food that each member receives is based on the size of their family. This personal touch allows Urban Recipe to distribute five to seven times more food to their members compared to food pantry recipients, according to Lewis.

The folks with Market 166 are also considering an alternate food source in the East Point area. Market 166 is a grocery and kitchen co-op in the beginning phases of potentially becoming Atlanta’s second grocery co-op, alongside the well-established Sevananda. 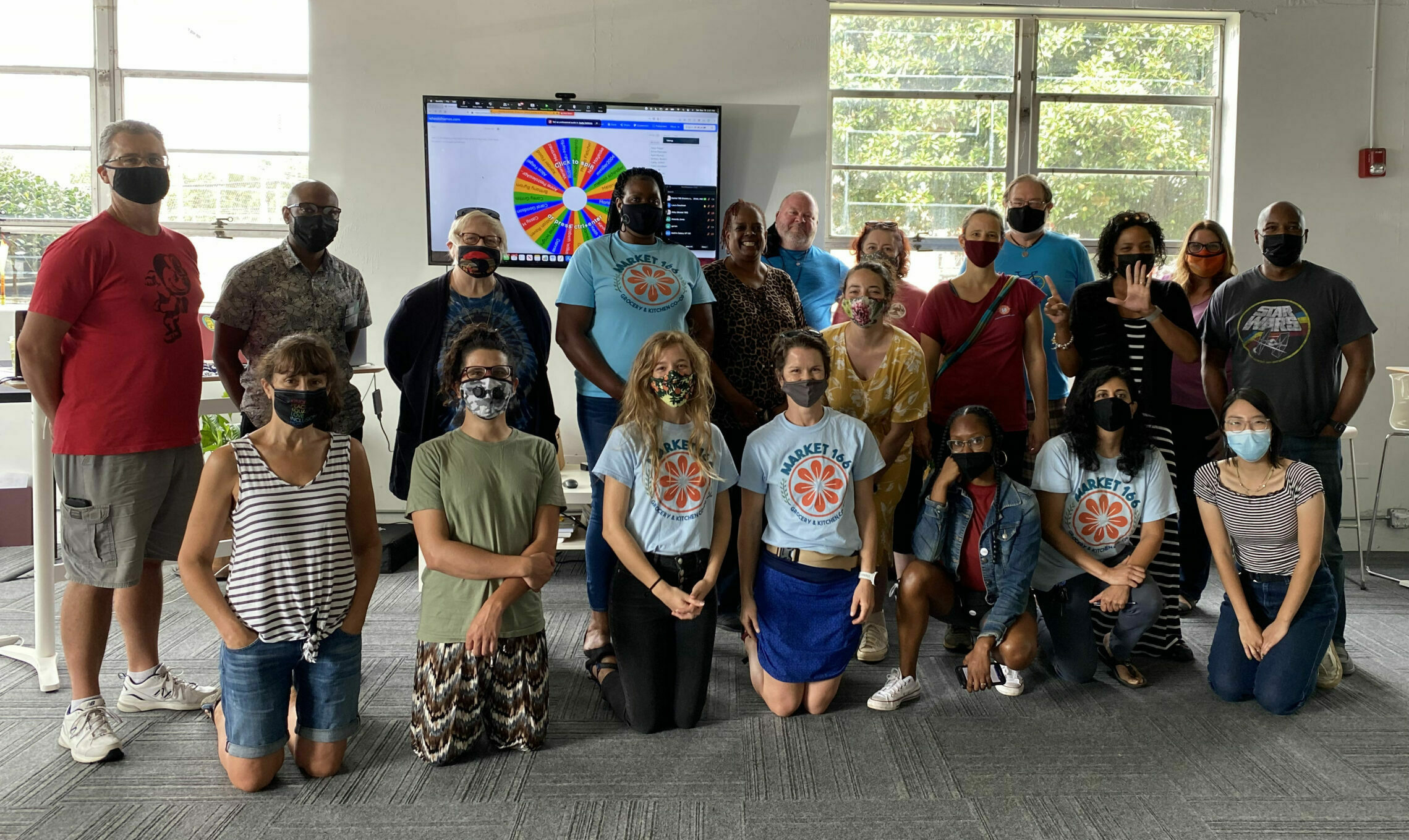 Some of the Market 166 team gathered last month to talk strategy. The grocery co-op is still accepting new owners. (Photo courtesy of Market 166)

The co-op has about 265 ownership shares, with owners counted by the household so everyone can receive the benefits. They’re nearing the 300 mark, where the team will create a business plan and market analysis, and they’ll choose a physical location once reaching about 450 owners.

Market 166 Board Chair Permeil Dass has been involved since its inception in 2018, and as a resident of East Point, she envisions better food options for her community.

“If you went into the grocery stores, it was not a community feel. It was very clear that it was an outside corporate group that is [focused on] profits over people,” Dass said. “We don’t believe organic should just be for a certain class of people. Everyone should be able to have access to it at an affordable price on a transit line or something that people can get to easily.”

Besides providing access to affordable fresh food, community involvement is another main priority for the organization. The team’s plans include a commercial kitchen, open to small local businesses and an event space.

“The concern for community and centering on community is huge,” Vice-Chair Abby Tennenbaum said. “And I think that the cooperative provides an opportunity for people to meaningfully participate in helping to create a community that we want to see and build something that our community is currently lacking.

“Because it’s a community-owned organization, all of the profits from whatever grocery business we run are either returned to our owners or reinvested in the community. It stays right here in southwest Atlanta,” Flood said.

There are also co-ops that support the starting point of our food systems — agriculture. The West Georgia Farmers Cooperative (WGFC), founded in 1966, is a co-op that buys food from local farmers and combines the goods to sell to large buyers. This system allows folks with smaller farms to accommodate more business.

The co-op also aids in buying farming supplies, which are more affordable when purchased in bulk.

Eric Simpson became a member in 2011 and now serves on the board of directors. Simpson has a small farm called New Eden Ecosystem, consisting of vegetables and farm animals like chicken and sheep.

Simpson appreciates the co-op system because of its “democratic model.”

“I love the collectivity of the model because it allows groups with modest resources to aggregate and to expand much quicker than an individual entity would be able to with limited resources,” Simpson said. “[Because of WGFC] I’ve been able to meet people and develop some other skills such as consultations and grant writings.”

These groups are working to create a food system that works for their community, rather than the other way around.

What do you think about the co-op model? Do you have other ideas for increasing access to affordable food? Let us know what you think below.