By Hannah Palmer, Coordinator of Finding the Flint

Last month, I burst into applause when the Board of the Clayton County Water Authority (CCWA) voted (via Zoom, of course) to approve the purchase of 12 acres of wetlands along Mud Creek. The Finding the Flint team, scattered in home offices and in vehicles around Atlanta, texted each other hoorays and high fives.

It’s a small piece of property, in terms of watershed conservation, on an unknown tributary of the Flint River. But we cheered because this obscure little pocket of greenspace represents the first land acquisition initiated by Finding the Flint, a small step towards the big dreams we have for the Atlanta airport area. 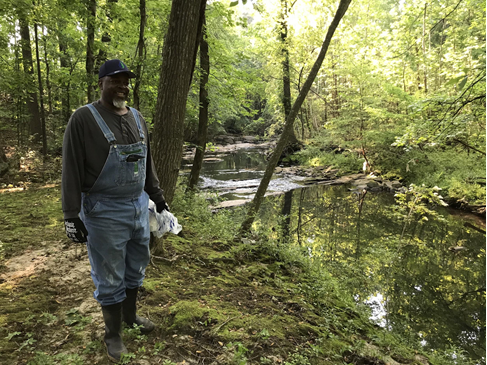 Kevin Osbey, Stormwater Program Director for Clayton County Water Authority, walks the walk at a clean up event on the Flint River headwaters, inside a secure area owned by the airport. Photo: Hannah Palmer

The vote was a bit of a formality, one step in a long and technical process that started a decade ago when CCWA identified Mud Creek, long degraded by stormwater runoff, as a priority in its  Upper Flint Watershed Management Plan. Kevin Osbey, Stormwater Program Director, made the recommendation to the board explaining that the Authority owns a sewer line on the property, and that existing funds from stormwater utility fees would support the acquisition.

“This acquisition allows CCWA and the Clayton County community in general, an opportunity to not only look at heavily impacted streams and tributaries, but possibly move forward to restore these water bodies and surrounding wetland areas,” Osbey told me. “Being able to reduce potential development in these areas should start us down the road to improving water quality while possibly creating an amenity for the public in the future.”

The last part made me cheer— “creating an amenity for the public”—because it would be a game changer for this long overlooked corner of Atlanta. Finally, I thought, a little respect for Mud Creek!

Where is Mud Creek? 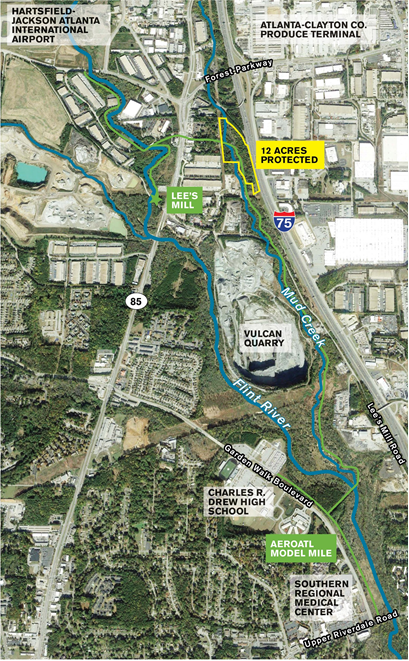 Obscured by I-75, Mud Creek flows 4 miles through a forbidding landscape dominated by industrial uses. The creek could provide a peaceful, green connection between existing schools, parks, and neighborhood destinations.

Look at a satellite view of the area south of Hartsfield-Jackson Atlanta International Airport, and you’ll see a swath of bright green to the east of I-75, winding its way through a landscape of gray. That’s the Flint River and its tributary Mud Creek, hidden in the trees.

The gray area is not just the airport’s pavement, but a vast industrial district encompassing the State Farmers Market, quarries, warehouses, manufacturing plants and other large-scale intensive land uses that gradually replaced neighborhoods and farmland around the edges of the airport. This ad hoc district in unincorporated Clayton County is dominated by impervious parking lots and rooftops, and all of its stormwater flows into those thin green swaths.

Mud Creek first sees daylight in the tangled intersection of I-285 and I-75, and flows south beside the interstate for four miles, completely inaccessible and invisible. While the Finding the Flint project has focused on revealing and restoring the main stem of the Flint River, which famously flows in a pipe underneath the world’s busiest airport, we’ve also been studying its tributaries for conservation opportunities and trail connections. Near the airport, Sullivan Creek and Mud Creek are just as big as the Flint River, and just as impacted by pollution, stormwater runoff and erosion.

Back in January 2017, when Ryan Gravel and I first started on the vision plan that would become Finding the Flint, we mucked along the banks of Mud Creek between Lee’s Mill Road and I-75. The winter forest revealed the washed up litter and clawed-out banks of a wild urban stream that meandered into sandy channels across a large wetland area.

We could see how these wetlands functioned as sponges in a mostly asphalt landscape. But we also saw the opportunity to rethink these marginalized greenspaces as nature preserves, to open them up to the public and create a sense of place in this “no man’s land” by the airport. Why not put trails on top of the sewer easements running alongside the creek, similar to those in more residential areas? It could be beautiful and functional, Georgia’s first “eco-industrial district.”

Not long after that, a commercial property owner heard about Finding the Flint and contacted The Conservation Fund about selling some land along Mud Creek. It was mostly floodplain, squeezed between a power line easement and I-75.

Our team visited the site on a sweltering summer morning, joined by Kevin Osbey and Mike Thomas, then General Manager of CCWA, and Stephanie Berens of Clayton County Parks. We parked on the edge of a tiny neighborhood that somehow survived the surrounding industrial encroachment and, armed with DEET and yellow vests, followed some fresh ATV trails into a marshy forest, teeming with wildlife. Down by the stream we spotted a brown eastern watersnake sunning on a rock and the ambitious chewings of a beaver colony.

The creek itself was clear and wide, running quietly through deep banks tangled with privet and cottonwood. A surprisingly pleasant patch of deciduous forest climbed a slope up to the interstate. With the woods shielding us from the sight and sound of highway traffic, it felt like a secret garden. I posted Instagrams of this lush scene and instantly comments appeared: Where is this place? How can I get there?

Like so many Atlanta creeks, you’ve driven past it a thousand times, but you can’t get there. Not yet. But we’re working on it. 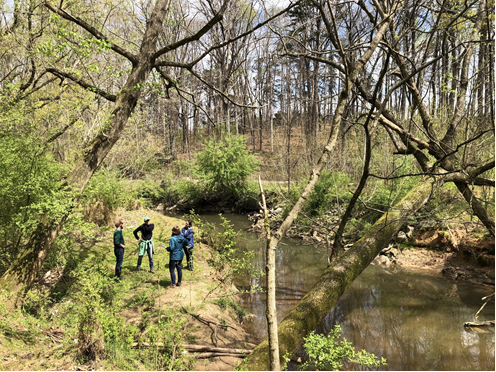 The Finding the Flint team, including partners from American Rivers, The Conservation Fund, and the Atlanta Regional Commission, visit Mud Creek in 2019. Photo: Stacy Funderburke

A Greener Vision for the Southside

After our visit, we started to think about this site as a potential trailhead and outlined the larger trail connections and recreational access opportunities for this area. 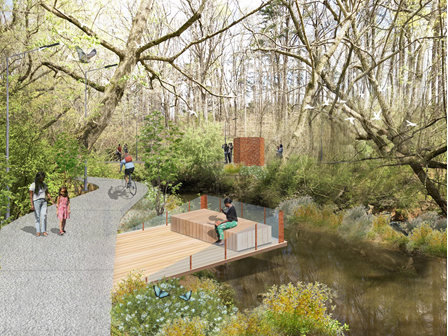 Preliminary concept rendering for a trailhead along Mud Creek

While this scrap of floodplain may be the first land purchase initiated by Finding the Flint, such acquisitions are not new to Clayton County Water Authority. The Flint flows across the entire length of the county, nearly 20 miles from the airport to Hampton, and provides the county’s primary water supply. For decades, CCWA has been working proactively with families and property owners to permanently protect lands along the river corridor. It’s all about investing money upstream, so they don’t have to spend it downstream.

As CCWA focuses on infrastructure protection and streambank stabilization, we are looking for funding to incorporate enhanced stream restoration and trails into their plans. They have a successful history of collaboration with Clayton County Parks and Greenspace, developing multi-use trails along other Flint tributaries. As a kid growing up in Clayton County, I never heard the names of the creeks in my neighborhood or their connection to the Flint watershed. Thanks to the Jester’s Creek Trail and the Morrow Pathway along Angel Creek, my children’s generation will know the names and value of these tributaries.

Beyond this 12-acre property, our team is studying more than 90 acres of floodplain along Mud Creek, looking for opportunities to the north for restoration and to the south for trail connectivity. It’s a curious landscape that includes what local explorers call “the boat graveyard,” the capsized detritus of Forest Park boat dealer Shaddix Marine and the remarkable ruins of a pre-Civil war era gristmill on the Flint River. So many stories are hidden along the upper Flint headwaters. 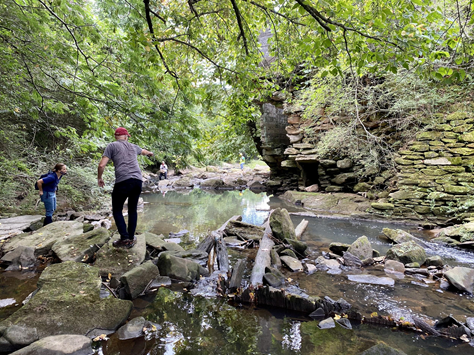 Earlier this month, we visited the ruins of a pre-Civil war era gristmill on the Flint River, half a mile from Mud Creek. Even those of us who have been exploring this area for years were amazed to see so much of the structure still standing. Photo: Stacy Funderburke

For example, I have written extensively about Mountain View, my hometown that was essentially erased by airport expansion. In my research about this lost city, I interviewed an 80-year-old neighbor who recalled playing in the local “branch” with the kids from Plunkett Town. Together, the children, black and white, built a dam and a swimming hole.

This nameless creek, now hidden under a parking lot, would’ve been my first “watershed address,” too. When I tried to find it on a map, I realized it led to Mud Creek. I can’t help but feel personally connected to the humble origins of Mud Creek and sense how restoring the name and health to these places is part of repairing the damage done to airport area communities.

Finding the Flint is a project of American Rivers, the Atlanta Regional Commission, and The Conservation Fund. Support this exciting initiative by reaching out here. Learn more and take a virtual tour of the headwaters at www.findingtheflint.org. Get the latest updates and share your Flint River stories with us on Facebook/Instagram @findingtheflint. 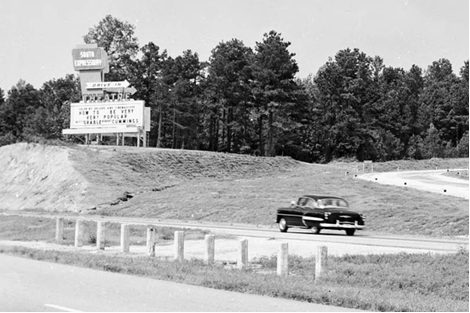 This creekfront property wasn’t always “undevelopable.” The old Atlanta & Florida Railroad (abandoned 1938) travelled through the site and later the South Expressway Drive-In Theater (circa 1955-1985) owned the property. As I-75 and the airport expanded, so did industrial developments, shrinking the forested area along Mud Creek to a flashy bog. Photo: Georgia State University Library 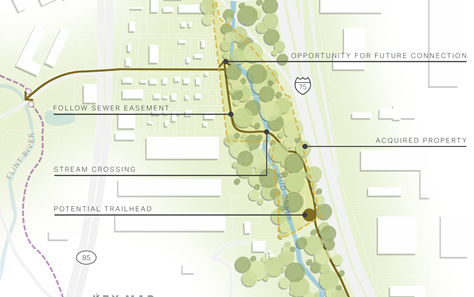 Preliminary site plan for a trail along Mud Creek. 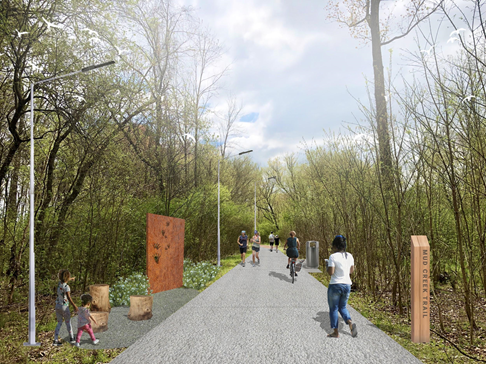 An adjacent Clayton County Water Authority sewer easement runs parallel to the creek, offering a clear path for recreational trails that could link into the larger AeroATL trail network being developed by the Aerotropolis Alliance. Photo: Stacy Funderburke