The best holiday gift this year may be a common object refashioned through the creative eye of an artist like Dominique Lacey, and her re-born mother’s heart.

She and more than 100 edgy local artists will sell their unique creations this weekend at the Indie Craft Experience – ICE – near downtown Atlanta. 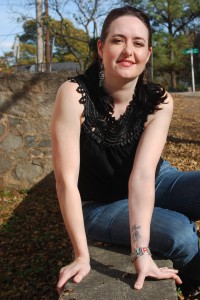 Many use recycled materials simply to be green, but Lacey’s art represents her personal renaissance after unnamable grief.

These are the results of being forced to re-imagine a new world for herself during the 2007 winter holidays, after her first child was born.

Lacey was then a middle school teacher who enjoyed quilting, embroidery and keeping her hands busy. When she got pregnant, and high blood pressure put her on bed rest, she quickly got bored simply watching birds come to a feeder outside her window.

To take her mind off waiting, her husband Jacob – a welder – suggested she try to bend metal. “License plates reminded me of my favorite printed fabrics I quilted with,” she said. 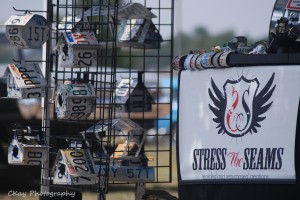 Lacey's birdhouses and bangles are sold through her Etsy site called Stress the Seams, which will set up at the Indie Craft Experience this weekend.

When a squirrel destroyed her birdfeeder, Lacey “quilted” the license plates to make a birdfeeder. A niche was born.

Meanwhile, doctors could not pinpoint the source of her blood pressure problems, and told her the baby would likely never manage to be born. In proceeding, Lacey could be putting her own life at risk.

They named her Claire, because they could see clearly that, after defying so many obstacles, she was meant to be in the world. Abbigail, her middle name, means “rejoicing,” for she was the first grandchild for both sides of the family. 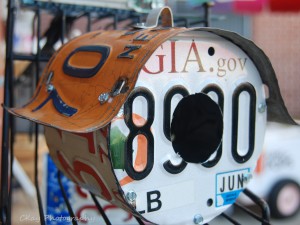 Birdhouses are the first item Dominique Lacey made from license plates, and her designs have evolved as she has recovered from loss.

“The teacher in me knew that I would have to do all I could for my child, so I knew right then I would never get to have a ‘normal’ job again,” Lacey said. “For the 17 days she was with me, I focused on only her.”

The shock of losing Claire suspended all normality. There was no bending the fact that she was gone.

“My world as I knew it had ended, yet the calendar and clock kept going, other people still laughed, and holidays were still expected to be full of joy,” Lacey said.

Can parents possibly repurpose the loss of a child? What could they reach for and hold on to after such a tragedy?

“It would be a long time before I could invest myself in other people’s children again,” Lacey said. “So I found that I needed my outlet of crafting even more so that I could feel ‘normal.’”

Picking up her mallet, shears, drill and sander, Lacey returned to her art, this time to create a new self. 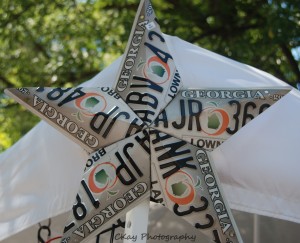 “Friends and relatives quickly noticed how much joy it was bringing both myself and my husband to have me crafting,” she said. “They started pushing me to share my work.”

Etsy.com offered Lacey a gentle link back to the world.

As the eBay of handcrafters, Etsy “allowed me to share [my art] without actually having to interact face to face [with anyone] and risk the pain of encountering something as simple as a cute pregnant lady or a giggling baby,” Lacey said. “Etsy also allowed others who had similar experiences to find me, support me, and help me find my way back out.”

She expanded her artwork, from birdhouses to birdchurches, to inlayed belt buckles and key chains with peaches snipped out of Georgia plates. Her work is also carried by the Re-Inspiration Store, a retail shop in Poncey Highland that specializes in “upcycled” gifts. 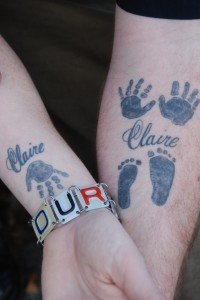 Dominique Lacey (left) and her husband have tattoos celebrating the short life of their prematurely-born daughter Claire Abbigail in 2007. Lacey says, "I have her actual size hand print, which is only a little over an inch wide, tattooed on my left wrist. I like to say she guides my every action, and that's the mark she left for others to see what I know in my heart."

“When someone else wants to own something you made to express yourself, because it brings them as much joy as it brought you to make it, then you smile,” Lacey said. “Not just on your face, but in your heart. And that’s something I never thought I’d do after Claire.”

“The License Plate Lady,” as she is known, will set up this weekend just west of Turner Field, at Ambient Plus Studio. As told in the documentary “Handmade Nation,” this culture gave rise to retro-modern designs popularized by Target.

At ICE, shoppers can return to the past, when art was made one piece at a time.

“ICE is not the place for your traditional meat and cheese basket,” Lacey said. “It’s the place to find that zombie nutcracker that will complete your mother-in-law’s nutcracker collection on the mantle…. There’s definitely something for everyone at ICE, and that something will be something you’ve never seen before.”

The date is significant for Lacey, a fundraiser for the March of Dimes, which designates November as Prematurity Awareness Month.

“A large part of Claire’s message to me was that the world really doesn’t revolve around me, and that it’s my job to leave it better than I found it,” Lacey, 30, said. “Part of that is through reinvention, reuse, and recycling.” 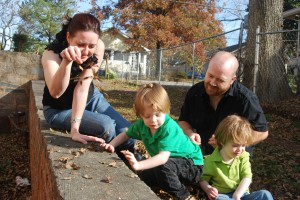 Micah Allen Lacey and Nathan O’Dean Lacey were born at 34 weeks, just shy of a year after Claire’s death, and partly because of her sacrifice.

“Because of her, we discovered that I have a clotting disorder,” Lacey said. “We could take precautions and managed to become pregnant again, something that more than one doctor warned me might never happen.”

They will turn a precocious 3 next month, already knowing the alphabet. As soon as they could sit up, their mom pointed to the letters on the license plates, and what was old continued transforming the new.