Finding the truth about Georgia’s own baseball slugger — Rudy York

Even after the Atlanta Braves season ended like a pileup on the Downtown Connector, hardcore baseball fans in Atlanta still care about this World Series.

Not only that, they care enough to preserve and deepen our knowledge of the personalities that popularized baseball.

One devotee even spent a decade piecing together a more complete picture of a misunderstood, part-Cherokee slugger from Georgia named Rudy York.

The detective work began with a tender story of brokenness between a father and son. This digging revealed how stereotyping separates us from the truth.

York’s story – the legend and the newer reality – came up last week as a handful of baseball faithful gathered at Manuel’s Tavern.

The second game of the World Series between the St. Louis Cardinals and Texas Rangers was on TV, but these members of the Society for American Baseball Research (SABR) did not hang on every pitch.

They take a much longer view of the national pastime, a lens familiar with obscure names like Rudy York’s. 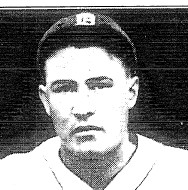 Rudy York, a major league slugger from Georgia who fought ethnic stereotyping in the 1930s and 1940s

Misunderstood is the theme here. Nationally, the 6,000 SABR members fight a stereotype as the Trekkies of baseball, the stat-heads who concoct spreadsheets and algorithms to compare, for instance, performances from different decades.

”We have a deep love of the history of the game and many of us are involved in our own research,” Sloope said. “Some people are rabid about the history of baseball as a hobby.”

That would include him. Fifteen years ago, Sloope volunteered with other SABR members to help develop the Baseball Index, a free bibliographic resource for baseball research. Sloope was cataloging relevant stories in Sport magazine from 1954 when a column caught his eye.

“A Letter to My Son,” was told in York’s voice, through the pen of Atlanta Journal Sports editor Furman Bisher. York addressed his regrets about drinking and other downfalls to his son Joe, who played baseball for Cartersville High School, 40 miles northwest of Atlanta.

“Anytime an Indian puts on a baseball uniform, he becomes about six times as much of a character as any other player,” York said in the column.

Sloope’s interest piqued. A lifelong baseball fan with a master’s degree in political science and job at Kennesaw State, Sloope lives in Cartersville.

“One of those serendipity things,” he called his start of resurrecting Preston Rudolph York.

Rudy York is the answer to a trivia question: who broke Babe Ruth’s record for most home runs in a calendar month? York belted 18 in August 1937, his rookie season, a record which stood until Sammy Sosa hit 20 in June 1998.

But who was York really, beyond the baseball numbers, behind the ethnic label and apart from the regrets?

“Documenting his personal life is what makes this interesting, but that’s so much harder to do,” Sloope said.

“I tried to trace the Native American side of his family, and that took a lot of long hours of tracking down leads that were false. I found people with similar first and last names, only to find out later that they were not the same ones I was looking for. It took a long time before I finally made the connections.”

Sportswriters called him “Chief York” and “The Indian Clouter.” A cartoonist showed him wrapped in a striped blanket shawl, speaking in monosyllables to another player with Native American heritage.

Sloope didn’t set out to battle the politically incorrect, but his eyes opened to the impact of ethnicity in York’s era.

“During the 1930s, the Sporting News listed players by their nationality – Italian, Polish, Czech, or whatever. They all had ancestors who were from other countries, and for some reason it was important to point that out,” Sloope said.

Particularly challenging to sort out was York’s relationship with alcohol. During his playing days, media coverage didn’t mention it.

“Only after his career, and the 1954 article, did stories of his drinking start to become public to any extent,” Sloope said. “Hank Greenberg and other Tiger teammates would later mention his drinking in stories they gave to various interviewers/authors.” 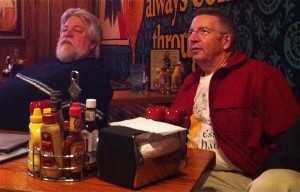 These stories were told “in a humorous fashion, about him falling asleep with a cigarette in his hand and burning down hotel rooms.”

How much of that was true? Did York really “lead the league in burned mattresses”?

“I could only document one case when that really happened — in Boston in April, 1947.”

“A lot of things [written about York] weren’t accurate,” Sloope said. “There was more to him.”

Sloope also tracked down York’s ancestors’ graves, and shared what he found with York’s grateful son, Joe Wilburn York, who York addressed in the magazine column.

The column, Sloope discovered, preceded a difficult conversation between father and son.

“Rudy told him he wasn’t good enough to make it all the way in baseball,” Sloope said of his interview with the son.
“Joe said it hurt and he cried, but that he knew later his dad was right. He had no regrets.”

The record book shows what a slugger he was for his era. In 13 seasons, mostly with the Tigers, York hit 277 home runs, including 12 grand slams. “Ripley’s Believe it or Not” celebrated him for breaking two windows in the same car with two grand slams.

York played in three World Series, including a victory with the Detroit Tigers in 1945.

While those statistics are uncontested, York’s personal details are still coming out. Sloope plans to publish his detective work for SABR readers.

“It’s ironic that I know more about his family than my own,” Sloope admitted.

Obsessed may be one word for Sloope, but that label is too easily slapped on groups like SABR and their members.

What his story of Rudy York reveals most is this: There is no statute of limitations for the truth, in baseball or for the rest of us.

Previous Article
John Stumpf, Wells Fargo’s CEO, open to having an Atlantan on the bank’s board
Next Article
Who will oversee metro transit? GRTA, GDOT, Tollway Authority possible contenders