Hundreds of friends and admirers traveled to Serenbe on Sunday to celebrate the first annual “RayDay” in honor of corporate environmentalist Ray Anderson.

It would have been Anderson’s 79th birthday. 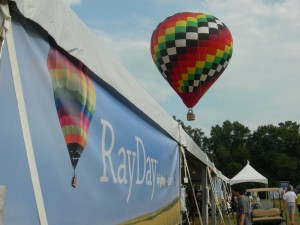 Anderson, chairman and CEO of Interface, a carpet tile manufacturer, had his environmental epiphany in 1994 after reading “The Ecology of Commerce” by Paul Hawken.

Not only did Anderson set out to change Interface, to make it as sustainable a company as he could; he became an environmentalist evangelist in the corporate world, trying to share the enlightenment that he had been given.

It was in the spring of 1996 when I had the good fortune to hear one of Anderson’s sermons — when he described the incredible impact that humans had had on the earth in such a relative short period of time.

For Anderson, it was personal. Here are a few comments he shared with me in 1996 when I was the Atlanta Journal-Constitution’s  business columnist: 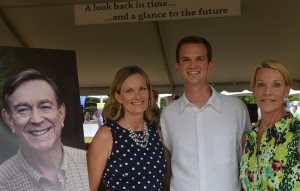 A family photo: (left to right) Portrait of Ray Anderson — next to his two daughters; Mary Anne Anderson Lanier and her son, John Lanier; and her sister, Harriet Anderson Langford (Photo: Special from Anderson Foundation)

Last year, Atlanta-based Interface Inc. used 1.2 billion pounds of material from the earth, of which 800 million pounds were petroleum products a either oil or natural gas.

And that alarms Ray C. Anderson, chairman and CEO of the $802 million carpet tile and interior furnishings company.

As he sees it, our modern society is destroying the earth’s natural balance. We are using nonrenewable resources at alarming rates, the population is increasing perhaps beyond the earth’s capacity and the problems of global warming and coastal flooding are becoming increasingly serious.

“The world is in real trouble,” said Anderson, 61. “The only institution on earth that is capable of making a difference is business and industry.”

Anderson passed away from cancer in August of 2011, shortly after turning 77.

But if Sunday’s event was any indication, Anderson’s ecological footprint certainly left its mark on this earth. Serenbe was turned into a country fair with hot air balloons, children games, sustainability exhibits, trivia games, books, food and fun. There was a solar-powered race car designed by some Georgia Tech students that can hit speeds of up to 55 miles an hour, not quite a record for solar-powered vehicles, but they’re still working on it. 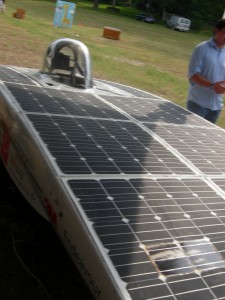 About 400 people, including global, national and local environmental leaders, were present to celebrate the first official RayDay with members of his family, who are carrying the torch through the Ray C. Anderson Foundation.

Harriett Anderson Langford, the second born daughter, said Serenbe in South Fulton County was the perfect place to hold RayDay because of the development’s commitment to sustainability and the environment. Serenbe’s founder, Steve Nygren, has joined the Anderson Foundation as an advisory board member. Langford said her father “would have loved this.”

Mary Anne Anderson Lanier, his oldest daughter, spoke about how many people inspired her father and how many were inspired by him. She said the foundation has “made it possible for us to continue his work.”

And the work is being passed on through the generations. Her son, John Lanier, is the director of the foundation, managing its day-to-day operations. 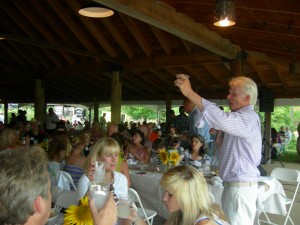 “We are young, and we are new at this,” Lanier said, adding that the foundation to education and thinking about the next generation.

Among the attendees at Sunday’s birthday party were:

Amory Lovins, an American consultant experimental physicist and 1993 MacArthur Fellow, who has been active at the nexus of energy, resources, economy, environment, development and security in more than 50 countries for more than 40 years;

John Picard, an architect recognized for his innovation and creativity in sustainable design who has built and rebuilt homes for Hollywood executives, helping to green the film industry, as well as working with Fortune 500 companies to help them implement sustainable business solutions; 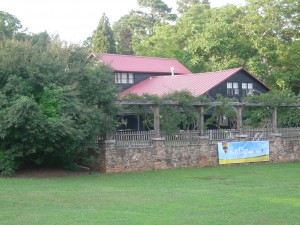 The Inn at Serenbe with “RayDay” banner (Photo by Maria Saporta)

Dianne Dillon-Ridgley, an Interface Inc. director who is an environmentalist, human rights activist who has worked for 30 years on issues of environment and sustainability as well as corporate social responsibility both nationally and internationally;

Julie Wrigley, president and CEO of Wrigley Investments LLC, an asset management company based in Sun Valley, Idaho, who previously had been chairman and CEO of Wrigley Management Inc., the private management entity for the Wrigley family in Chicago, Ill. She serves on the advisory board of the Anderson Foundation; and

Alan Anderson, a retired designer, innovator and past director of Boeing Co.’s Commercial Airplanes’ Concept Center, which oversees the design of passenger cabins for all models of Boeing’s planes. He also serves on the Anderson Foundation’s advisory board. 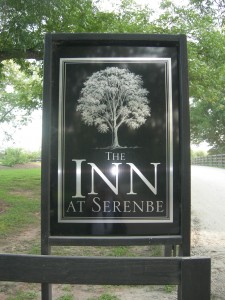 Sign for the Inn at Serenbe (Photo by Maria Saporta)

After a barbeque dinner at an open air pavilion, Mary Anne Lanier helped channel her father to everyone in the room. She said her father liked to ask everyone in a crowd to close their eyes and imagine their most peaceful place, and then she asked them to place themselves in that place.

She then asked for those who were thinking about a place that was outdoors to raise their hands — and then open their eyes. Virtually every one present had their hands raised.

Lastly, Lanier said she wanted to end her comments by reading a poem that an Interface employee had written for Anderson after hearing his vision for the company. Anderson often would end his speeches by reading this poem about “Tomorrow’s Child.”

Without a name; an unseen face
and knowing not your time nor place
Tomorrow’s Child, though yet unborn,
I met you first last Tuesday morn.

A wise friend introduced us two,
and through his sobering point of view
I saw a day that you would see;
a day for you, but not for me

Knowing you has changed my thinking,
for I never had an inkling
That perhaps the things I do
might someday, somehow, threaten you

Tomorrow’s Child, my daughter-son
I’m afraid I’ve just begun
To think of you and of your good,
Though always having known I should.

Begin I will to weigh the cost
of what I squander; what is lost
If ever I forget that you
will someday come to live here too.