Forget buying stuff you and your loved ones don’t need; give a gift that lasts

‘Tis the season of materialism versus what really matters in life.

The juxtaposition of images and messages really collided for me this year following one of those relatively brief encounters with Bill McGahan, the founder of the just-launched Georgia Works! — a year-long program that is putting homeless men to work and helping them rebuild their lives.

McGahan, 51, was an investment banker and real estate investor living in the high-powered world of deal-making and fast money.

And then he retired so he could make a difference in his family’s life and in the lives of those much less fortunate than him — both in Atlanta and in Guatemala.

McGahan is not just a passive investor — contributing hundreds of thousands of dollars to those causes. He is working full-time on transforming people’s lives while taking time to hike some of the world’s tallest summits with his daughter, Sara. (They have just left for a one-month trip to Antarctica where they plan to climb Vinson Massif in minus zero temperatures).

In fact, McGahan and I spoke about how we know many people with plenty of money who are not happy; we often see Americans surrounded with all this stuff, and yet we find that our lives are often lacking — we still are not satisfied or content.

Obviously having more stuff does not equal happiness.

And yet if you look at television or listen to the radio or read newspapers or go online, all you see this time of year is: buy, buy, buy. Now stores are opening up on Thanksgiving Day so shoppers can trample over one another to save a few dollars to buy more stuff.

They are giving up spending Thanksgiving Day with their friends and families so they can buy them holiday presents at a lower price. But what they’re actually doing is cheating themselves out of real, connected experiences with their loved ones — the kind of gifts that enrich our souls and do not clutter our homes or our landfills. 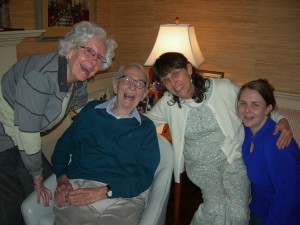 Joyce and Candler Lasseter laughing on Thanksgiving Day. Francie and Alyssa Lasseter enjoy the moment with them (Photo by Maria Saporta)

Some retailers are resisting this gravitational pull towards crass commercialism that is overstepping its bounds into our personal lives.

I found a kindred spirit while having lunch on Dec. 2 with Carol Tomé, the chief financial officer for the Home Depot.

“We are going to try to always stay closed on Thanksgiving,” said Tomé, adding that the website is available to those who must shop on that day. “We view Thanksgiving as a day to be with family and friends.”

For Home Depot, it’s not just about the customers. It’s also about the employees. They want their “associates” to be able to spend a quality day with those they love.

These conflicting messages — reaching out to the poorest among us versus the onslaught of holiday advertising for consumerism at all costs — reminded me of 2012 documentary — Queen of Versailles — about Jackie and David Siegel’s quest to build the largest single-family house in the United States.

There’s a scene in the movie when Jackie and her entourage go to Walmart to do their Christmas shopping — filling up three shopping carts with stuff including a bicycle. Once they get home, one of their maids unloads the stuff in the already cluttered garage placing the new bike next to a huge pile of other barely-used bicycles.

Sadly, our economic indicators seem to be based on how much we buy, how much we spend and consume — not on how wisely we spend either our money or our time.

Are we measuring the wrong indicators for our society? Does buying all this stuff really translate into decent, high-quality jobs or lives? Are we improving the world around us? 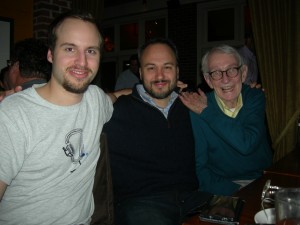 Pope Francis (someone who I, a non-practicing, ambivalent Jew, has come to love and respect) reinforced my sentiments during Thanksgiving week when he urged world leaders to fight against poverty and inequality while calling on the rich to share their wealth.

“How can it be that it is not a news item when an elderly homeless person dies of exposure, but it is news when the stock market loses two points?” the Pope asked.

Pope Francis went on to say: “Just as the commandment ‘Thou shalt no kill’ sets a clear limit in order to safeguard the value of human life, today we also have to say ‘Thou shalt not’ to an economy of exclusion and inequality. Such an economy kills.”

McGahan already has been living that message.

On Nov. 25, when I was speaking to the first enrollees in the Georgia Works! program at the Gateway Center, the men gushed about how their lives were being changed.

They proudly wore their Georgia Works! uniforms. They now had room and board, were working full-time cleaning up trash on downtown streets and were able to keep $90 a week as spending money — a fortune compared to what they have been used to. 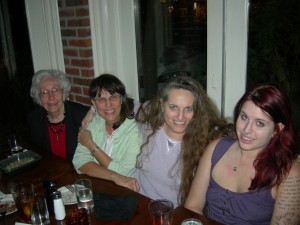 Joyce and Francie Lasseter; SaportaReporta, and my daughter – Carmen Luse at Sunday dinner at Murphy’s (Photo by David Luse)

Personally, I made a point to not do any holiday shopping over the Thanksgiving weekend. Instead, it was a weekend to spend with people I’m close to — my children, my friends and a most special couple — Joyce and Candler Lasseter.

For years, my kids and I have been spending Thanksgiving and/or Christmas with the Lasseters — a couple who have adopted me and my family as an extension of their grandchildren — Tom and Alyssa Lasseter — along with Tom’s and Alyssa’s mother — Francie — my best friend since we were both 13. (Yes families are complicated in this day and age).

Both Joyce and Candler have had health challenges this past year, and our greatest gift has been to be able to spend another holiday with them — all of us in fine spirits and surprisingly good health, all things considered.

So when we are in that nebulous pursuit of happiness, let’s remember that it’s not the stuff that makes us happy. It’s the special people who give meaning, substance and purpose to our otherwise incomplete lives.