By Maria Saporta
As published in the Atlanta Business Chronicle on May 13, 2016

Former Coca-Cola CEO Neville Isdell has embarked on a major venture in Ireland, the country of his birth.

Isdell, who left The Coca-Cola Co. in 2008, has bought an historic warehouse building near the Port of Dublin and turned it into a multi-faceted project – a business incubator, stores and the project’s centerpiece, a major tourist attraction called Epic Ireland. So far, he has invested $27 million of his own money into the development.

On May 6, the former president of Ireland – Mary Robinson – helped Isdell cut the ribbon on the attraction, which tells the story of the Irish people – both those who have remained on the island and those who have become household names around the world – including U.S. President John F. Kennedy and French President Charles de Gaulle.

“We have had absolutely rave reviews since the opening,” Isdell said in a telephone interview on May 10. “We are now at the end of the beginning.” 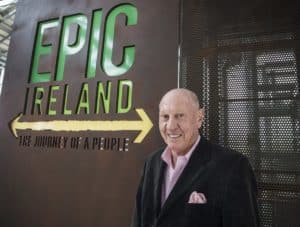 Isdell said he got involved in the project when he wanted to strengthen his investment portfolio by looking for real estate opportunities in Ireland.

“I thought Ireland was the right place – that it would come out of the (economic) crash,” Isdell said. “The Irish government had put a lot of property on the market.”

Isdell thought he would buy an office building, but then the Custom House Quay (CHQ) warehouse – constructed in 1820 – was put up for auction.

“It’s an iconic building. I thought this is something special,” Isdell said. “It really is a unique piece of architecture.”

The government had converted the building into a high-end retail development in 2005 to 2007, but when the economic crash occurred, the project faltered. At the time it was put up for sale, it was only 22 percent leased.

“I fell in love with it and said, ‘Here is a challenge,’ ” Isdell said. “It was a failed shopping center, and it was perceived as a total failure. There were people laughing behind my back.”

Isdell paid about $12 million to buy the 200,000-square-foot warehouse building, which he said was “a very good price.” His stepbrother, Mervyn Greene, who has a background in technology and investments, agreed. And Greene, who lives in Ireland, was willing to be the hands-on manager of the developer.

The project was quirky because the building had the large vaults where tobacco, wool and liquor were stored as they were coming off the ships from the river. “What do you do with this?” Isdell asked himself of the vaults.

So Isdell invested another $15 million to create Epic Ireland, a for-profit 40,000-square-foot interactive attraction that uses the latest technology to tell the story of the Irish – from those who left and were successful to the “bad guys,” like Billy the Kid. The hope is that Epic Ireland will attract 400,000 visitors a year.

“I wanted to tell the story through people instead of it being a dry history lesson,” Isdell said. “I was determined that it would be a 21st Century museum that was visually stimulating. The vaults are the museum. It’s a marriage between history in an atmospheric space with 21st century exhibits. We don’t have artifacts. We have stories, and we tell them in an engaging way.”

A separate entity also is on site to help people of Irish descent to trace their ancestry for an additional fee.

“The building has multiple personalities in different places,” Isdell said.

The technology start up business – Dogpatch – rents “desks and screens” by the month. Currently 30 companies operate in the facility.

“We will almost double the size in July, and we are going to end up with 172 desks,” Isdell said. “Again, that’s been very successful.”

The project, which is near the financial district, also has nine eating establishments, including a four-star restaurant. They used to be open only five days a week, but now they began opening up on weekends because Epic Ireland’s tourist traffic.

“These are things I’m having fun with,” said Isdell, who added that he is the only investor in the project. “I don’t have a board of directors.”

But because he lives in different parts of the world at different times of year (France, Barbados, Atlanta and Capetown), Isdell said that his stepbrother has a financial incentive for the project to succeed.

“We also have an event business. We are right by the river, and there’s a dock. We have the rights to put on events at the dock,” Isdell said, adding that they just put on an event for Facebook. “We are trying to create the whole area as a magnet. We also have a gym.”

Isdell said the project is now almost fully leased out. They have decided to hold back some space to see if they should add another attraction to the mix.

But for Isdell, who left Ireland when he was 10 to live in South Africa, the project is deeply personal. His parents left Ireland because of the conflict between North and South and sectarianism between Protestants and Catholics. His mother was Protestant, and when she died, his father married a Catholic. In South Africa, Isdell got involved in the anti-apartheid movement, and he was Coca-Cola’s CEO when the company donated the property for the Center for Civil and Human Rights in Atlanta.

“This is an all-of-Ireland attraction – the geographic Ireland – not a political Ireland,” he said. “I see Ireland as one entity.”

Isdell, who will turn 73 in June and who has “aged out” as a director of General Motors, laughed about all his endeavors, and admitted that he is only semi-retired.

“You stay younger, and you live longer,” Isdell said, “if you stay active.”