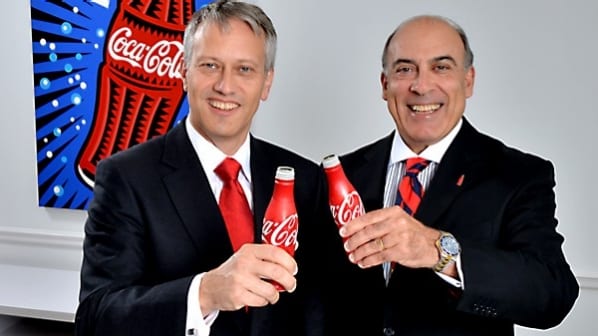 The news that Coca-Cola Co. CEO Muhtar Kent would be succeeded by President James Quincey on May 1 received the endorsement of a former CEO.

Neville Isdell served as Coca-Cola’s CEO from June 2004 through July 2008, when Kent took over the top job.

“It’s been a well-managed transition,” Isdell said. “James has been very successful at everything he has been asked to do. We wouldn’t have hired him if we didn’t think he had the skill set, and he’s demonstrated that in every job he’s been in.”

Isdell, who was attending the Captain Planet Foundation’s 25th anniversary gala on Dec. 9 with his wife Pamela, said he has known Quincey since he joined the company two decades ago. 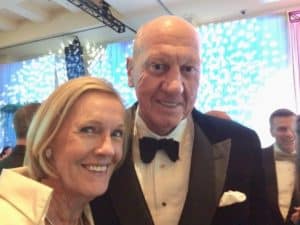 “I was part of a panel 20 years ago that brought in James into the Coca-Cola Co.,” he said. “I’ve known James from when he was interviewing to join the company.”

Isdell also said Quincey, who is British, is a global citizen who has lived in Latin America and is fluent in Spanish.

Asked about how involved Quincey would be in Atlanta, Isdell said it comes with the job of being head of the Coca-Cola Co., the world famous soft drink that was invented at Five Points on May 8, 1886 by pharmacist John Pemberton.

“The community certainly welcomed me when I first came to Atlanta in 1989,” Isdell said. When he was CEO, Isdell also ended up chairing the Atlanta Committee for Progress, an influential business organization that was working closely with then Mayor Shirley Franklin.

Even though Isdell today calls Barbados his home, he said he continues to have strong ties with Atlanta.

“I’m here tonight,” said Isdell, whose daughter – Cara Isdell Lee – was serving as an event co-chair. “My daughter will be on stage tonight. We still support the community financially through our foundation. We are still part of the community.”

Buffett, chairman and CEO of Berkshire Hathaway Inc., said: “As Chairman and CEO, Muhtar has been an excellent steward of Coca-Cola’s business over the last eight years and I am thankful for the leadership he has provided to put in place the right vision, strategy and thoughtful succession plan for long-term success.  I know James and like him, and believe the company has made a smart investment in its future with his selection.” 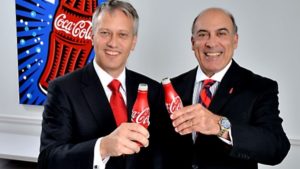 Although Quincey will become CEO on May 1, Kent will stay on as chairman of Coca-Cola’s board. Quincey will stand for election as a director of the company at the annual meeting in April.

“Having worked closely with James during the past 10 years of his 20-year career with our company, I know that his vast industry knowledge, expertise with our brands, values and system, coupled with an acute understanding of evolving consumer tastes, make him the ideal candidate to effectively lead our company and bottling system,” Kent said in a statement. “James has the strategic vision and inspirational leadership to usher in the next phase of growth for our great business.”

Sam Nunn, the independent lead director of the Coca-Cola Co., called Kent a “true visionary” who led the company through sustained growth.

“Among his many achievements, Muhtar has built a world-class leadership team and we are fortunate to have a leader with James’ capabilities as our next CEO,” Nunn said. “James is a proven leader who is passionate about developing people, building strong teams and creating winning cultures everywhere he has been.”

In a statement, Quincey said he was honored and humbled to have been picked to become CEO.

“Muhtar has been a catalyst for change at the Coca-Cola Co. –  driving the transformation of our global bottling system, expanding our product portfolio and making sustainability a business imperative. I am committed to continuing my strong partnership with Muhtar, our talented management team and associates, and our valued bottling partners to continue this momentum and capture the enormous opportunities in front of us.”

Quincey, 51, was named the company’s president and COO on August 2015. and Chief Operating Officer in August 2015. Earlier this year, he put in place a new international operating structure and leadership team to make the company more efficient and effective at the local levels, helping our operating units become faster and more agile.

Prior to this role, Quincey served as president of the Coca-Cola Co.’s Europe Group. Under his leadership, the Europe Group was the company’s most profitable operating group as it strategically expanded its brand portfolio and improved execution across the geography.

Previous Article
DeKalb Avenue make-over reignites debate over cars vs. all other modes of transportation
Next Article
Taj McColl #7 by Kelly Jordan