The historic Fountain Hall on the Atlanta University Center campus made the Georgia Trust for Historic Preservation’s 2020 “Places in Peril” list.

It was one of 10 sites that the Georgia Trust is highlighting as places in Georgia most worthy in being preserved and those that are most threatened to being demolished.

“This is the Trust’s fifteenth annual ‘Places in Peril’ list,” said Mark C. McDonald, president and CEO of the Georgia Trust. “We hope the list will continue to bring preservation solutions to Georgia’s imperiled historic resources by highlighting 10 representative sites.”

The Georgia Trust considers that both Fountain Hall and the Cary Reynolds Elementary School to be vulnerable structures.

Fountain Hall, a National Historic Landmark, was built in 1882. It was originally called Stone Hall. It was the most prominent building on the original campus of Atlanta University, founded in 1865 to educate recently-freed African Americans.

The property was transferred to Morris Brown College in the early 1930s, and it was renamed Fountain Hall after former college president Bishop William A. Fountain.

The building has been boarded up and unused since 2003, and the Georgia Trust put it on the list because it has fallen victim to vandalism and demolition by neglect.

“Left unattended, the building could face a similar fate to its historic neighbors, Gaines Hall and Furber Cottage, both severely damaged by fire in recent years,” the Georgia Trust wrote in the description. “And yet, many alumni, preservationists and individuals are committed to preserving this historic building. With recent momentum and attention, the time for action is now.”

The Cary Reynolds Elementary School, which opened in 1961, features several motifs that followed Portman throughout his career, including a central green space. The building is in dire need of new investment to cover deferred maintenance and improve its performance for students and faculty.

“Advocates fear that the school, without the promised interventions, will be abandoned and demolished, despite its historic significance,” the Georgia Trust stated in a release. “A recently formed community support team hopes to stave off such an outcome, seeking ways to repair and rehabilitate the building and grounds to ensure its continued use.”

The Georgia Trust is announcing its ‘Places in Peril’ list on Wednesday morning, and it will hold a reception at 6:30 p.m. at the Georgia Trust’s Rhodes Hall to present the 2020 list.

In addition to providing greater awareness to these historic gems, the Georgia Trust encourages owners and individuals, organizations and communities to employ proven preservation tools, financial resources and partnerships to revitalize the historic properties that are in peril. 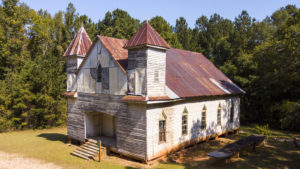 Boasting a congregation that was founded in 1886 by freed slaves from southern Taliaferro and northern Hancock counties, Antioch Baptist Church was constructed in 1899 by local craftsmen.

Still much admired and photographed, the church no longer holds regular services and shows signs of neglect. Water damage is visible inside and out, and the restrooms have been closed off. Though some financial support continues to be provided by descendants of the original congregation, the fate of the building relies on the larger community to care for this unique landmark. 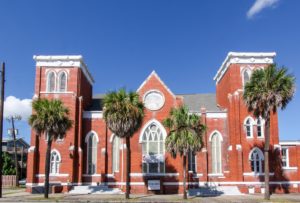 With a congregation celebrating 150 years, the Asbury United Methodist Church on Savannah’s Abercorn Street stands as the only African American United Methodist church in the historic Victorian District. The building dates to 1887 and needs many repairs to regain its place serving the full community.

Deterioration due to water intrusion has left many portions of the building unusable. Faced with the choice of remaining in the historic building or seeking a new place of worship, the congregation is determined to raise the necessary funds to stay. 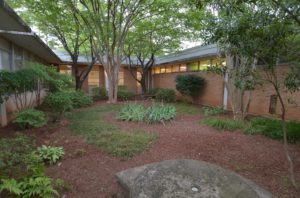 The building—long slated for SPLOST funding to tackle deferred maintenance—remains in need of significant investments to improve the performance of the building and the quality of life for its students and faculty. Advocates fear that the school, without the promised interventions, will be abandoned and demolished, despite its historic significance. 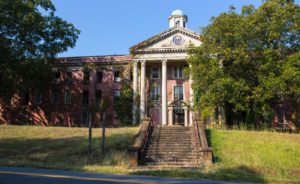 Central State Hospital was Georgia’s first psychiatric institution, eventually becoming the largest mental hospital in the United States and the second largest in the world. The historic campus includes nearly 200 buildings—dating from 1842 to the mid-twentieth century—on nearly 2,000 acres.

Previously a Places in Peril site in 2010, Central State Hospital has continued to suffer from neglect since its full closure in 2013, leading to further deterioration. A redevelopment authority is working to manage the site, and the train depot has been repurposed into Georgia’s Old Capital Museum. However, the scale of the campus and the current condition of many buildings has made fundraising and investment a daunting challenge. 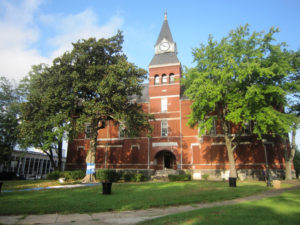 A National Historic Landmark, Fountain Hall was built in 1882 and remains the most prominent building on the original campus of Atlanta University, which was founded in 1865 to educate newly emancipated African Americans. Originally named Stone Hall, the building was transferred to Morris Brown College in the early 1930s and renamed to honor former college president Bishop William A. Fountain.

Boarded up since 2003, Fountain Hall has fallen victim to both vandalism and the intrusion of weather. Left unattended, the building could face a similar fate to its historic neighbors, Gaines Hall and Furber Cottage, both severely damaged by fire in recent years. 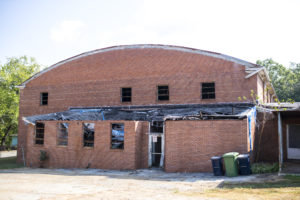 Heritage Park is a community space that reflects the efforts to provide education to African Americans in the South during the twentieth century. The park includes a Rosenwald School—built in 1929 using funds from the collaborative efforts of Booker T. Washington and Julius Rosenwald of Sears, Roebuck and Company—an equalization school, gymnasium and community garden.

In recent years, the park and the properties have been subject to neglect, vandalism, and lack of maintenance. Allocated SPLOST funds have proven to be inadequate for a full restoration of the site although community support for the project remains strong. 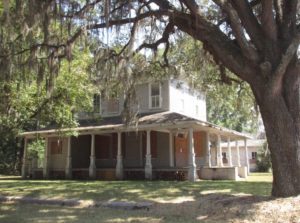 The John Deming Home was built in 1898 by carpenter John Deming, who moved from Canada to Georgia, where he would establish himself as the preeminent master builder in the rapidly growing city of Valdosta. Deming was responsible for many of the city’s most ornate and imposing houses constructed between the late 1800s and 1920s, most notably The Crescent, built for Colonel W. S. West.

The John Deming Home was re-zoned in 2006 for potential new office buildings, and the house, along with three neighboring properties, was swiftly purchased by an investment group. The houses have sat vacant since that time, resulting in severe deterioration. Applications for demolition have been blocked by the local historic preservation commission, but the building continues to decline. 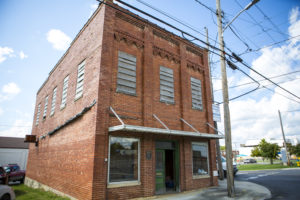 Masonic Lodge #238 stands at what was once a thriving commercial intersection at the heart of Dalton’s African American community. Built in 1915, the lodge offered commercial space on the ground floor while the second floor served as the Masonic meeting hall for African American members.

The building has deteriorated significantly in recent years, leading to a loss of much of the interior. With recent growth in downtown Dalton, including a museum in the former school across the street, there is hope and support throughout the city for saving the lodge. 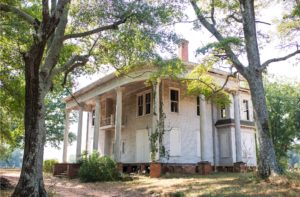 With structures that span nearly a century, the complex of buildings at Nolan Crossroads represent the transition from slavery-based agriculture to the sharecropping economy of the post-Civil War South. The oldest existing house dates to 1817 when the property was part of a large plantation. The Nolan family, who bought the land in the 1850s, transitioned the property to an extensive tenant farm and constructed the main Neoclassical house in 1905.

Still standing are a former commissary for tenant farmers, a mule barn, and several tenant farmhouses in varying states of disrepair. While the original I-house continues to be used by the current owners, the remainder of the structures are vacant. The main house carries signs of considerable deterioration, while its notoriety and rural location have resulted in multiple break-ins and the destruction or removal of many original features. 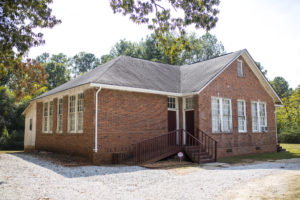 Rose Hill School was built in 1937 by the Bibb Manufacturing Company for the historically black community that was originally developed in the early 1900s as a segregated residential community for mill workers. Rose Hill School was the only African American educational establishment in Porterdale while the mill was in operation. Vacant for many years, the historic school building increasingly bears the scars of decades of neglect and lack of maintenance.

In remaking part of Mechanicsville, the future may lie in the past
John Ruch October 25, 2021 6:36 pm