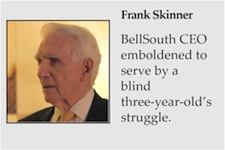 While President and CEO of Southern Bell, Frank Skinner began to take a leadership role in conducting the United Way Campaign for Metropolitan Atlanta. During the introduction to this new role in 1988, he began visiting and touring various facilities served through United Way to see the programs’ implementations firsthand.

Frank had been a community member dedicated to service for years, but it wasn’t until a visit to the Center for Visually Impaired that he made a profound connection in not only his aptitude – but also his responsibility – to serve.

As he toured the center, he walked in and out of several rooms of occupational therapy and training for the visually impaired. In the first classroom he entered, a group was learning to read with braille. He observed as the individuals learned a new way of reading after years of deteriorating vision had finally rendered them unable to read the pages of the books sitting on their shelves.

In the second classroom he visited, he saw people learning to deal with hazards in the kitchen. The group was instructed on everyday techniques and procedures to be able to maneuver through a kitchen and prepare meals when visually impaired.

Predisposed to the hardships he saw being faced in the previous rooms, he entered the third classroom expecting to see a group being instructed on similar training.

“I was totally unprepared for what I saw,” he said.

There was a small, young boy around the age of three in the classroom. The child was well-dressed, but barefooted. An instructor stood next to the child and in front of the two on the floor, three shallow cardboard boxes sat – one filled with Styrofoam pellets, one filled with bricks and one with sand.

Frank looked on as the young boy was being taught how to use his other senses to not only overcome his handicap of being blind since a premature birth, but also the additional handicap of fear of texture. Without sight, he would have to rely on touch to identify these everyday objects and learn to live life depending on a sense that for so many others, is secondary. The instructor placed the boy’s foot in one box and then another, carefully explaining the contents of the box in which his foot was placed.

“For me, it was like a bolt of lightning,” Frank said.

At that Moment, he realized the absolute necessity of providing service to those that have a need.
“Here was this youngster who represented abject need, and here was Frank Skinner who represented capacity – both personal capacity and corporate capacity,” he said.

“It struck me that when need and capacity come together face to face, the result is responsibility.” Frank had been a leader in United Way Campaigns before arriving in Atlanta in 1982, including Charlotte in 1974 and Miami in 1980. His lifelong commitment to community service through BellSouth and as an individual did not go unnoticed.

This year, Frank was awarded by the Turknett Leadership Group with their first Lifetime Achievement Award for Leadership Character. The award recognizes leaders who exemplify the highest standards of character and integrity over a lifetime of service to a firm and to the larger community. Frank has also held volunteer leadership positions with the Atlanta Chamber of Commerce, the National Board of the Salvation Army, and the Atlanta Rotary Club.

Through the Atlanta Rotary Club, Frank saw the opportunity to put in place in the city an interfaith prayer breakfast to emphasize to other business leaders the importance of faith, integrity and the spiritual dimension of life.

In 1998, the Atlanta Rotary Club hosted the first Atlanta Interfaith Business Prayer Breakfast. The breakfast would be a morning dedicated to demonstrating that professional success and spiritual vitality are not mutually exclusive goals to guide a life.

The first breakfast had 1,200 attendees and is still held annually. Speakers include CEOs of large corporations and other individuals that have experienced success in their careers but identify the importance of spiritual success as well.

“It has been very important to have that demonstration of people of different faiths coming together and acknowledging the fact that we are – while in our different beliefs – united in our belief in our creator,” Frank said.

While Frank retired in 1992 as chairman and CEO of BellSouth Telecommunications, Frank remains an influential contributor to the Atlanta business and civic communities. His recognition of his capacity and responsibility to serve doesn’t just influence the organizations he contributes to – it instills accountability in other influential business leaders of Atlanta. 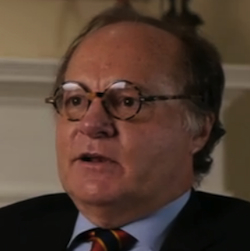 Next week in Moments: Mark McDonald

Next week in Moments: Mark McDonald, president & CEO of Georgia Trust for Historic Preservation, on the Moment he was inspired to save historic places.