From the Great War to the Greatest Generation: Georgia schools and the home front

On the morning of May 23, 1918, superintendent of Fulton County schools J. W. Simmons sat at a desk in a downtown Atlanta courthouse. He, like most other Americans that spring, had been following news from the war front in Europe. It was hard to believe that a country, which had once been so divided over whether or not it should send troops to fight in a European conflict, was now rallying behind the war effort as if democracy itself depended on a victory.

Recent events were to thank for the change in mood. After all, it had only been a year since a coded message from German foreign secretary Arthur Zimmerman bound for Mexico threatened to bring World War I to North America; and two years to the month since the sinking of the Lusitania by a German U-boat. 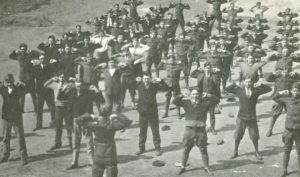 The time for neutrality, it seemed, was up. American “doughboys” were already in the trenches and what they needed was support from home. There is no doubt that Simmons was considering all this as he put ink to paper that morning.

Simmons authored that day a “circular”— a survey, if you will — to be sent out to hundreds of Fulton County residents who all had one thing in common: their children were students at the new Fulton High School in downtown Atlanta. The correspondence was meant to find out whether or not parents were in favor of installing military training for their students. Perhaps it was the war fever talking. Maybe parents craved the discipline it might inspire in their restless youth.

Whatever the reason, 90 percent of respondents were in favor of such training. The Reserve Officers’ Training Corps (ROTC) had come to Atlanta. 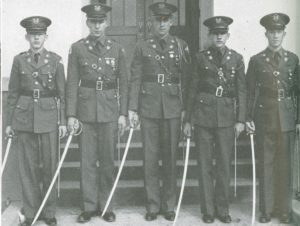 There can be little question the impact that public school systems have had as a home front headquarters for producing both people and material needed for military service. And while Simmons’s circular of May 23, 1918, might not represent a watershed moment in Georgia history, it — along with the National Defense Education Act of 1916 (which among other national objectives, created the ROTC, as well as its junior partner the JROTC) — represents the 20th-century origins of Georgia schools’ participation in carrying out national foreign policy.

But the system did not come together overnight. During the war years 1916-18, Georgia’s schools were still a work in progress. The state was still very rural and racially divided. Only about 74 percent of children in Georgia (590,808) were enrolled in public schools at the outbreak of war, and of those, only about 64 percent (380,749) actually attended classes regularly. Subtract from this the African American students who were excluded from participation altogether, and we can see why military training in public schools could only have so much impact on the generation at large.

Still, the home front of World War I proved to be an adequate incubator for a partnership with the military, and toward this end, participation in the ROTC became as popular with students as both sports and music throughout most of the 1920s and ‘30s. The first girls’ ROTC unit in the country was established at Fulton High in 1925, although most participation of young women centered on support companies and school-sponsored Red Cross units. 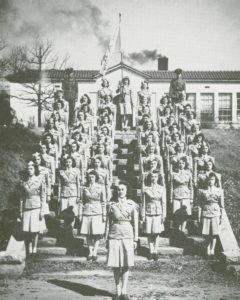 Russell Auxiliary Corps (RACS) at Russell High School in East Point, 1944. The first girls’ ROTC unit in the country was established in 1925 at Fulton High in Atlanta. (Russell Pointer)

By the time the Japanese bombed Pearl Harbor in 1941, companies of youth had long been drilling on the athletic fields of Fulton, North Fulton, and Russell high schools, as well as thousands of other campuses (high school and college) across the country.

The foundation for this training would ultimately help produce the historic home front of the Second World War. Indeed, many of the men and women who fought overseas in the 1940s had once expressed the same measure of devotion to their high school military organizations.

Fulton County and Atlanta Public Schools provided spaces for war industry training, including building and servicing aircraft. Many of the adults who learned these new trades ended up working at Bell Bomber in Marietta. (Atlanta Constitution, March 23, 1942)

But as much as the military benefitted from this influx of well-trained personnel, it also took full advantage of some curriculum changes that had taken root in the early century. A Progressive Era educational movement called “Manual Training” emphasized learning practical skills — subjects such as gardening, woodworking, and domestic arts — as they related to a well-rounded education.

This new curriculum required investments in terms of the facilities needed to support it, which were spaces and classrooms added to existing high schools where “hands-on” learning could take place. Many of these “shops” (the earliest precursors to vocational schools) would eventually be adopted by the U.S. Office of Education at the beginning of World War II and quickly converted into adult training centers — places where thousands of people were taught the skills needed to work in the vast network of American factories that were producing materiel for the war. Many of the adults who learned these new trades ended up working at the Bell Bomber plant in Marietta, where B-29 bombers were assembled during World War II.

Many a “Rosie” would begin her path toward service and independence in these high school “laboratories” born out of turn-of-the-century educational reforms. As it turned out, educators like Simmons had ushered in an age in which citizenship and loyalty were fundamentals of education — very useful to a country in times of need.

In hindsight, we must acknowledge the debate that a military presence in our public school systems causes at different times — the 1960s and the Vietnam War taught us this. But the impact of the ROTC, JROTC, and vocational education on 20th-century America cannot go unnoticed.

At the least, we can always look back at J. W. Simmons and appreciate that his endorsement of military training was first based on the feedback of his constituency, and then appreciate the spirit behind those participated in it.

Mike Santrock earned a master’s degree in heritage preservation from Georgia State University. He is currently working as an archivist in the Fulton County Schools Archives located at the Teaching Museum in Hapeville, Georgia.