After a  challenging primary and lessons learned, Fulton County is taking measures to make sure mistakes aren’t repeated.

With long lines,  shuttered  polling places, absentee ballot issues and a global pandemic to contend with, the June primaries were an example of everything that could go wrong while voting in Fulton County.

However, the county’s Elections Director Richard Barron is hoping for a different outcome on Nov. 3 as measures to reduce long lines and encourage voters to cast their ballots early go into effect. 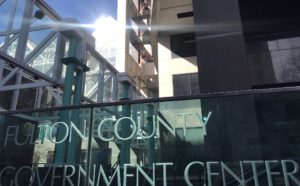 Fulton County has restricted single-use plastics in building and facilities it owns and leases. (Photo by Kelly Jordan)

Speaking with reporters during a press conference last week, Barron detailed Fulton County’s plan for a more efficient voting process, which includes increasing the number of precincts and poll workers, adding mobile voting buses and offering a voting app ahead of the Nov. 3 election. The increased measures are funded by a $6.3 million grant from the Center for Tech and Civic Life.

“One of the silver linings from June is we have been able to count on community partners to step forward and say ‘we want to be involved in this election,’” Barron said. “And that has enabled us to get a lot more facilities involved to be polling places for this election.”

This time around, the county has increased  its number of polling places to 255 precincts, including State Farm Arena which will have about 300 polling stations and 60 check-in areas. The Georgia International Convention Center in College Park and the Dorothy C. Benson Senior Multipurpose Complex in Sandy Springs were also added as precincts and will hold 50 polling stations each.

As the number of precincts increased, the county is also adding more poll workers to staff the Nov. 3 election. More than 6,000 people applied to be poll workers, but Barron said the county only needs to train and assign about 2,900 poll workers. That number is an increase from the 2,100 who worked the polls in 2016.

Barron is confident that the additional workers combined with efforts to have residents vote by mail will be sufficient to mitigate the delays seen during the June primary. But even as the county works to improve its Election Day plans, officials will still have to worry about the spread of COVID-19. 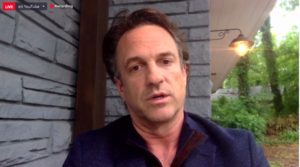 “The message we’re getting is that we can do social distancing in line, but once we’re in an enclosed area, we need to get them through quickly,” Barron told SaportaReport . “It’s tricky. Right now, a short line trumps a concern for COVID. And that message is not just the state telling us that, everyone wants shorter lines.”

The county can’t require voters to wear masks, but Barron said poll workers will be wearing them. “At least where I go, I don’t see anyone without a mask, but I don’t know if that’s true in all parts of the county,” he said.

That uncertainty is also part of the reason Barron’s urging residents to vote early or by absentee ballot. Of Fulton’s 750,000 registered voters, Barron is hoping 80 percent of them submit absentee ballots or early vote. By Friday afternoon, the county received 157,000 absentee ballot requests. He expects that number  will hit 300,000 for the Nov. 3 election.

In addition to pushing mail-in voting, the county has added safeguards to make the voting process easier. All precincts will have a special station where residents can cancel their absentee ballot applications should they not receive them before Election Day. Barron could not provide a specific number on how many people will work the station, but he said the process to cancel your ballot application will be quicker than previous years.

The county will also provide two mobile voting buses with nine voting stations on them. The buses will be sent to each of Fulton’s six commission districts for six days each. “On the last day, we will use them to help with overflow at two of the busiest locations other than the mega sites,” Barron said.

Voters will also have access to a voting app that will allow them to check the wait times for their voting precinct. It will also connect to the Secretary of State’s My Voter Page. The app will be released closer to the Nov. 3 election. More information about the app will be available on Fulton County’s website at a later date.