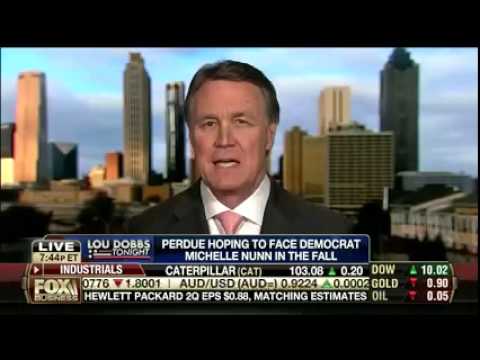 As Atlanta and Georgia leaders seek to convince General Electric to move its corporate headquarters here, they can learn a lesson from Texas.

One issue near and dear to GE’s heart these days is the reauthorization of the Export-Import Bank – a government entity that finances and insures foreign purchases of U.S. goods for customers unable or unwilling to accept credit risk.

Congress let the bank’s charter expire earlier this year, and GE has made it clear that the Ex-Im Bank is key to its global business success.

So when key Texas lawmakers – U.S. Sen. Ted Cruz (R-Texas) and Rep. Jeb. Hensarling – emerged as the key opponents to the reauthorization of the Ex-Im Bank, word has it that Dallas was struck from GE’s list as a possible headquarters site.

A David Perdue campaign ad for when he was running for the U.S. Senate

According to people close to the process, Atlanta and Georgia are sill in the running for GE’s headquarters.

State and local leaders had an opportunity to demonstrate their Southern hospitality when a few members of the GE corporate headquarters study team visited Atlanta earlier this month.

GE has said it is seriously considering moving its headquarters out of Connecticut because of the high corporate taxes.

The question, however, is whether the Georgia Congressional delegation will face the same scrutiny from GE as did Texas when it comes to the Ex-Im Bank.

Among its two U.S. Senators, Georgia had a split decision. U.S. Senator Johnny Isakson (R-Ga.) voted in favor of the bank’s reauthorization while U.S. Senator David Perdue voted against it.

After Perdue spoke to the Rotary Club of Atlanta on Monday, he was asked about his position on the Ex-Im Bank as it relates to Georgia’s desire to lure GE’s headquarters here.

Perdue explained that the Ex-Im Bank vote this summer was part of another bill, which he could not support because it was “an unfunded mandate.” Perdue, who has called the nation’s debt one of our greatest problems, said he is careful to not support legislation with unfunded mandates.

“We’ve got to find a balance,” Perdue said. “There are large corporations who need help (mentioning GulfStream as one). We have not found that balance right now.” 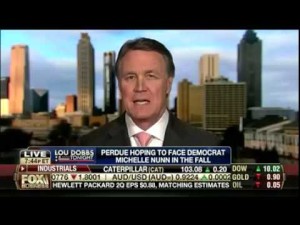 Perdue is often recognized as one of the few corporate executives serving in the Senate. He said he understands that some companies will be at a competitive disadvantage if the bank is not reauthorized.

In other words, although Perdue voted against the reauthorization of the Ex-Im Bank, he is not a passionate or outspoken opponent of the bank if it is properly funded – especially when compared to his Texas colleagues.

Plus, from Perdue’s point of view, Georgia would be an attractive choice for GE’s headquarters.

“The reasons to come to Georgia are multi-fold,” Perdue said about GE. “We’ve got a strong workforce, research and higher education, a high tech community in a pro-business state with a pro-business governor.”

Perdue also said Georgia is the only state in the country where both of its U.S. Senators have a background in business – which GE might find appealing.

Economic development insiders have speculated that GE hasn’t crossed Georgia’s name from the list for GE’s corporate headquarters because of the split decision among its two Senators. The July vote in favor of reauthorization passed the Senate with a tally of 67 to 26 with seven abstentions.

Meanwhile, the U.S. House of Representatives could be voting on the reauthorization of the Ex-Im Bank as early as Tuesday.

It is a given that GE will be monitoring how the Georgia delegation will be voting on that bill. GE also will be following the votes of other states still in the running for the corporate headquarters of the Fortune 10 company.

The Exporters for Ex-Im Coalition issued a statement Monday on the possible reauthorization vote.