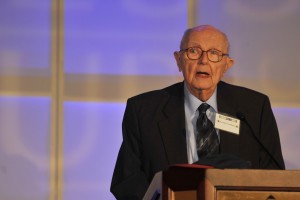 George Goodwin, one of Atlanta’s leading journalists and public relations executives, passed away peacefully Wednesday morning at his home with his family by his side.

Goodwin, 97, had many claims to fame. He was the first Atlanta journalist to win a Pulitzer Prize for distinguished local reporting. And he was the undisputed dean of public relations in Atlanta – serving as the city’s top advocate for decades.

He once told me Atlanta did not need a slogan. The simple word – Atlanta – was beautiful enough to stand on its own.

The family prepared a detailed obituary of his life, which it shared with me, and I, in turn, am sharing it with you.

All I can say about Goodwin is that he represented all those great qualities that helped Atlanta mature from a small Southern city into the metropolis it is today. He helped guide the city through the transition of segregation to integration by relying on his natural Southern gentleman charms.

Throughout his life, Goodwin seemed to have one key goal in mind. What message, policy or attitude would place Atlanta in the best possible position nationally and internationally.

The Atlanta Press Club inducted Goodwin into its Hall of Fame in 2012. I’ll never forget how he came to the dinner wearing an Atlanta Press Club baseball hat from two decades ago – showing how he had treasured the different momentos in his life.

So many people, especially the women in the crowd, kept commenting on how cute he was. But when he started talking, it was clear that Goodwin’s messages of the need for strong journalism were as powerful as ever.

Here is a youtube video we prepared for that occasion.

Also, the year before, Goodwin received the Dan Sweat award from Central Atlanta Progress. Here is the youtube video that was produced for that annual meeting.

A memorial service for Goodwin will be held on Monday, Jan. 26 at 11 a.m. at Trinity Presbyterian Church of Atlanta. The address is 3003 Howell Mill Road N.W.

Here is the family-prepared obituary:

George Goodwin, Pulitzer Prize-winning journalist and public relations trailblazer, helped shape modern Atlanta. Since the 1940s, his quiet influence helped guide the city into becoming an economic powerhouse and major population center. His greatest talent was helping people of different political, religious, and social backgrounds work together for the common good of Atlanta. He never sought the personal spotlight, believing instead in Robert Woodruff’s creed, “There is no limit to what a man can do or where he can go if he doesn’t mind who gets the credit.”

As an Atlanta newspaper reporter – first with The Atlanta Georgian and later with The Atlanta Journal – he covered many of Atlanta’s biggest stories, including the motion picture premiere of “Gone With The Wind” and the Winecoff Hotel fire, which remains America’s deadliest hotel fire.  As a Journal reporter in 1947, his series exposing voting fraud in Telfair County, where the dead voted in alphabetical order, was tied to a point in Georgia’s infamous history when three politicians claimed to be the state’s governor. In 1948 for this investigative series, Mr. Goodwin was awarded the first Pulitzer Prize in journalism for Distinguished Local Reporting, a first for the Atlanta newspaper. He later explained to Journal readers details of the 1951 Plan of Improvement which expanded Atlanta’s city limits and changed government responsibilities in Atlanta and Fulton County. His interest in civic affairs never ceased.

In 1965, he opened the Atlanta office of Bell and Stanton Public Relations, headquartered in New York.  This was Atlanta’s first national public relations firm later called Manning, Selvage & Lee.  It is now known as MS&L Worldwide and continues to count among its clients many of Atlanta’s premier businesses.  Mr. Goodwin was acknowledged nationally as Atlanta’s “dean of public relations.” Two awards are named in his honor: MS&L’s grant for community service and the Public Relations Society of America Georgia chapter’s award for volunteer service.

Search Atlanta’s history over the past 65 years and you’ll find George Goodwin’s name subtly interwoven. His role in shaping the city is preserved in the archives of the state’s major universities.  Be it planning for growth and development; sustaining libraries and the arts; promoting philanthropy; improving education; advancing race relations or encouraging civic responsibility, George Goodwin was a force for progress and understanding.  He helped charities and foundations raise and distribute money.  He applied his exceptional writing skills to present the city favorably to business interests around the world. Mr. Goodwin’s ability to listen and then share advice was valued by generations of Atlanta civic, business and government leaders.  Mayors William B. Hartsfield, Ivan Allen Jr., Sam Massell, Maynard Jackson, Andrew Young, and Shirley Franklin sought his counsel as did many seeking public office. He was admired as a progressive thinker who understood and drew energy from the urban environment.

Born and raised in Atlanta’s West End, he lived near the Wren’s Nest library branch which became almost a second home for him.  As a teenager, he sold issues of The Saturday Evening Post.  Mr. Goodwin was a life-long supporter of his alma mater, Atlanta’s old Boys High School, and in 2006 – with Herbert Miller and Anya Martin – wrote the book “Boys’ High Forever: The History of an Extraordinary Atlanta Public High School.” Washington and Lee University, from which he graduated in 1939, awarded him an honorary doctorate in 1997.  He served in the Office of Naval Intelligence in the Pacific during World War II and was a Purple Heart recipient. Mr. Goodwin is also honored with a place in the Atlanta Press Club’s Hall of Fame and was the 2011 recipient of the Central Atlanta Progress Dan Sweat Award.

He and his beloved wife, Lois “Skippy” Goodwin, were among the founders of Trinity Presbyterian Church on Howell Mill Road in 1949. Former Trinity senior minister the Rev. Joanna Adams, speaking at Mr. Goodwin’s 95th birthday observance, said, “Of all the legacies George is going to leave, most significant has been helping our city learn how different people can live together and communicate with each other in a spirit of civility and respect.”  Also at that birthday celebration, Trinity’s current senior pastor, the Rev. Pam Driesell, said of Mr. Goodwin, “You spent your days — and spend your days still — investing in community. You sacrificed your time, energy, intellect, words, and other resources when you invested in the community of Trinity Presbyterian Church. It is a thriving community of faith that has invested in the community of Atlanta … and those investments continue to bear fruit.”

Mr. Goodwin was instrumental in forming the Atlanta Arts Alliance, chaired the city’s observance of the nation’s bicentennial, was an Oglethorpe University trustee, and a member of the Atlanta Rotary Club.  He served on the board of directors for Atlanta Cares, the Interdenominational Theological Center, and the Alliance Theatre. He helped found The Westminster Schools and in the reorganization of The Lovett School.

From 1952 to 1954, he was executive director of the Central Atlanta Improvement Association that later became Central Atlanta Progress.  Between 1954 and 1964, he was a vice president of The First National Bank of Atlanta.  As a member of the Atlanta-Fulton County Library System board of trustees, Mr. Goodwin was a positive influence regarding racially integrating the public libraries in 1959. In the 1960s, he spearheaded the Forward Atlanta project, a movement that put Atlanta on the map as the capitol of the New South.   Fifty years ago, he was one of the sponsors of the historic Atlanta dinner honoring Dr. Martin Luther King, Jr., after Dr. King received the 1964 Nobel Peace Prize.  Mr. Goodwin played a major role in creating MARTA and advised on the city’s traffic and transportation issues. At age 88, he still came went in to work every day, only retiring in 2005 after the death of his wife of 65 years.  As one friend summed it up, Mr. Goodwin had his hands in so many things, but his fingerprints aren’t visible on many of them.

Away from work, he was a member of the Hal Davidson Philosophy Club, The Inquiry Club, The Breakfast Club, and the Atlanta Chapter of the English-Speaking Union. Whether enjoying a dinner discussion group with his wife and friends or influencing decision-makers, he was noted for his pregnant pauses followed by a piece of wise advice. When he got an impish glint in his eyes, a wickedly funny story would follow.  All was tempered by his wisdom, insight, good judgment, kindness, tolerance, and genuine interest in the people around him.

He is acknowledged as one of the best friends Atlanta ever had.  Without George Goodwin, Atlanta would not be the good city it is today.

In lieu of flowers, donations may be made to the Trinity Presbyterian Church of Atlanta Trust Fund, to Friends of Disabled Adults and Children of Stone Mountain, or to a charity of your choice.