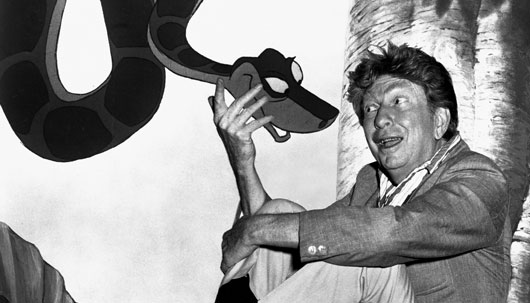 This week, ALLISON HUTTON, of Georgia Humanities, introduces the Georgia actor who provided the voices of some of Walt Disney’s most memorable characters.

Before Georgia became the “Hollywood of the South,” it sent a number of actors and actresses west to practice their craft. Georgia native Kim Basinger, a daughter of Athens, won the Academy Award for Best Supporting Actress for her portrayal of noir bombshell Lynn Bracken in 1997’s L.A. Confidential. Smyrna-born Julia Roberts won the Academy Award for Best Actress for her portrayal of title character Erin Brockovich (2000). Earlier, actor Oliver Hardy of Harlem (Columbia County) made his mark as the larger half of the prolific comedy duo Laurel and Hardy. Tight skirt or bowler hat, none of these Georgia talents could be easily missed.

If you had been strolling through Hollywood in the mid–twentieth century and passed another Georgia actor, Sterling Price Holloway Jr., you likely would not recognize him unless you paid special attention to minor roles in film and guest appearances on television. If you had ever spoken to Holloway, though, and you were an aficionado of Disney animation, his voice — high-pitched for a man — would have been familiar. It was a distinct voice, and one in which Walt Disney himself heard something unforgettable and very special. Holloway was a voiceover actor with a talent every bit as recognizable as that of Basinger, Roberts, and Hardy.

Holloway with Kaa. Courtesy of D23.com

According to the New Georgia Encyclopedia, Holloway, born in 1905 in Cedartown, Georgia, in Polk County, began his career as an actor when he was a teenager. After graduating from the American Academy of Dramatic Arts in New York City, Holloway was cast in Rodgers and Hart’s first Broadway musical, The Garrick Gaieties. He left the stage for film work, but the going was slow, and his career was interrupted by World War II.

Holloway’s talent made him a candidate for the Special Services, the entertainment division of the army. Holloway was in good company. Other Hollywood notables assigned to the Special Services included Clint Eastwood, Dick Van Dyke, Sammy Davis Jr., and Leonard Nimoy. Working in Los Angeles, Holloway was part of a team that entertained servicemen with a military-themed show that they eventually took on the road to Italy and North Africa.

In 1998 the Georgia Historical Society honored Holloway with a marker in Cedartown. Courtesy of GeorgiaInfo

When Holloway resumed work in Hollywood after the war, he played small roles in movies and on television, first in Gene Autry movies and then on The Andy Griffith Show, The Twilight Zone, and Gilligan’s Island. Holloway was a working actor, but these parts offered little satisfaction. As well as Holloway played the roles he was offered, he was still unable to make a significant impact on the industry.

Holloway’s talent shined, however, in voiceover roles. Through the years he won small roles in Disney animations. Holloway voiced the stork in Dumbo in 1941, and in 1942 he played the role of the adult Flower, a skunk, in Bambi. In 1946 Holloway narrated Peter and the Wolf. He was Amos, a church mouse who befriends Benjamin Franklin, in 1953’s Ben and Me (Holloway was the “me” of the title). 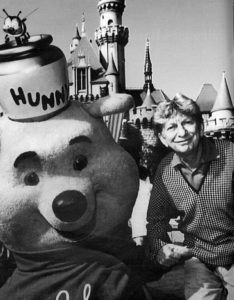 Two of Holloway’s most memorable roles came in the 1950s and ’60s. Holloway provided Alice in Wonderland’s Cheshire Cat with a loopy, fantastical voice that was perfectly on par with the cat’s enormous grin, pink and purple stripes, and body with a detachable head. While the Cheshire Cat was humorous, in his next Disney role, Kaa the python in Jungle Book (1967), Holloway played the butt of the joke: the lisping snake, in thrall to Shere Khan the tiger, never quite managed to eat Mowgli, though he certainly tried.

Holloway’s starring role came as Pooh in the Winnie the Pooh cartoons of the mid-1960s; he voiced the bear into the 1970s. In these cartoons, gone are the mysterious and slightly off-putting tones of the Cheshire Cat. There is none of the slyness that characterized Kaa. Instead, the timbre of Pooh conveys a warmth, openness, and innocence that helped make the character into a Disney favorite.

In 1991, the Walt Disney Company honored Holloway as a Disney Legend. He died a year later, a man recognizable as a grinning feline, a slithering snake, or a silly old bear.