Georgia Aquarium steps in to care for threatened manatees

The two manatee calves will likely be released into the wild sometime next year. (Photo courtesy of the Georgia Aquarium)

Florida’s manatees — a big, slow-moving aquatic mammal so unique that the species inspired mermaids — are dwindling in population, rapidly. In 2021, a record-breaking 1,101 manatees in the state died. A group of animal lovers, though, aim to reverse the trend.

Manatees are dying at alarming rates due to starvation — with 465 deaths this year so far, according to the Florida Fish and Wildlife Conservation Commission.

The aquatic mammals depend on seagrass, an increasingly depleted resource due to human interference and pollutants. The species was moved down from endangered to threatened in 2017, which some experts disagree with due to the current wave of deaths. Some manatees also sustain injuries from boats in shallow waters.

In the U.S., manatees stick to Florida’s rivers, bays and canals in the winter months. Many of Florida’s critical care facilities are overloaded with manatees facing dangers like malnutrition, boats and fishing nets. 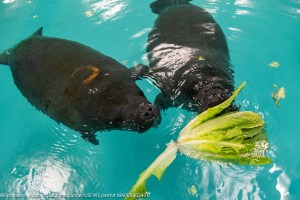 Manatees eat about four to nine percent of their body weight every day. (Photo courtesy of the Georgia Aquarium)

“They’re air breathers, they nurse their young, and they do all of the things that we – as mammals – do,” Clauss said. “They’re just very unique critters. They can utilize freshwater and brackish water habitats. They’re extremely large herbivores, just eating vegetation. There’s always been something about them that I find very intriguing.”

Last month, the Georgia Aquarium welcomed two orphaned calves who require care. The pair aren’t siblings, but both were brought to the SeaWorld Rehabilitation Hospital in December 2021 before coming to Atlanta.

Calves are dependent on their mothers for one to two years, and while both orphans are in good health, they are too young and small to survive on their own. The little ones currently weigh around 200 lbs, with adults ranging between 800 and 1,200 lbs. 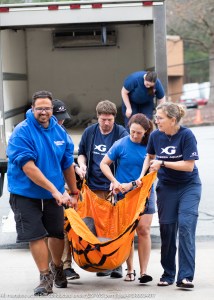 “Because they were orphaned, they could not live on their own out in the wild, especially not during the colder winter months,” Clauss said. “They were deemed as healthy animals that certainly had a very significant chance at making it long term, but they would need support to grow up.”

The duo will likely be with the Aquarium until sometime next year, once they can fend for themselves in the wild. When that time comes, the team will work with partnering entities to move the calves to a facility closer to the coast, where they will then be released into their natural habitat.

These sea cows aren’t available for public viewing; instead, they’ll be staying in a special care facility. This facility is currently at capacity with the two calves, but the team is working through logistics to add another habitat that can house two additional manatees.

These conservation and rehabilitation efforts aid the heavily-threatened manatee population, but larger solutions are required to ensure that 2022 isn’t another record year for manatee deaths. As Clauss puts it, “we really have to start taking care of our planet.”

“It really doesn’t matter what the water body is, whether it’s a stream, river, pond, lake or the ocean, any of our water bodies on this planet are exceptionally important to life as we know it,” Clauss said. “Be mindful. Understand that everything we do has an impact and can end up in our waterways.”

She encourages folks to tread lightly on the earth, cut down on car use, consider how much waste you’re producing and advocate for elected officials to protect the natural environment.

“Understand that we need to live in harmony and coexist with the other creatures on this planet. It’s not just about us as people,” Clauss said. “When we start to see the depletion of species, it means that our environment is unhealthy.”

Previous Article
An Atlanta Institution
Next Article
Mayor announces affordable housing “strike force.” But what is it?