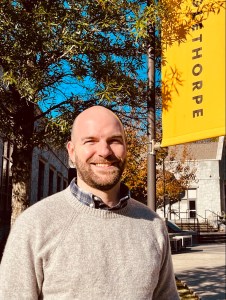 Peter Dye is the assistant director of community and global engagement at Oglethorpe University.

Oglethorpe spearheaded the effort because our undocumented student enrollment has steadily increased since our 2019 partnership with TheDream.US, a national scholarship program that helps provide access to a college education for immigrant youth who came to the country at a young age without documentation. Even for those of us who work closely with undocumented students, it can be difficult to truly understand the size and scope of the barriers stacked against them. This conference aimed to help attendees better understand the immigration context affecting their lives and share best practices and resources to provide support.

In one session, a panel of Oglethorpe’s undocumented student leaders highlighted the realities of living and studying in Georgia while undocumented. Common threads connecting their stories included coming to the U.S. as young children, completing K-12 in Georgia, navigating multiple cultures and languages, acclimating to college as first-generation students, having no access to in-state tuition or federal financial aid, being barred from admission to Georgia’s top public colleges, and receiving little to no guidance in high school about higher education options. In fact, some were told directly by high school counselors that college wasn’t an option for them.

The support the panelists described receiving came primarily from other undocumented students who were willing to talk openly about their status. One of those former students was a conference keynote speaker. As a teenager, Yehimi Cambrón started the first undocumented student organization at Cross Keys High School which is still active today.

Cambrón recounted one of her first confrontations with her “illegality.” At 16 years old, she won third place in an art contest and was invited to a ceremony at the Georgia Capitol to showcase her art and receive an award with the other winners. She was told that she would be unable to claim her $50 prize because she didn’t have a social security number.

“I walked away empty-handed from this golden dome building where I was being honored for my work,” Cambrón said. “I realized my status was very limiting and would have an impact on my future.”

Since then, she has helped undocumented youth come out of the shadows, own their status, and gain empowerment through education. Cambrón eventually gained a work permit through the Deferred Action on Childhood Arrivals (DACA) program and was able to return to Cross Keys as an art teacher. She has achieved national recognition as an educator, activist and artist whose art has been housed in the High Museum of Art, and her murals can be seen all over Georgia. She has been an inspiration to a number of Oglethorpe students who hope to carry on in her footsteps of opening up opportunities for those who come after them. 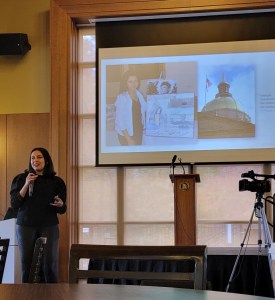 Those opportunities, however, still do not come easily in Georgia. Beyond the challenges of access to higher education, undocumented Georgians are forced to grapple with ever-changing immigration policies affecting their ability to live, work and study. Each of the conference keynote presenters touched on the uncertain future of DACA, the program that has shielded tens of thousands of so-called “Dreamers” in Georgia alone from deportation over the last decade and granted them work authorization (provided they pay the $495 renewal fee every 2 years). DACA, however, provides no pathway to citizenship.

Charles Kuck, the Managing Partner for Kuck/Baxter Immigration, put into perspective exactly what the end of DACA would mean for the state and the country financially. Georgia’s DACA-recipient households pay $151 million in federal taxes and $88 million in state and local taxes every year. Even undocumented immigrants without DACA contribute taxes through individual tax ID numbers as independent contractors. This tax revenue largely goes towards programs they are ineligible to benefit from themselves (i.e., Social Security). In addition to taxes collected, U.S. Customs and Immigration Services (USCIS) has received $1,921,367,745 in DACA filing fees over the last decade. That’s billion with a b.

So what can we as individuals and institutions do?

Lee reminded attendees that DACA recipients have renewable work authorization and can be legally hired to work without any special sponsorship. For those without DACA, universities can develop inclusive fellowship and internship programs, provide accessible institutional scholarships, promote independent contracting opportunities, and train future graduates to own and operate businesses (which can be done with only a tax ID number).

“They don’t need saving and they aren’t voiceless,” she said. “Their voices are just excluded. So listen, organize and harness your privilege to dismantle barriers that are meant to separate us.”

Higher education and community leaders can organize, learn, educate, vote and most importantly, be there for undocumented students while following their lead.

That advice was echoed in sessions throughout the day as presenters urged attendees to take cues from undocumented students, activists and leaders.

No matter what happens with state and federal policies, this conference showcased the fact that there are resources and organizations throughout Georgia to support undocumented people. Despite the often pessimistic outlook toward immigration policy reform, undocumented students can still pursue their goals, and they have people they can turn to for help.

“Even without DACA,” Rodriguez said, “there is hope.”