These sentiments are reflected in a study conducted by goBeyondProfit, an organization launched by Georgia business leaders, which investigated the link between corporate values and employee and customer satisfaction.

The results revealed an energized consumer base. According to the report, 73 percent of Georgians say they’ve changed their spending habits based on a company’s actions, mostly based on topics like politics, race and the environment. Over half of these customers reported boycotting a company and trying to convince others to tighten their purse strings, too.

The research also shows that 83 percent of customers expect the businesses they frequent to show generosity and community outreach. GoBeyondProfit President Megan McCamey said that to be successful, companies should have a deeper understanding of their customers’ priorities.

The report noted that those primary concerns include: A strong business culture, positive environmental practices and charitable giving.

On the corporate side of things, 90 percent of executives consider these heightened expectations as a positive opportunity rather than a burden.

“What’s fantastic is to see that with these heightened expectations, executives in our study are ready to embrace it,” McCamey said. “The great news is they’re all in.”

But how do business leaders get involved successfully? 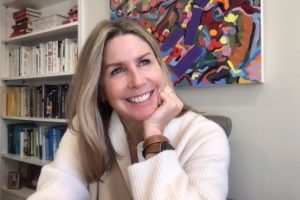 GoBeyondProfit President Megan McCamey said strong values and aligning actions are key for successful businesses. “You’re going to see tremendous benefits for people, for the community, for the planet and for business,” she said. (Credit: goBeyondProfit)

In the mission for cohesion, McCamey notes three players  — customers, employees and the business.

The research indicates that when a company is transparent about its values and reflects them in its business practices and treatment of employees, consumers have greater satisfaction and loyalty to the brand.

McCamey pointed to Carol Tomé, CEO of UPS, as an executive who is doing it right.

“She took the time to reevaluate their corporate values and to create an entirely new corporate purpose statement that reinforced those values,” McCamey said. “She’s been using both of those very visibly to make choices around her care for her employees.”

McCamey noted the importance of building company culture from the inside out, making sure their employees feel taken care of and then broadening the scope to reach customers.

She also highlighted two major takeaways from the research. One, to keep employees and the public happy, executives must speak up.

“[Businesses must] understand what your people value and how that aligns with your core company values,” McCamey said. “Go ahead and make those visible, demonstrated steps, internally and externally, that line up with those shared values. You’re going to see tremendous benefits for people, for the community, for the planet and for business.”

Secondly, if an executive isn’t willing to step up to the plate, “the risks are real,” McCamey said. The path for success ultimately lies in transparency, clear values and actions that reinforce company ideals.

“It’s important for companies to realize [that] doing nothing is not actually an option,” McCamey said.