How Georgia helped FDR – and the world – fight polio 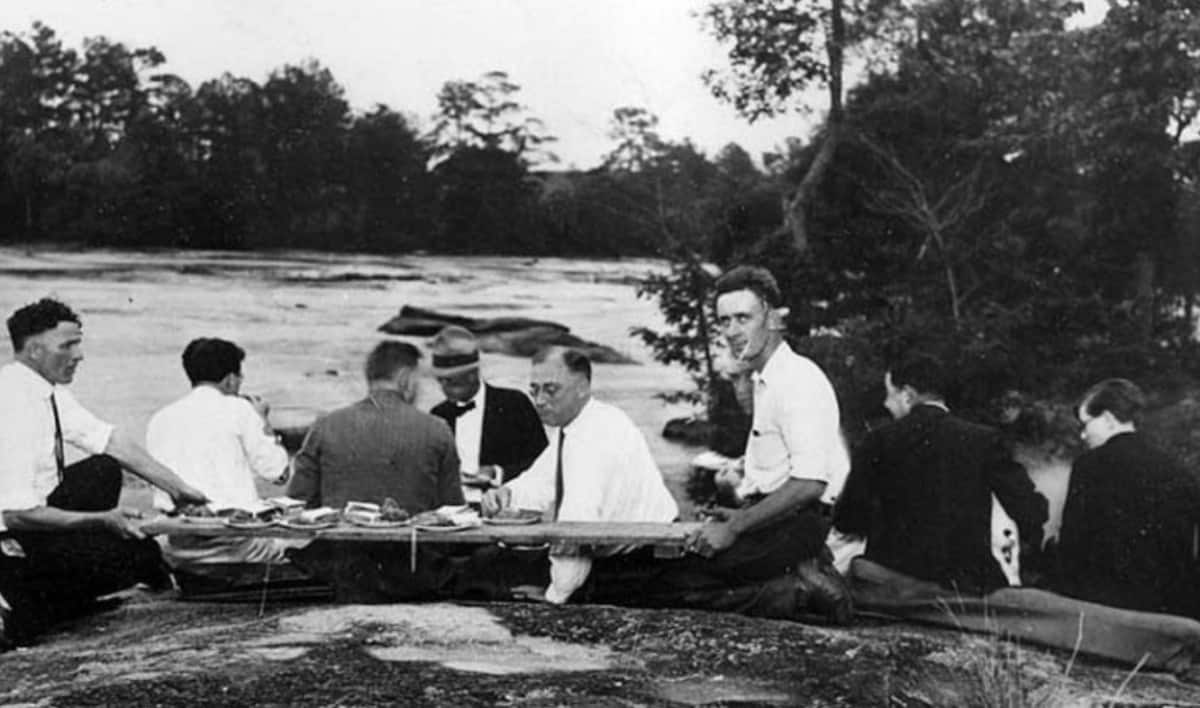 Franklin D. Roosevelt was a rising political star with a golden surname. He was handsome, a Harvard graduate, and as close to American aristocracy as one can get. He was a likeable fellow, too, with a streak of ambition. Already at the age of 39 he was named a vice presidential candidate for the Democratic Party (the ticket lost to Warren Harding). 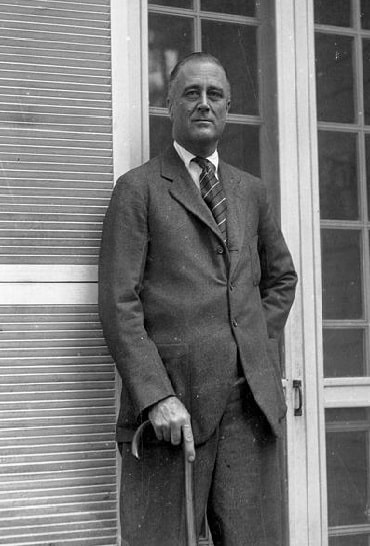 The following summer, while vacationing at his family home in Campobello, Roosevelt discovered one morning he couldn’t get out of bed without help. Within a few days, the use of his legs was gone. He had contracted polio, probably when he paid a visit to a Boy Scout encampment in Pennsylvania.

After several months of desperately seeking the best medical care and advice available on the planet, he came to terms with the reality of his condition. He would never again walk. Depressed, disgusted with himself, ashamed, he threw in the towel.

Now he spent part of the year away from his family, holed up in a houseboat in Miami that someone described as a floating dump. He lived with an aide who cooked and cared for him. His legs atrophied, and unable to stand at all, he spent more time drunk than sober. His mother wanted him to come home to New York, but to what? His wife wanted him to get a life, but this was America in the roaring 1920s. People like him were referred to as “crips.” He had no work, no purpose, and no hope.

In 1924 Roosevelt received a letter out of the blue from his good friend and fellow Democrat, George Foster Peabody of Columbus, Georgia, inviting him to Warm Springs to take its famed water cure. Peabody was part owner of the resort there. What did FDR have to lose?

After his first few weeks, Roosevelt liked it. He decided to stay. Eleanor visited but left quickly. It was definitely not for her. For him, though, there was new purpose.

What was it exactly? Perhaps it was the innocence of the polio kids at Warm Springs who shared the pools. They had so little compared with him, but they still radiated life. Maybe the comparison shamed him, that the least of these could have so much more courage and life, so much more self-regard. Roosevelt took to referring to everyone at Warm Springs as “polios.” And I think he was now one of them — as strong as the youngest link in the chain.

I’m sure the natural buoyancy of the 88-degree water had an effect, too. It gave everyone the sensation of standing up and walking without aid — despite the fact there was and still is no known cure for the disease.

Whatever the magic, the man was healing, but more even, a fighter. He was happy again, but it was not the identical him. 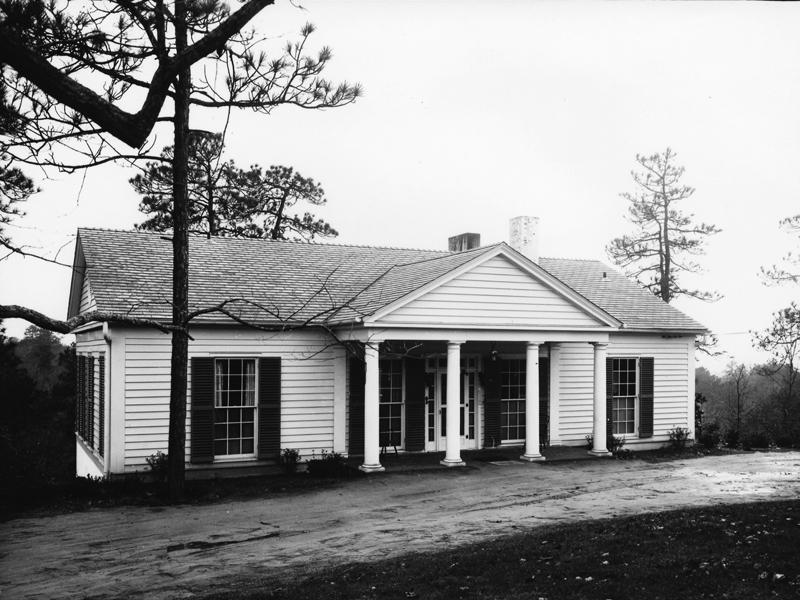 By 1926, this Yankee blueblood announced Warm Springs was his new home — to the shock of his mother and his wife’s dismay. Hyde Park was luxury’s lap. Georgia was one of the poorest states of the union, like much of the rest of the South: a predominantly rural society where running water, electricity, paved roads, rich soil, fresh vegetables or any kind of meat other than pork counted as true blessings.

In 1927 FDR cut the purse strings. He cashed in the entirety of his inheritance of $200,000 to build a polio treatment center that he named the Georgia Warm Springs Foundation. It was an elegant campus, modeled after the University of Virginia’s famous lawn and buildings. FDR stayed in a cabin at Warm Springs and began plans to build a home there. It would be little, and white — a little white house — and this was before he became president.

His vitality, stamina, and ambition were now stronger than ever. He had always been playful and ambitious. But his confidence was never of his cousin Theodore’s variety. It was more a cheerful determination, more humane.

He became governor of New York in 1928 — essentially drafted for the job by the Democratic Party of his home state — and then four years later, the man with a winning name was drafted again, this time to run for president in the midst of the worst depression ever.

He was ready for what awaited. In contrast to President Herbert Hoover, Roosevelt called for action, and his hopeful message echoed his own experience: there was nothing to fear but fear itself. His faith was authentic because it was born of a personal victory against all odds — exactly the challenge the country faced.

Before his first year as president was out, he used the occasion of his January birthday to plan a nationwide Birthday Ball campaign held in hundreds of communities, and he raised $1 million dollars for the Warm Springs Foundation for the treatment of new polio victims. 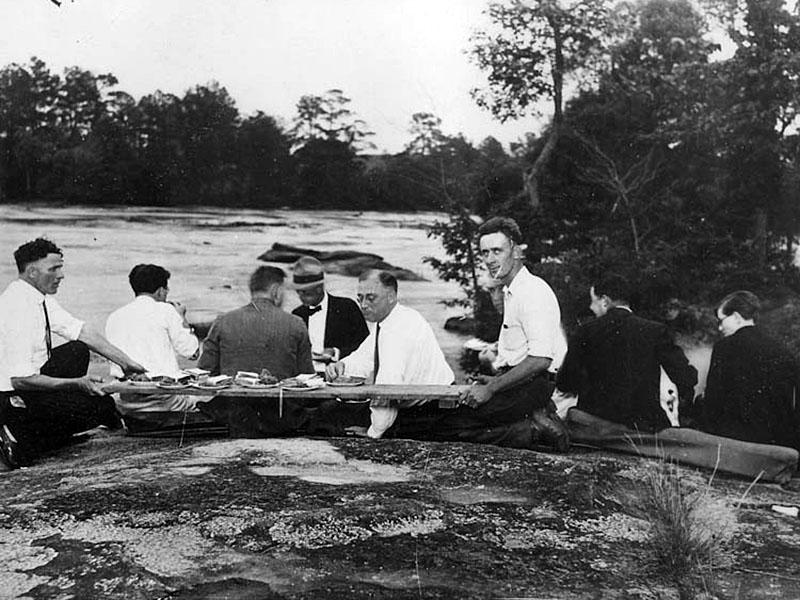 Roosevelt found hope and a purpose in Georgia. Here, he and friends enjoy a picnic by the warm springs. Courtesy of the Franklin D. Roosevelt Presidential Library and Museum

Then in 1937 he established the Poliomyelitis Foundation in New York for the support of research, and with radio personality Eddie Cantor they called for a “march of dimes to reach all the way to the White House.” The name stuck. And did the dimes march. By early 1945, the March of Dimes campaign raised $18 million for research.

FDR’s accomplishments are legion. He lived long enough to see the worst challenges to the nation and the world through. But his longest war, the one against polio, is one he would never see to the end. In 1947 alone, 27,000 new cases of polio were recorded.

Polio’s defeat finally came in 1955 with the development of the polio vaccine by Dr. Jonas Salk. It was Warm Springs, the poliomyelitis foundation, and the March of Dimes that supported Salk’s research. FDR, with the help of so many, had done it. Today, the polio vaccine has virtually eradicated the presence of the disease in the United States and in 99% of the world.

FDR is remembered for many things, but some of his achievements — bringing the United States out of the Great Depression and charting the course for victory in World War II, for example — have overshadowed his acts of philanthropy. Polio was the big war in his life that made him. And Georgia was at the heart of the story.

Philanthropy in small places, like Warm Springs, can have big results. This should inspire and give us hope and even confidence that good finds its own way of succeeding. Maybe not in our lifetime, maybe not in the places we look or expect. But it will happen.

If you’re interested in learning more about Roosevelt, his time in Georgia, and his fight against polio, check out A President in Our Midst: Franklin Delano Roosevelt in Georgia, a copublication of Georgia Humanities and the University of Georgia Press, by Kaye Lanning Minchew.