Waffle House, founded on Labor Day, 1955, celebrated another chapter in its history on Saturday, Sept. 8 with the unveiling of a new historic marker at its very first restaurant — located in Avondale.

On Saturday, Sept. 15, another historical marker will be unveiled at the site of the Second Atlanta International Pop Festival, which took place in 1970 in a musical extravaganza that was Georgia’s version of Woodstock.

What do these two events have in common? Both signs represent an expanded approach to the historical marker program now being run by the Georgia Historical Society.

“We want to tell the whole story,” said Robert Brown, chairman of the Georgia Historical Society (the first African American chair in its 173-year history) who also is an architect based in Decatur. “We believe in educating Georgia through our historical marker program.” 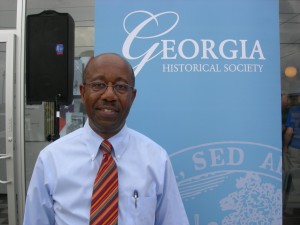 Todd Groce, president and CEO of the Society since 1995, said there has been a concerted effort to “reposition” the marker program and have it include multiple angles of the state’s history.

“We have tried to diversify the topics and not just diversify it with race and gender,” Groce said. “We have got an opportunity to teach people Georgia history in a new way — to make the past relevant.”

The Georgia Historical Society took over the historic marker program from the state in 1998. Before that, the program was run by the Georgia Department of Natural Resources.

Since the Society took over the program, it has erected 193 new historic markers. It also has replaced seven markers that had been missing that depicted General William Sherman’s “March to the Sea” during the Civil War. 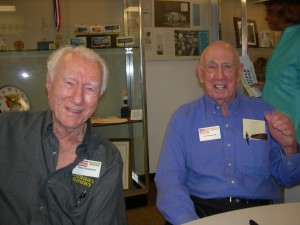 The marker program was begun by the state in the 1950s. And in all, there are about 2,937 markers throughout the state. Another three are scheduled to be erected by January.

“When we first did our survey of the Civil War historical markers, practically none were of African-Americans or of women,” said Groce, adding that the Society is dedicated to telling the whole story — even those that don’t portray the state in the best light. 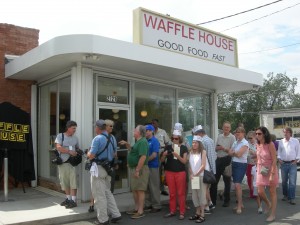 The first Waffle House, which is now a museum, in Avondale.

“Part of our mission is to teach Georgians about their past, not just to celebrate the past,” Groce said. That’s why there’s a marker on the lynching of Leo Frank in Marietta and another one for the largest sale of slaves — 436 men, women and children — in Savannah.

The Society also has put together a Civil Rights historical marker program highlighting the 50-year anniversary of the movement — which lasted from 1944 to 1973.

Another focus area will be on the history of Georgia’s companies — as displayed in the placement of the Waffle House marker this past weekend. 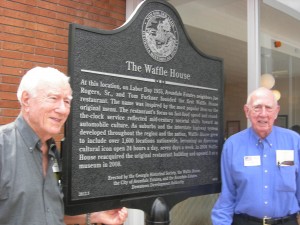 “I see this as the beginning of a new project for us and telling the story of Georgia’s corporate history,” Groce said.

At the Waffle House event, both co-founders of the chain — Joe Rogers Sr. and Tom Forkner — were enjoying the celebration of their 57-year history of chain, which now has about 1,600 restaurants across the country.

And they had not forgotten their roots in Avondale.

“We loved Avondale,” said Rogers, remembering how he bought his house for $14,000. “We should have stayed here. We would have had the house paid off.”

Before the ceremony, Rogers and Forkner signed photographs of themselves for the dozens of Waffle House fans who had come for the occasion. Many were clearly old friends of the founders and retired employees of the chain. 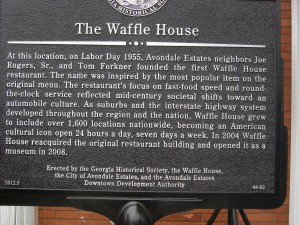 A close up of the new Waffle House historical marker

In order for the marker program to live up to its expanded potential, however, the Society will need to raise additional funds. It costs about $5,000 for each marker, and the Society tries to get half of it donated.

The Georgia Department of Natural Resources also has decreased the funding that it has been giving to the Society to manage the program from 75,000 in 1998 to $15,000 this past year.

And the competition for markers is intense, Groce said. It takes applications from the public, and there’s a review panel of historians that makes the final decision.

“We find ourselves now having to raise money for our marker program,” Brown said. “There are a lot of opportunities for new markers. We are in the process now of trying to develop a fundraising approach for our markers program.”