Starting Sept. 1, Georgians will be able to learn about great moments in Georgia’s history thanks to a partnership between the Georgia Historical Society and Georgia Public Broadcasting.

The “Today in Georgia History” segments will be broadcast on GPB’s television and radio stations across the state, and they all will be archived on the web. Each day, a new segment will be unveiled — focusing on an event or person associated with a particular day in Georgia history.

The Sept. 1 broadcast launch was unveiled at the Atlanta headquarters of GPB on Wednesday, Aug. 31 by Dr. Todd Groce, GHS President and CEO; and Teya Ryan, GPB’s president and executive director. 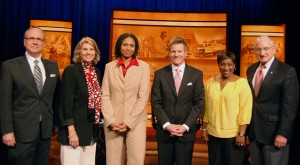 The “Today in Georgia History” segments are hosted by Dr. Stan Deaton, the senior historian at GHS.

“As a historian, you live for the chance to work on a project like ‘Today in Georgia History,’” Deaton said. “It’s a great opportunity research and write about fascinating people in our state’s history. To reach the kind of statewide audience that GPB reaches makes the opportunity even better.”

The segments also will become a valuable educational tool that can be used in Georgia’s classrooms. There is an interactive website that will maintain audio and video streaming of the segments as well as classroom exercises that can reach students of all grade levels.

The Robert W. Woodruff Foundation helped make the “Today in Georgia History” project a reality by providing a $900,000 grant in 2010. Production on the project began this pas spring.

Throughout the production process, I’ve learned so much about our state’s heritage,” GPB’s Ryan said. “We believe that ‘Today in Georgia History’ will really make this topic matter come alive for students as well as anyone who has an interest in developing their historical knowledge.”

For more information, go to www.todayingeorgiahistory.org.