A stock photo of a police car. (Photo by Michael Förtsch via Unsplash.)

Georgia was in the top three states for the killing of law enforcement officers in 2021. That’s according to new FBI data that shows the South leading the nation in line-of-duty officer deaths.

The FBI compiles the annual “Law Enforcement Officers Killed and Assaulted” statistics from local department reports. The 2021 statistics for officers who were killed were released on May 9. Statistics on assaults are expected in the fall.

The report says 129 officers nationwide were killed in the line of duty last year. Of those, 73 were “felonious acts” — meaning some form of homicide — and 56 were accidental.

The South had the highest death totals by far in both categories. The FBI uses a broad definition of the region that includes Arkansas, Delaware, Maryland, Oklahoma, West Virginia and Washington, D.C. But those jurisdictions had few deaths overall, with Georgia, Texas and Florida contributing most of the total. The Northeast, by contrast, had no felonious officer killings at all.

Georgia’s seven felonious killings of officers tied with Florida for Number 2 in the nation. Texas led with nine killings, and California followed at Number 3 with five killings. Georgia’s total equaled that of the entire West Coast, Alaska and Hawaii combined. 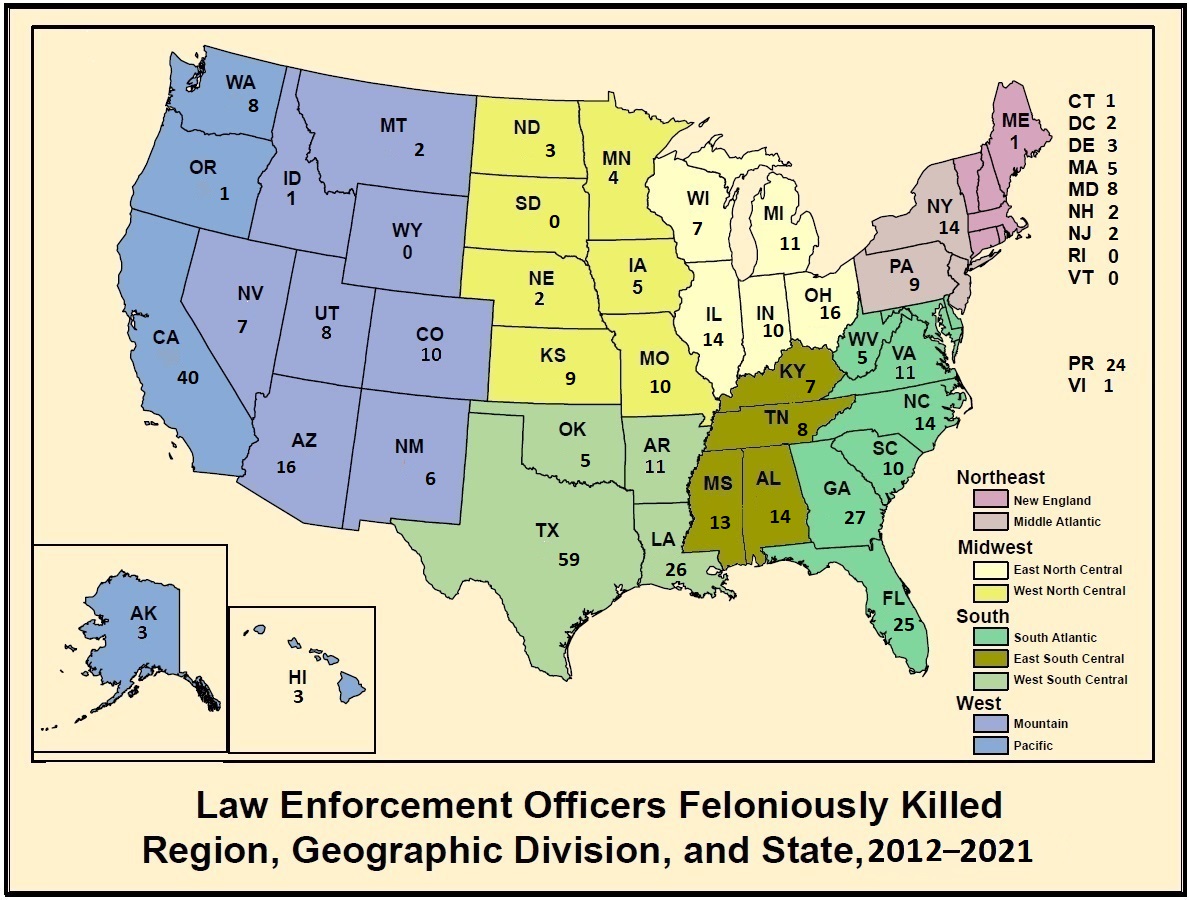 An FBI graphic showing the number of law enforcement officers feloniously killed in each state and region over the past decade.

Nationwide, the 2021 total of felonious killings was up from 46 in 2020, an increase of roughly 59 percent. The majority of the killings — 61– were by firearm. Six officers were feloniously killed when struck by vehicles.

The felonious killings happened during a wide range of police activities, from investigations and arrests to undercover work and domestic disturbance/violence calls. A total of 24 officers were killed in “unprovoked attacks,” the report says, and eight were “ambushed.”

A total of 66 suspects were identified in the 73 killings. Of those, 20 had prior criminal arrests and nine were under judicial supervision.

Accidental deaths also increased, up by 10 from 2020’s total. The majority of accidental deaths — 32 — involved vehicle crashes. But 20 cases involved the officer as a pedestrian who was struck by a vehicle. Four officers drowned.

In cases where an officer died while driving or riding inside a vehicle, most departments did not report whether the officer was wearing a seat belt. In the 12 cases with that information, seven officers were wearing a seat belt and five were not.