A student wears a mask amid COVID-19 pandemic learning in an undated photo from the Annie E. Casey Foundation’s 2021 “KIDS COUNT Data Book."

Georgia ranked in the bottom 13 of the 50 states on key child welfare measures heading into the pandemic, according to the 2021 edition of the Annie E. Casey Foundation’s “KIDS COUNT Data Book” report. While No. 38-ranked Georgia and the nation still showed improvements on most measures, policy changes are needed to make sure the pandemic doesn’t “erase nearly a decade of progress in child well-being,” the foundation says. 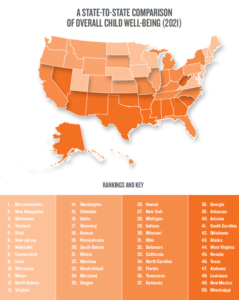 The overall state-by-state ranking of child well-being in 2019, with Georgia at No. 38, as shown in the Annie E. Casey Foundation’s 2021 “KIDS COUNT Data Book.”

The foundation is a Maryland-based charitable organization that funds child-welfare programs and influences government policy. The 2021 report, publicly released June 21, is based on 2019 data, so it does not include COVID-19 impacts. The report — but not its state rankings — does include new information from the U.S. Census Bureau’s “Household Pulse Survey,” a special information-gathering effort on how households weathered the pandemic.

“Many of these data expose holes that were already present, newly torn or widened in the safety net of public programs and policies designed to catch families during a crisis,” says the introduction of the foundation’s report. “The data also suggest that children of color have been more likely to experience hardship during the pandemic. Children should not go hungry in the richest country in the world. Families should not have to forego medical care. Parents should not endure unceasing anxiety about being evicted. None of these conditions are acceptable. We must work to help all kids as our nation continues to navigate this crisis and the road to recovery.”

Georgia remained at No. 38 in the overall rankings of “child well-being” for the second year in a row. Massachusetts was No. 1 and Mississippi was No. 50. States in the North and Northeast dominated the top 20, while the South and West dominated the bottom 20. (The District of Columbia and U.S. territories were not ranked.)

“In these states, families with children are more likely to struggle to bounce back from the pandemic — and racial and ethnic disparities are poised to grow even larger,” the report says of the bottom 20, including Georgia. And, the report notes, the South and West are also regions with population booms: “In other words, the states adding the most children are also the places least prepared to help kids and families succeed.”

The ranking is based on measures of four “domains”: economic well-being, education, health and family and community. Each domain in turn has four “indicators,” such as rates of insurance coverage, child deaths and high-school graduations.

While Georgia’s overall ranking remained low and unchanged, it improved in 13 of the 16 indicators over 2018 numbers; two other indicators remained the same and only the rate of low-birth-weight babies got worse, which is a national trend. And in comparison with other states, Georgia’s domain rankings showed one significant improvement over the 2020 report (which used 2018 data): the health ranking was No. 40, up from a dismal No. 46. However, economic well-being ticked down from No. 35 to No. 36. The education and family and community rankings remained the same, at No. 37 and No. 39, respectively.

Nationwide, the domains were the same or better in all but one indicator: the number of babies born with low birth weights, which increased by two-tenths of a percent between 2010 and 2019 to 311,245. And 10 of 16 indicators saw improvement, including all of the economic well-being indicators. There were persistent racial and ethnic disparities, however.

The full report, as well as interactive material featuring raw data, can be read on the foundation website.

Gains and losses for Georgia children

Georgia showed improvement in some of the detailed statistics that the foundation highlighted. They included:

There were losses and challenges as well. Basic educational proficiency showed some slow-downs or losses. The report says 69% of eighth-grade students scored as below-proficient in math, the same as the 2020 report, and 68% of fourth-grade students scored as below-proficient in reading, 3 percentage points down from the 2020 report.

The U.S. Census surveys found new challenges during the pandemic. Among the Georgia results were that 14% of households with children reported not having enough to eat “sometimes or often” in the previous week; 17% of students did not have reliable internet and access to devices for remote learning; 14% of Georgia adults living in households with children lacked health insurance; and 20% of those adults reported “feeling down, depressed or hopeless.”

The report was issued with a press release containing calls for action from some of the foundation’s partners and funded organizations in Georgia.

“Georgia was moving in the right direction in some areas prior to the pandemic, though with clear room to improve,” said Gaye Smith, executive director of the Atlanta-based nonprofit Georgia Family Connection Partnership. “The Household Pulse Survey, however, clearly shows that the pandemic posed serious struggles for Georgia’s families and communities. Investing in our people and seizing every opportunity that materializes from this past year that has been unlike any in our lifetimes will have a profound positive effect on our communities long after this pandemic is behind us.”

The foundation noted that the federal American Rescue Plan Act contains some major child-welfare policies that it called for, including $123 billion in funding for K-12 school systems and a one-year expansion of the federal child tax credit.

But the foundation has several other policy proposals that it says federal and state lawmakers should pursue. They include: